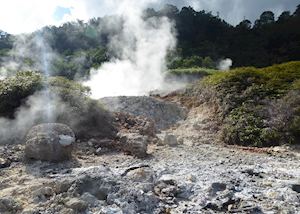 Makassar is mostly Muslim, and tours can be arranged with the imam of a local mosque if you’d like to learn more. Large chunks of the south are predominantly Christian — stop in the village of Sengkang and you’ll see a Jesus statue taller than Rio’s Christ the Redeemer — but head to the Tojora region and you’ll find a people who practise Christianity alongside animalistic beliefs. 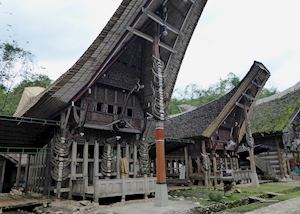 North of Toraja are the relatively impenetrable mountains of central Sulawesi, which we suggest eschewing (by a short domestic flight) for the northernmost peninsula. 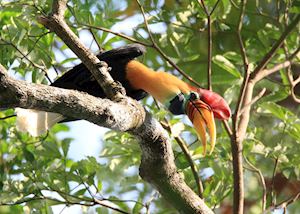 Sulawesi sits right atop the coral triangle, widely considered the richest marine environment in the world. Some of the best spots are around the jungle-topped headlands of the northern peninsula. Around the islands of Bunaken Marine Park snorkellers and divers can see reef sharks, eagle rays and turtles against a backdrop of flourishing coral.

Just around the coastline, world-class divers travel to the Lembeh Strait to muck dive (the search for tiny critters on the sea floor). Along the volcanic-sand floor you might spot a tiny but highly venomous blue-ring octopus, kaleidoscopic shrimp or pygmy seahorses.

Temperatures are relatively consistent, hovering between a comfortably warm 20 to 35°C (68 to 95°F). Dry season normally falls between April and October and while we consider Sulawesi a year-round destination, the wettest months tend to be January and February.

Featuring heavily on our experiences of visiting Sulawesi, these selected places are destinations that also prove consistently popular with our travellers. Our specialists can help you choose how to include them in your wider trip, based on your preferences.

This sample itinerary will give you an idea of what is possible when you travel in Sulawesi, and showcases routes we know work particularly well. Treat this as inspiration, because your trip will be created uniquely by one of our specialists.