What to do in Indonesia: our highlights guide

The Indonesian archipelago’s 18,000 islands span a couple of million square kilometres of territory between Asia and Australia.

Bali is the obvious star and this guide covers my choices for its lesser-known beaches. But it also focuses on the further flung Indonesia: its people, traditions and landscapes.

Wildlife experiences include seeing orangutans and Komodo dragons. And straddling the Ring of Fire has blessed Indonesia with thumping volcanoes like Mounts Bromo and Merapi. Plus it's a land of outstanding beaches and delicate mini-archipelagos.

Well, the southern resorts have the white-sand beaches. But, I’d say the best place to go in Bali to experience the quieter, local side of life along the coast is Pemuteran up on the north-eastern tip of the island.

At Pemuteran, in lieu of sand, you cross hard coral by walking along pontoons, from which you jump to snorkel. The setting is the Bali Barat National Park, which has coral gardens as vivid in colour as a Matisse painting as well as good rainforest trekking inland.

Nearby Menjangan Island is a local boat run away and, with good drop offs on the south side and super reefs to the north, one of the best dive spots I’ve found in Bali.

In the east of Bali, the beach in Candidasa is peerless. The volcanic sand here is black, made from tiny basalt fragments that glisten in the sunlight.

In contrast to neighbouring Bali, the beaches of Lombok Island are deliciously quiet. You won’t find beach hawkers and you can swim right off the beach, whereas southern Bali has crunching surf. True, you’ll still encounter bars and nightlife, but without the overdevelopment or crowds.

The main town of Senggigi has white-sand beaches and coral of the like you won’t find in southern Bali. The close-by Gili Islands are seven minutes away by boat, and you can spend a happy half-day snorkelling its reefs, and swimming with the occasional turtle.

The payoff is terrific, but climbing Mount Rinjani is only for seasoned walkers. It generally takes six to seven hours to make the ascent to the rim of the volcano, half under the rainforest canopy and half through exposed rocky terrain.

I’d suggest a two-night trek, hitting the volcano’s 3,726-metre summit on the second day. The volcano is active, but the crater is filled with a startlingly green lake. Getting up for sunrise after camping at the crater rim, the views from the top, of the lake and the surrounding mountains, are well worth the effort.

The Komodo dragons roam freely over the rugged islands that make up this protected reserve, a scattering of islands east from Lombok. There’s no accommodation on the national park, so I’d suggest basing yourself on a live-aboard boat. As well as being close at hand to the dragons, the blue sea invites you to dive in long before breakfast.

Because of the dragons’ free-rein nature, trekking is adventurous. Two rangers accompany each group with sticks to prod any over-curious lizards on the nose with, but you’ll have good opportunities for photographs nonetheless. During my last tour the dragons were only two metres away at times.

Komodo – the main island - has bigger dragons, whereas Rinca – the second biggest island - has more of them. It’s always easy to see dragons hanging around the ranger stations, enticed by the smell of the rangers’ cooking, but the real treat is when they emerge from the bushes mid trek.

You connect to this series of islands by first flying from Bali to Flores, a few islands to the east. Boats depart from here to explore the national park.

Sunrise at the world's largest temple

Climbing the ancient stone steps of Borobudur Temple on the island of Java is a thrilling experience at any time of day, but the air of expectation is greatest in the stillness and hush of pre-dawn.

Pick your way past the bell-shaped stupas, choose a place to sit at the top and prepare for a dramatic sunrise. Clouds blush in deep reds and oranges, and stone-carved mini stupas and Buddha statues around you take shape in the growing light. With luck, you’ll even see the cone silhouette of distant simmering volcano Mount Merapi.

Sitting in lush jungle, the ornately carved pyramid of Borobudur was built in the 9th century and is a masterpiece of Buddhist craftsmanship.

It combines brilliantly with the nearby temple complex of Prambanan - tall pointed stone towers smothered in relief carvings - a gargantuan exercise in one-upmanship completed by the Hindu civilisation about 50 years later.

Watching a performance of the Ramayana Ballet – a mix of dance and music without words - or a kecak dance (rhythmic chanting) at Prambanan is a wonderfully evocative experience of Javanese culture, and something we book in advance for many of our travellers.

Mount Bromo volcano in eastern Java is one of Indonesia’s best-known and most beautiful sights and it’s well worth the effort of catching sunrise here. Try and get to the viewing platform nice and early. You’ll be rewarded, as I was, by the big orange glow appearing and expanding out on the horizon. In the foreground, cloud trapped in the volcano basin resembles a lake and sometimes you can see wisps of smoke rising from Bromo’s crater.

Four x 4 vehicles will transport you back down from the viewpoint into the Sea of Sands - an eerie desert terrain from where you stop and walk to Bromo's crater rim. There’s a man-made staircase with areas off the side for resting, but the climb only takes 15 minutes. At the edge you’ll peer into the huge and still-smoking conical pit.

Indonesia shares the island of Borneo with Malaysia, and with it one of the world’s two wild populations of orangutan. The best option to witness these creatures is to fly into Pangkalan Bun airport and then travel half an hour to Kumai on Indonesian Borneo’s south coast, where you will meet your crew and board a klotok – a long wooden riverboat with a shallow draught. The boats are private hire, yours to sleep in an air-conditioned cabin or with a mattress on deck surrounded by mosquito nets.

Far from light pollution, shooting stars and constellations of fireflies are a near certainty. And even on the first night you’ll hear the distant call of orangutans, before seeing them close up at the Camp Leakey rehabilitation centre the next day. The area isn’t enclosed and they’ll walk or swing by at close quarters on their way to the food, in one of the few places where you’re pretty much guaranteed to see them in good numbers.

Funeral ceremonies in Sulawesi and Sumba

Sulawesi is an island easily reached from Bali or Java. The south is home to the Taroja people, animists who build sweeping roofed houses to keep spirits at bay and enact funeral ceremonies on a grand scale. In fact, the Taroja can store a body for up to 10 years while saving up for the funeral.

The family builds seating and houses for guests and a ceremony lasts three days. Anyone hoping to join in has to turn up with a gift though (I took a bag of sugar, which seems the present everyone wants) to pass to the family elder.

These ceremonial burials aren’t for the faint hearted, as the sound of animals being slaughtered is upsetting. The procession is a total contrast though - villagers wear colourful clothes and make-up and there’s a strong community feel.

Reaching the area means a 10-hour transfer from the island’s Makassar airport.

Funeral processions also take place in eastern Indonesia’s Sumba, an island of green rolling hills and rice terracing. The funeral season here, as in Sulawesi, is July and August.

Manado in north Sulawesi has tremendous marine life, including the intriguing examples that you’ll discover when ‘muck diving’ – sinking to the seabed sediment and getting face down in the hunt for creatures.

Lembeh Island is a few kilometres off Manado and has some of the best muck diving on the planet. The creatures stand out against the dark grey volcanic sand by virtue of their brightness. There’s the mimic octopus (that changes shape to look like other animals), the grandly named orangutan crab and manta shrimp, and sea slugs in neon-vivid colours.

To the west of Manado, laid-back Bunaken Island has colourful coral and larger marine life, such as barracuda. Topside is the Tangkoko National Park, a rainforest where you’ll spot tarsiers (16cm long and the world’s smallest primate), black-faced macaques and the curious looking, endemic maleo bird.

Manado is more suited to intrepid travellers but there are direct flights from Singapore and across Indonesia.

Of all Indonesia’s islands, a luxury cruise on a large yacht around the Raja Ampat archipelago by West Papua is the most exclusive.

Fly from Bali to Sorong and cruise through an area that is a Mecca for divers. Cruising by day and anchored up at night, you’ll pass lush little islands poking out of the water, see birds of paradise, learn of the region’s importance to the spice trade, and have the chance to meet local tribes people onshore.

Unlike the rest of Indonesia, the best time to explore Raja Ampat is from December to February. 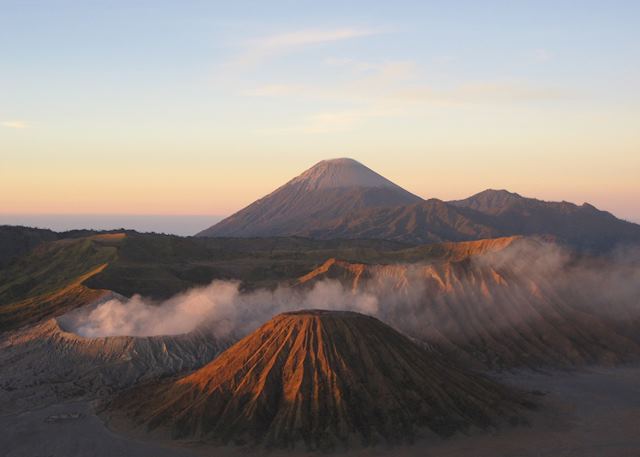