Indonesia rarely feels like a single country, but on Flores you sense this more keenly. A few islands along the chain from Bali, it sits as the gateway to more remote adventures. You can sail to Komodo National Park, snorkel the protected waters of the 17 Islands Marine Park and climb the sacred peak of Mount Kelimutu. And, unusually, Catholicism is the dominant faith, with church spires punctuating Flores’s skyline between volcanic ranges and clusters of thatched-roof homes.

Like most places that have remained off radar, it takes time to get there, and you’ll need a healthy tolerance for long car journeys. But you’ll be rewarded with an otherworldly jungle landscape borne out of volcanism and a series of pristine surrounding islands that look like they only recently rose from the indigo waters.

Getting to and around Flores

The simplest way to get to Flores is to fly into Bali, which has good long-haul flight connections. After a night in Bali, you can catch a domestic flight across to Labuan Bajo on the western tip of Flores.

I journeyed by road, with a few detours by boat, from Labuan Bajo to Ende in the east, which has a small domestic airport. Detailed in order below, you’ll need a minimum of ten days to complete my route, not including travel to Flores (and I’d suggest time on Bali if you haven’t been before). Throughout my trip I was accompanied by a driver and guide — a necessity in an area where English is rarely spoken and the roads need to be tackled in a 4x4.

My guide, Kamil, was local to Flores, living in Labuan Bajo. He explained how traditional the island still is: it took him seven years to save up for the three water buffaloes and five pigs needed as a dowry to marry his wife. The majority of islanders are farmers and his job as a guide earned him a wealth of respect in the town.

From Labuan Bajo Airport, we made the short drive to a nearby jetty to board the MV Keti. This converted fishing boat, now a private charter, would be my home for the next few nights as I explored Komodo National Park. UNESCO protected since 1991, the park’s islands have remained undeveloped and the only way to explore is by sailing the Flores Sea. By mooring close to the islands, you can be first to step foot on shore the next morning.

On board, there’s a small double cabin with a tiny en suite, and enough deck space for you to laze under the flapping sails. The small crew includes a chef, who prepares simple — you’re likely to eat rice three times a day — but fresh meals. I suggest a two-night stay, as this gave me enough time to explore. With no set itinerary, days can be tailored to your interests, whether you’re eager to snorkel, dive or visit the islands.

Komodo National Park includes two major islands, Komodo and Rinca which rise out of the sea like the spines of a prehistoric sea monster. Sailing toward the national park, you can also stop at low-lying Kalong Island. The mangroves here are so thick that you can’t see the land underneath, and clusters of black bats hang from the treetops.

We waited until sunset, and watched as the sky filled with clouds of flying foxes. These huge bats — with a wingspan up to 1.5 m (5 ft) — fly to nearby islands to dine on fruit.

Both Komodo and Rinca are sanctuaries for the Komodo dragon. Mostly, they roam the coastline and, despite their size, they hide surprisingly well. Although I was aware of their status as the largest reptile in the world, the dragons were far bigger than I’d expected — as long as me.

It’s compulsory to walk the islands with an official guide, whose level of English is basic, but will have sharp eyes and a detailed knowledge of the terrain. The guides are armed with a large stick — enough to deter any over-curious lizards from getting too close. The dragons may take the glory, but you might also come across wild horses, deer and wild pigs scrabbling through the undergrowth.

Paths are scored into the auburn earth and lead to some of the higher points. From the top of Rinko, the view is a panorama of Komodo’s peaks rising from the ocean.

The islands are among the driest parts of Indonesia, and plenty of drinking water is essential to trawl around the desert-like terrain, which is punctuated by pockets of spongey scrubland.

By contrast, life thrives underwater. In-between spells exploring on land, you can sail among coves, snorkeling or diving down to the coral.

At Manta Point, in the strait between Komodo and Rinca, you can ride the gentle current alongside reef manta rays. They reminded me of giant white handkerchiefs slowly gliding through the water. Bigger than Komodo dragons, they can reach 4 m (13 ft) wide, and I had the slight trepidation that if one opened its mouth, I might accidentally swim in.

After disembarking back at Labuan Bajo, I began the journey southeast to Wae Rebo, a village of the Manggaraian an ethnic group native to Flores.

Before the Portuguese renamed it, Flores was known as Nipa, meaning serpent, and as you drive along the Trans-Flores highway, you run alongside the jagged spine of the island.

It’s a seven-hour drive to Denge, a small village near Wae Rebo, with no places for a rest stop. My guide overcame this by knocking on the door of a house in a passing village to ask if I could use the facilities. The whole family came out to greet me with enthusiasm, welcoming me into their home with big hugs.

You stay the night in a guesthouse in Denge before the three-hour guided trek through subtropical forest to Wae Rebo, which is set on an isolated patch of land in the highlands. The forest trail winds steeply through densely packed palms, which provide welcome shelter from the heat. Breaking from the tree cover as I entered the village, the skyline was nothing but undisturbed forest-covered ridges.

One of the only traditional villages left in Flores, Wae Rebo is a circle of mbaru niang — cone-shaped, thatched houses like a collection of pointy witches hats. I was first ushered into the largest house: we needed to ask the elders for permission to stay. Next came a short welcoming ceremony of sacred drum playing to ask the ancestors’ spirits to approve my arrival. I was then free to explore.

Typically, the scene that might greet you is of women sat weaving traditional songket cloth (still worn by many of the men), children playing football, and huge piles of harvested coffee beans drying in the sun. I’m not an enthusiastic coffee drinker, but the freshly brewed coffee I was offered was some of the best I’ve tasted.

A different family lives in each home (although many have second homes in Denge), and one building has been converted into an open-plan guesthouse. I spent one night sleeping under the palm-fibre roof on a tikar (a woven, stuffed mattress) made from pandan leaves. In the evening I joined a household for dinner, crouching around their open fire as we ate banana fritters, sweet potatoes and rice.

If Riung were any easier to get to, I’m convinced that it would be packed. A seven-hour drive from Denge, this north-coast fishing village of thatched, stilted houses is an ideal base for exploring 17 Islands Marine Park.

Despite the name, the marine park is a series of 24 beach-edged islands with water clear enough to rival the Maldives.

My guide procured the services of a local fisherman and his boat for the day, which you spend hopping between islands, stopping to snorkel among the coral gardens. I was usually the only person in the water, with a pick of empty beaches. Lunch was freshly caught fish and squid, cooked on a simply assembled wooden frame over a fire on the sand.

The coral is in good condition and you’ll notice a variety of fan corals, some the size of dinner plates in clusters and others that rise delicately from the sea floor like slips of lace. At almost every snorkeling spot there seemed to be a scattering of blue starfish as well as tiny, seahorse-resembling trumpet fish.

I suggest reserving two nights in Riung, so you can spend a full day on the water. Its convent offers overnight accommodation, with basic, air-conditioned private rooms. There’s no hot water, but it’s unlikely to matter it’s so warm here.

Indonesia’s scenery has been crafted by millennia of volcanic activity, and Flores is no different. Mount Kelimutu, a seven-hour drive from the 17 Islands Marine Park, is distinctive with its trio of crater lakes at the summit. Each lake stands out from the others, too, tinted by differing levels of minerals and oxidisation, and changes shade throughout the year.

Locals believe the lakes are vessels for departed souls. Tiwu ata Mbupu (lake of old people) is typically a dark-blue shade and sits alone to the west. Tiwu Nuwa Muri Koo Fai (lake of young men and maidens) is usually a bright turquoise and is separated by a thin crater wall from Tiwu Ata Polo (bewitched lake), which is often a rusty red and thought to contain the spirits of wrongdoers.

I stayed in one of the spacious individual villas at Kelimutu Crater Lakes Eco Lodge, near the base of the volcano, to set off to the top early the following morning.

My guide and I drove up the volcano to a car park on the slopes. From here it’s a 40-minute walk to the summit. I bought a cup of fresh coffee from an entrepreneurial local to clutch as I watched the sunrise illuminate the surrounding rolls of jungle-covered hills.

To return to Bali and its international flight connections, you can catch a flight from Ende, a coastal town a few hours away from Mount Kelimutu. If you’d like to visit the volcano without driving across Flores, you can fly straight in to Ende from Labuan Bajo. 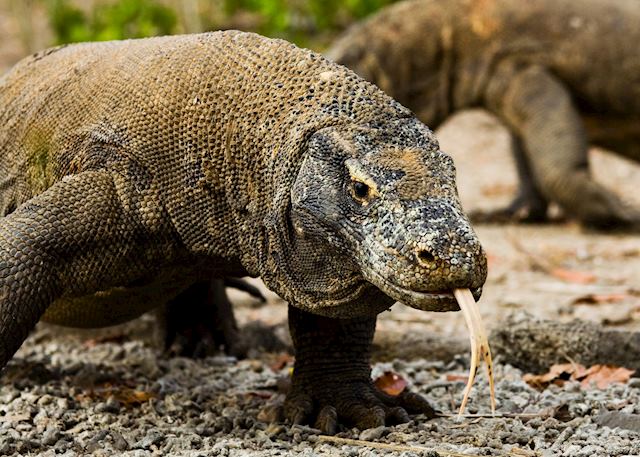