The island of Sumba is rarely visited by foreign tourists although there has been a steady increase in the last 20 years.

The initial attraction has been the beautiful local ikat cloth but more recently it has become famous for its diving and secluded beaches. It is an easy two hour flight from Denpasar on Bali and the island offers tranquillity and white sandy beaches, so this is the ideal place to head for if you are looking for traditional tribal culture mixed with a relaxing beach stay. 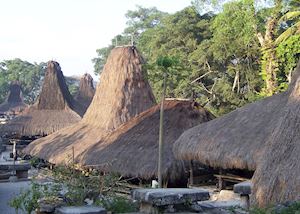 Sumba's barren and inhospitable landscape combined with the fragmented political structure, ensured that any attempt at conquest would be a thankless and unrewarding endeavour for European colonists and archipelagic empires. This has allowed the old ways to remain alive and along with the slave trade through the 18-19th centuries has kept Sumba's population significantly lower than the otherwise overcrowded islands that dominate the rest of Indonesia.

Along with Timor, Sumba is part of the southern arc of islands in Nusa Tenggara that were formed by raised coral reefs, limestone and sedimentary rock, unlike the volcanic origins of Lombok, Sumbawa, Komodo and Flores. There is also strong evidence to suggest that Sumba may in fact be an island fragment torn off northern Australia.

The east Sumbanese are largely dependent on the export of cattle, water buffalo and the famed Sumbanese horse. It is also home to the island's most stunning ikat and is often shipped to Bali to be sold around Kuta, although the best is normally kept on the island to be used in burials and ceremonies. Few traditional houses remain and virtually the last of the old tombs at Melolo are in a poor state. The region is however home to possibly Sumba's oldest village, Prailiang, and the small collection of traditional homes are certainly located in one of the most stunning settings on the island. There are no hotels of note on this side of Sumba but as many of the flights arrive or depart in Waingapu people will often spend a short while in this region.

Western Sumba receives significantly more rainfall than the arid east and as a result is home to about two thirds of the island's population. For people visiting Sumba this district certainly has the most to offer, with long stretches of perfect white sand beaches, excellent diving and surfing opportunities and the best preserved traditions of the islanders animist beliefs. Ancient tombs, high priests, ceremonies and sacrifices are all a part of life here. We can arrange trips to the most important tombs and villages for you, but some of the best occasions are the ceremonies and rituals that you may visit and because these are never planned more than a few days in advance you will only hear about them through your guide or hotel.

This sample itinerary will give you an idea of what is possible when you travel in Sumba, and showcases routes we know work particularly well. Treat this as inspiration, because your trip will be created uniquely by one of our specialists.

Map view Places in and around Sumba

Places in and around Sumba

We’ve selected a range of accommodation options for when you visit Sumba. Our choices usually come recommended for their character, facilities and service or location. Our specialists always aim to suggest properties that match your preferences.