Kamakura City is situated in the southeastern part of Kanagawa around one hour to the south west of Tokyo. 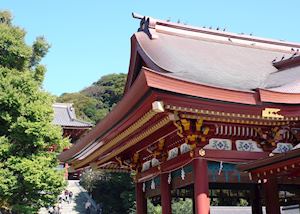 One side of the city faces the sea and the rest is surrounded by mountains, so it was used as a natural fort during the battle age. The history of Kamakura goes back to the year 1192 when the Shogun Yoritomo Minamoto established his shogunate to rule Japan, centreing on Kamakura as the capital.

There are many historical sites for sightseeing, mainly temples and shrines that are scattered around in this 800 year old city. For Tokyo-ites this tranquil seaside town is a favourite getaway from the hustle and bustle of the city.

Kamakura is also home to the Great Bronze Buddha.

This sample itinerary will give you an idea of what is possible when you travel in Kamakura, and showcases routes we know work particularly well. Treat this as inspiration, because your trip will be created uniquely by one of our specialists.