The ruins of Kabáh are situated to the south of Mérida, near glorious Uxmal, to which it was connected by a stone causeway or "sac-be".

Kabáh competes with its larger city in the majesty and beauty of its palace façades. It is a monumental example of the Puuc style architecture in which each stone element is part of a total, linking men with its universe. 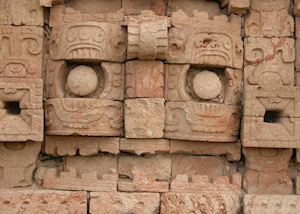 Recent investigations indicate the zone was inhabited in 250 BC and reached its splendour in the 8th and 9th centuries AD.

This sample itinerary will give you an idea of what is possible when you travel in Kabáh, and showcases routes we know work particularly well. Treat this as inspiration, because your trip will be created uniquely by one of our specialists.