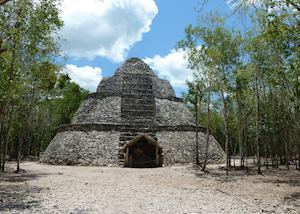 As many as 50 "sacbes" (ancient roads) led into this huge Mayan city centre, one of them over 62 miles long — the longest in the Mayan world. Today few people live in Cobá, leaving one to ponder how such a great city fell into complete decline.

Our itineraries will give you suggestions for what is possible when you travel in Cobá, and they showcase routes we know work particularly well. Treat them as inspiration, because your trip will be created uniquely by one of our specialists.