A first-timer's guide to Chichén Itzá

Built between the 9th and 12th century, the sacred city is located 75 miles east of Merida, and covers an area of approximately six square miles where hundreds of buildings once stood. It is a beautifully restored collection of stepped pyramids, temples, columned arcades and other stone structures that were inhabited by the Maya between 750 AD and 1000 AD. Its centrepiece is the magnificent Pyramid of Kukulcan (or El Castillo), which was named one of the New Seven Wonders of the World in 2007 and rises to about 100 feet. We highly recommend a visit as part of your holiday to Mexico, as it is a fascinating site with an interesting history.

We suggest flying into Merida or Cancun and then taking our Chichén Itzá tour or hiring a car. The journey takes around two to three hours by car. You can fly direct from Gatwick with British Airways or Virgin as well as with Condor Airlines from Manchester. Our specialists recommend spending a full day at the site to fully explore without rushing. Spring and autumn equinoxes offer the chance to see the incredible shadow serpent of El Castillo but the often crowded site is extremely packed at these times.

November to April is an ideal time to visit Chichén Itzá on a holiday to Mexico, avoiding the rainy season and the coldest months. You can find out more about the weather in Mexico in our 'Best Time to Visit' section. We would recommend staying at a hotel close to the site, enabling you to visit before the day-trippers arrive and when it's still cool. See our accommodation ideas further down in this guide.

At Chichén Itzá you can visit the spectacular Cenote Sagrado, a large sinkhole that measures 60 metres in diameter. All sorts of treasures have been found here including rings, necklaces, gold and jade objects, as well as the bones of young women that were thrown into the water as an offering to Chaac, the Mayan rain god.

Chichén Itzá's ball court is the largest in the Americas. Measuring over 160 metres long and 70 metres wide, Mayan men played a game called Pok Ta Pok here. Anthropologists believe that the object of the game was to hurl a ball through a ring that was mounted on a wall, seven metres above the ground. Each team had six field players who would attempt to pass the ball — using any body part except their hands — to their captain who would attempt the shot using a racket of sorts. The captain of the team that made the first successful shot was then decapitated as a sacrifice to the gods. This was seen as an honour and guaranteed entrance into heaven. 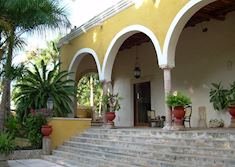