Chichén Itzá is the most famous of the Mayan archaeological sites in the Yucatán, and the best restored, providing a vivid insight into how the city would have looked at its peak. Due to the high numbers of day trippers that engulf the site, we recommend visiting as early in the day as possible for the chance to wander among the towering pyramids in relative peace. The site itself is vast and, although you are no longer allowed to climb any of the structures, it is intriguing to explore.

The smaller and less crowded ruin of Uxmal, to the south of Mérida, has a more mystical feel than Chichén Itzá. Dedicated to the rain god Chac, it is unusual with ornate and intricate murals decorating the temples and many of the ruins remaining uncovered creating a more authentic feel. 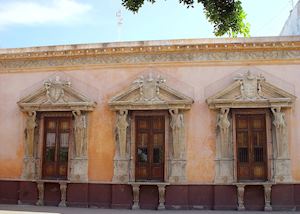 The city of Mérida boasts some impressive colonial housing, colourful markets, a 16th century cathedral and an art museum of local crafts. All the main attractions are within easy reach and it is a good base for exploring the surrounding area.

Featuring heavily on our experiences of visiting Yucatán Peninsula, these selected places are destinations that also prove consistently popular with our travellers. Our specialists can help you choose how to include them in your wider trip, based on your preferences.

Map view Places in and around Yucatán Peninsula

Written by our specialists from their own experiences of visiting Yucatán Peninsula, these guides will help you make the most of your time there. We share both our practical recommendations and the best ways to appreciate Yucatán Peninsula at its best.