Dating back to 1524, it is considered the longest continually-inhabited city on mainland Central America. 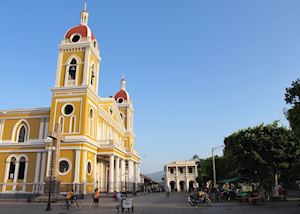 Today, Granada is the most visited city in Nicaragua; and a key place to stay on any trip to the country; drawing locals and travellers alike with its wonderful colonial and neo-classical architecture, colourful cobbled streets and laid-back, easygoing atmosphere.

Either strolling the streets or relaxing in the main square this is a wonderful place to watch the locals throng around food stalls, discussing politics and work with ever-present soothing traditional music playing in the background; or you can take a historical ride in a horse drawn carriage around the city.