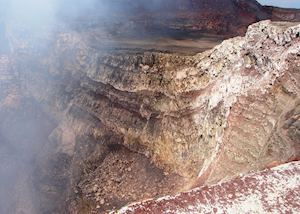 The main attraction is the huge Santiago Crater which has formed between the Nindiri and Masaya volcanoes. Throughout the 1900s there were frequent eruptions until, in 1985, the craters collapsed; even now sulphurous gasses still bellow forth and you can hear the lava thundering past below ground.

Our itineraries will give you suggestions for what is possible when you travel in Masaya Volcano National Park, and they showcase routes we know work particularly well. Treat them as inspiration, because your trip will be created uniquely by one of our specialists.