A sun-drenched stretch of Mediterranean shoreline west of Málaga, the Costa del Sol has been one of Spain’s most popular destinations for more than half a century. And, with an average of 320 days of sunshine a year, a host of beaches and a backdrop of mountains, it’s easy to see why. Development was rapid, and the coast is now lined with high-rise blocks. But, with views of the north African coast, a host of traditional whitewashed villages in the hills, Moorish influences in the old city cores, and easy access to Granada, Córdoba and Seville, it makes a convenient spot to base yourself or relax at the end of your trip.

Despite its reputation as a resort destination, I go to the Costa del Sol for its history and culture. Archaeologists are always uncovering new Roman ruins here and the old Moorish section of Marbella town is fascinating. It’s also the best place to have gazpacho.

Things to see and do in the Costa del Sol

Often overlooked by visitors to the coast, Málaga has had a dynamic resurgence in recent years. Its handsome historic core has been cleaned up, new art galleries are opening all over the city, the port area has been revamped and there’s a palpable vibrancy in the young crowds that throng its many bars and restaurants.

Málaga is also home to a grand Gothic cathedral, a Roman amphitheatre and an 11th-century castle, the Alcazaba, which, if you don’t have time to visit the Alhambra, offers a good overview of Moorish architecture. On top of this, you’ll find some of Spain’s best tapas and seafood here. 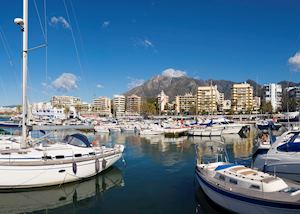 Marbella is the Costa del Sol’s most glamorous resort town, attracting the rich and regal in equal measure. Luxury yachts line the marina at Puerto Banús, and designer shops and supercars line the streets.

Venture back from the waterfront promenade to the casco antiguo, the old town, and its winding whitewashed lanes, courtyards filled with orange trees, independent shops and flower-strewn balconies feel like half a world away.

Marbella’s Museo Ralli is also worth a visit to see a collection that includes work by Salvador Dalí, Joan Miró, Henry Moore and Marc Chagall.

Nicknamed the ‘Costa del Golf’, the coastline is Spain’s premier golf region with more than 70 golf courses. Many hotels have their own courses, there are a host of golf academies, and it’s possible to arrange tee times and club hire at some of the most renowned courses.

May and September are good times to visit the Costa del Sol, when the region is less crowded and temperatures hover around 20°C (68°F). From June to August, the area is thronged with holidaymakers and temperatures average about 26°C (79°F), but are often considerably higher. However, with pleasant weather and fewer crowds, the area still makes a fine place to visit throughout the winter as well.

This sample itinerary will give you an idea of what is possible when you travel in Costa del Sol, and showcases routes we know work particularly well. Treat this as inspiration, because your trip will be created uniquely by one of our specialists.

We’ve selected a range of accommodation options for when you visit Costa del Sol. Our choices usually come recommended for their character, facilities and service or location. Our specialists always aim to suggest properties that match your preferences.