The museum’s frontage is a neoclassical design of pillars and cornices. Inside the galleries, the walls and domed ceilings are painted pale taupe or cream, allowing the artwork to step forward.

Predominately a collection of paintings and sculptures, this isn’t a comprehensive assembly of Spanish art. Instead, it shows the whims of Spanish monarchs who focused on collecting as many paintings as they could of their preferred artists. This has resulted in the largest collections of paintings by El Greco, Goya and Rubens in the world. Their flair for using a rich palette can be seen in later artists’ works as the royal aesthetic preferences begin to influence the development of Spanish painting.

Diagonally opposite the Prado is Villahermosa Palace, a neoclassical brick building that has been remodelled to house the Thyssen-Bornemisza Museum. While the Prado and Sofía concentrate on the classical and the contemporary respectively, the Thyssen’s broader collection ranges from 13th- to 20th-century works — although has become best known for its Impressionist collection. Walking around the collection is an all-encompassing journey from Benedictine abbey frescoes to abstract Rothko canvasses.

On warm days, Madrileños (Madrid’s residents) gather from across the city to laze on El Retiro’s lawns, paddle a boat across its artificial lake or share a cool drink on one of the terrazas (terraces) across the park. It’s all a long way from El Retiro’s original purpose as a private retreat for 17th-century Felipe IV and his courtiers.

The focal point of Madrid’s largest green space is a semicircle of great columns that curve around a bronze and marble monument to Alfonso XII, who’s astride his horse and guarded by mermaids and lions. 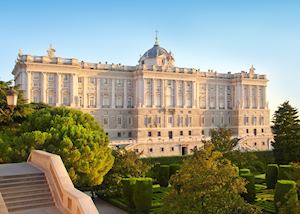 Visit from September to November or March to May and you should enjoy dry, warm days that average around 15°C (59°F). If you don’t mind cooler temperatures and the occasional shower, in winter (December to February) the sites are quieter and hotels reduce their rates. Despite high temperatures, July and August can be very busy and some restaurants and shops close as Madrileños leave the city to holiday.