Bilbao once had a run-down, seen-better-days feel about it, its fringe of rusting cranes and boarded-up warehouses a strong reminder that this was a port city in a post-industrial slump. But then, in the late 90s, an artistic and architectural renaissance came and woke it from its slumber — not just Frank Gehry’s Guggenheim, but Santiago Calatrava’s arcing, helix-like footbridge. Something of the city’s former soul lingers on, too, in the Casco Viejo (old town). This 14th-century quarter is a warren of tight-knit dwellings, independent shops, bakeries and standing-room-only pintxos bars — the Basque answer to tapas. And it’s all less than a 90-minute drive from San Sebastián, from which it can be easily visited in a day.

Gehry’s Guggenheim is like a modernist cathedral; the swooping lines are unparalleled. But, Bilbao’s architecture is not just limited to the Guggenheim, it’s an enthralling city to explore with incredible modern buildings sitting alongside a charming historic core.

Things to see and do in Bilbao 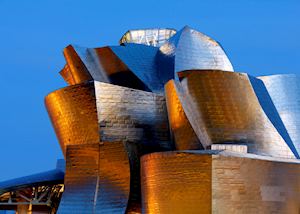 This head-turning modern and contemporary art museum rises up from the city’s Nervión riverfront like a vast silver ship. Architect Frank Gehry drew his initial sketch for the building freehand, in a single continuous stroke, and has since said that he gathered inspiration from the city’s seafaring and river-trading history. In fact, the structure had to be constructed using computer technology intended for the aviation industry.

Once you’re inside the museum, views of the surrounding city and river compete with the collections. Alongside temporary exhibitions, there are works by Rothko, Warhol, Anselm Kiefer, Basquiat and Robert Rauschenberg (to name a few) on permanent display. Homegrown Basque artists such as Eduardo Chillida and Jorge Oteiza also have a large presence.

We suggest also making time to explore the museum’s outside space by strolling around its perimeter. Here, you can get up close to Louise Bourgeois’ Maman, a sculpture in tribute to her mother of a giant spider protecting its egg sac. There’s also Jeff Koons’ Puppy, a giant Yorkshire terrier covered entirely in flowers.

Artistically, anything goes: past exhibitions have included hyperrealism, performance art and El Greco. It also has more breadth to its collections than the Guggenheim: here, you’ll find everything from works by Van Dyck and Gauguin to Pop Art. Spanish and Basque artists, including painters Ignacio Zuloaga and Juan de Echevarría, are also well represented.

Lying amid the soft-focus green hills and rippling farmland of the Basque Country is the unassuming small town of Guernica. It’s a slightly workaday place with a cobbled square, a neoclassical assembly hall and a clutch of good pintxos bars. However, it’s now synonymous with Picasso’s work of the same name, which he painted in 1937 after Nazi Luftwaffe bombs decimated the town at the request of Franco’s fascists.

Picasso created his vast monotone mural in just 35 days, painting with a white-hot rage at the destruction of so many innocent civilians — the attack was purposely timed to coincide with a busy market day. Picasso reflects this in his painting, depicting the floundering bodies of horses and bulls amid his fractured Cubist shapes, as well as human figures in agony.

Walk the street Pedro de Elejalde Kalea and you’ll see a replica of the painting coating a wall: the original hangs in Madrid’s Reina Sofia Museum.

Spring (March to May) offers ideal weather for exploring the city. Temperatures are pleasant, a far cry from the oppressive heat of summer, and so this season lends itself to walking around and exploring the town.

Our itineraries will give you suggestions for what is possible when you travel in Bilbao, and they showcase routes we know work particularly well. Treat them as inspiration, because your trip will be created uniquely by one of our specialists.