Barcelona is a vibrant city, combining the best of modern innovation with an easy Mediterranean character. Its dynamic atmosphere, eclectic blend of architectural styles and the diverse nature of its main districts make it a fascinating place to explore. This half-day private guided bicycle tour aims to introduce you to some of the city’s finest landmarks, as well as hidden corners that you might otherwise miss. Riding through the waterfront Barceloneta area, with its cafes, bars and beaches, you’ll get a look at the city’s sun-drenched coast. You’ll then head inland to the Gothic Quarter to see a more historic side of Barcelona.

Your guide for the tour will meet you at your hotel, from where you’ll walk or taxi to the tour starting point. You’ll pick up your bicycles, be fitted with helmets and take off for a two- to three-hour ride around the city’s streets, taking in some of the main sights as well as quieter side streets en route.

Led by your local guide, you’ll get a deeper insight into the city as you ride. You start off in the Barceloneta area, where the city’s well-to-do spend their time relaxing in the cool Mediterranean breeze on the beach or in one of the many waterfront cafes or marinas. You’ll stop here for some snacks in a local tapas bar with your guide, who can introduce you to some of the region’s many specialties.

From here, you head to the Gothic Quarter with its winding narrow streets, peaceful squares and ancient buildings. At its heart is the grand medieval cathedral, which comes complete with its own resident flock of geese. Nearby are the remains of ancient Roman temples left from the city’s time as a focal point of the Roman Empire.

You’ll also get a chance to tour some of Barcelona’s pedestrian areas such as La Rambla, a series of five smaller streets connected as one long thoroughfare lined with shops and cafes.

While here, you’ll stop at another tapas bar for part two of your guide to regional Spanish food. When you’ve had a rest and some time to chat to your guide, you’ll return to the bicycle shop in the Gothic Quarter to bring back the bikes and continue your day at leisure.

Photos of Barcelona by bicycle 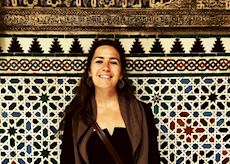