Sri Lanka is becoming one of the most successful places to see both blue and sperm whales, which can be found off the island's southern coast.

The best time to go is between December and April when the sea is calm and these spectacular mammals traverse the Sri Lankan waters. During this period the chance of spotting whales and large pods of dolphins is very likely, often only a few miles off the coast.

Group departures generally leave Mirissa Harbour, near Dondra Point at around 7am returning later in the morning or early afternoon depending on the sightings. Life jackets are provided on board the boat.

Mirissa Harbour is only about 40 minutes from the city of Galle depending on traffic.

Other experiences in Galle 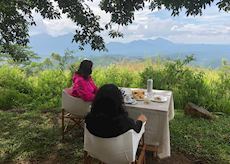