Flanked by two mountain peaks on the shore of a palm-lined glacial lake, the city of Lugano lets you enjoy a taste of Mediterranean culture in view of the Swiss Alps. A great base from which to explore the Italian-speaking canton of Ticino, Lugano boasts a mild climate and the fresh food and wines that come with it. Sunny Ticino’s Alpine peaks, chestnut forests, olive groves and pristine lakes make it a popular destination for Swiss visitors in the warmer months. Lugano’s food scene, including the traditional lakeside grottoes that serve only simple, local menus, partakes of the Italian influence at its border.

Originally a Roman settlement, Lugano’s cobblestone streets are paths to history and culture. The location also gives you easy access to Lake Como and Milan, less than an hour away. The Bernina Express, one of Switzerland’s most scenic train journeys, links Lugano to St. Moritz, higher in the Alps.

Things to see and do in Lugano 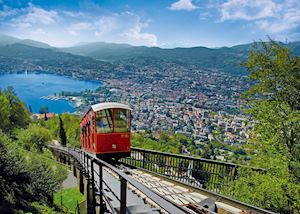 Lugano is situated on the lake of the same name, and while the main town forms a crescent around a curve in the shoreline, it’s flanked by two mountains that afford excellent views of the town below. You can ascend both Monte Brè and Monte San Salvatore by funicular, and get views of the red roofs and shimmering lake from both directions.

Both mountains offer restaurants with terraces at their peaks, though San Salvatore is a little more built-up than Monte Brè. You can hike around the mountains to get the best views. Sunset is a particularly good time to go.

The only place outside Italy where Italian is the official language, Ticino’s food and wine also have an Italian accent. We can arrange a walking tour of Lugano that will let you sample the local produce of the region.

The area is best known for its honey, chestnuts, wine and cheese, though olive groves also feature in the landscape, and a local olive oil is pressed here.

Dotted along the shores of the lake are traditional grottoes — simple restaurants that serve a small menu of only local fare. These are worth a visit on their own, but we can also arrange a boat cruise from Lugano to one of these grottoes on the lake’s opposite shore, where you can learn how to make risotto from fresh, local ingredients. You'll enjoy relaxed Ticino hospitality, wine and nibbles while a local chef helps you to prepare your risotto, then you'll dine on the results.

One of Switzerland’s most scenic rail journeys and a designated UNESCO World Heritage Site, the Bernina Express runs from the high Alps of Chur in Switzerland to Tirano in Italy, near the Swiss border. An express bus, part of the same route, links Lugano directly to Tirano, where you can board the train toward St. Moritz.

Aboard the panoramic train cars, you can glide smoothly through sun-drenched countryside, up pine-covered mountainsides, over viaducts and past glacial waterfalls. This impressive feat of engineering is the world’s steepest railway that doesn’t make use of cogwheels. 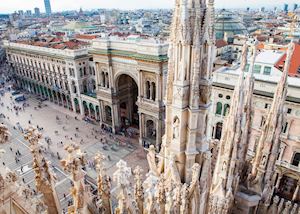 With Italy just 45 minutes away, it’s easy for you to take a quick trip over the border to Lake Como or Milan. Lake Como's mountain-backed villages are filled with centuries-old villas, lush greenery and cinematic landscapes. The area has been used in many films, including Casino Royale and Ocean’s Twelve.

Milan, Italy’s fashion capital, is a bustling metropolis, second in population only to Rome. It also houses some of the country’s greatest artistic and architectural treasures, including the immense Gothic Milan Cathedral, the 4th-century Sant Ambrogio and La Scala opera house.

Due to its mild climate, Lugano is a good place to visit year-round. It gets busy in July through September, when the weather is warmer and Swiss people from other regions flock to Lake Lugano’s sunny shores. The winter months, from December to March, still see pleasant weather and are an excellent time to visit the Alps just to the north. 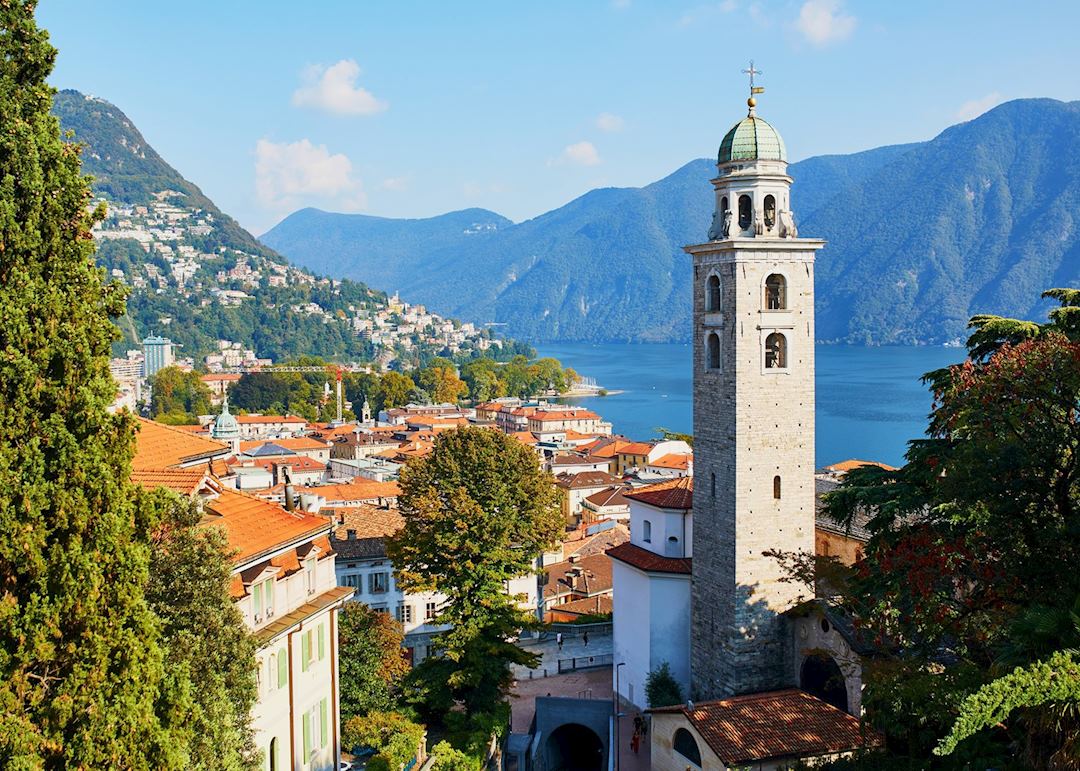 Start planning your trip to Lugano

We’ve selected a range of accommodation options for when you visit Lugano. Our choices usually come recommended for their character, facilities and service or location. Our specialists always aim to suggest properties that match your preferences.

Our specialists seek out authentic ways to get to know the places that could feature in your trip. These activities reflect some of the experiences they've most enjoyed while visiting Lugano, and which use the best local guides.