Two lakes, a towering waterfall and the Harder Kulm mountain in the gateway to the Jungfrau region, Interlaken

Interlaken literally means ‘between the lakes’, a name derived from the emerald-green lakes — Brienz and Thun — that flank the town. The low-lying resort at the base of the Jungfrau massif is an excellent jumping-off point for your exploration of the Jungfrau region.

Interlaken is the most well-known town in the Bernese Alps, but that’s mainly because of its strategic location. While somewhat crowded at times, it also makes a convenient base for exploring places like the Jungfraujoch, the Schilthorn and the other resort towns up the mountains that provide winter and summer activities for athletes as well as casual visitors and families.

Between adventures, you can stroll the Botanical Gardens or sip a cocktail at the Victoria Jungfrau Hotel and Spa. Walk the main shopping road to the two rail stations at either end of the town, connecting you to the network of funiculars, gondolas and cog railways that link the mountain peaks to the villages below. 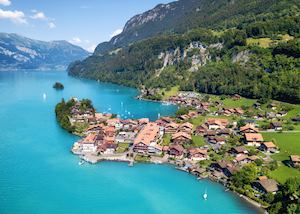 The most well-known town in the Bernese Oberland, Interlaken is the gateway to the mountains of the Jungfrau region, where summer and winter activities abound. The huge peaks of the Eiger, Mönch and Jungfrau mountains tower above the old-fashioned timber houses that make up the village.

Unlike the resorts higher in the mountains, mainly Wengen and Grindelwald, Interlaken sits at the mountains’ base in a low-lying valley. The Aare River runs through Interlaken, from where it begins in the glaciers to the south, and stretches through the village connecting its two lakes.

Interlaken itself isn't particularly large, and its main street, which includes the shopping district, connects its two rail stations, Interlaken Ost and Interlaken West. From these, you can take trains, busses and boats to regional sights.

Two popular attractions are the Jungfraujoch and Schilthorn, both high mountain destinations. The Jungfraujoch is known as the Top of Europe, and the train station there is indeed the highest on the continent. You reach the Schilthorn by cable car. Both offer observation decks, sporting opportunities, mountaintop restaurants and interesting historical attractions. The restaurant at Schilthorn, Piz Gloria, was used in the James Bond film On Her Majesty’s Secret Service.

Interlaken also has its own mountain, Harder Kulm. While it’s not as tall as its better-known brethren, it’s easy to reach and provides excellent views of the town, lakes, and mountains in the distance. Its restaurant, reminiscent of a castle, has a glass floor for viewing out over the platform to the world below.

Down in the valley, Lake Thun and Lake Brienz both beckon with their distinctive qualities. Calm Lake Brienz is turquoise, and you can take a steamboat ride to various destinations, including the Grand Hotel Giessbach and a 152 m (500 ft) waterfall that plunges into the lake.

Lake Thun catches the wind coming down from the mountains, ruffling its deep blue waters. Views of the Jungfrau are excellent from the lake shore, with nothing obscuring the vista. In the warmer months, it’s popular with windsurfers and swimmers.

We like Interlaken best in the warmer months between June and September, when the weather is sunny and the valley a bright green. Snow falls between November and March and temperatures drop, but the area is rich with winter sporting opportunities if snowshoeing, skiing or winter hiking are more to your taste. 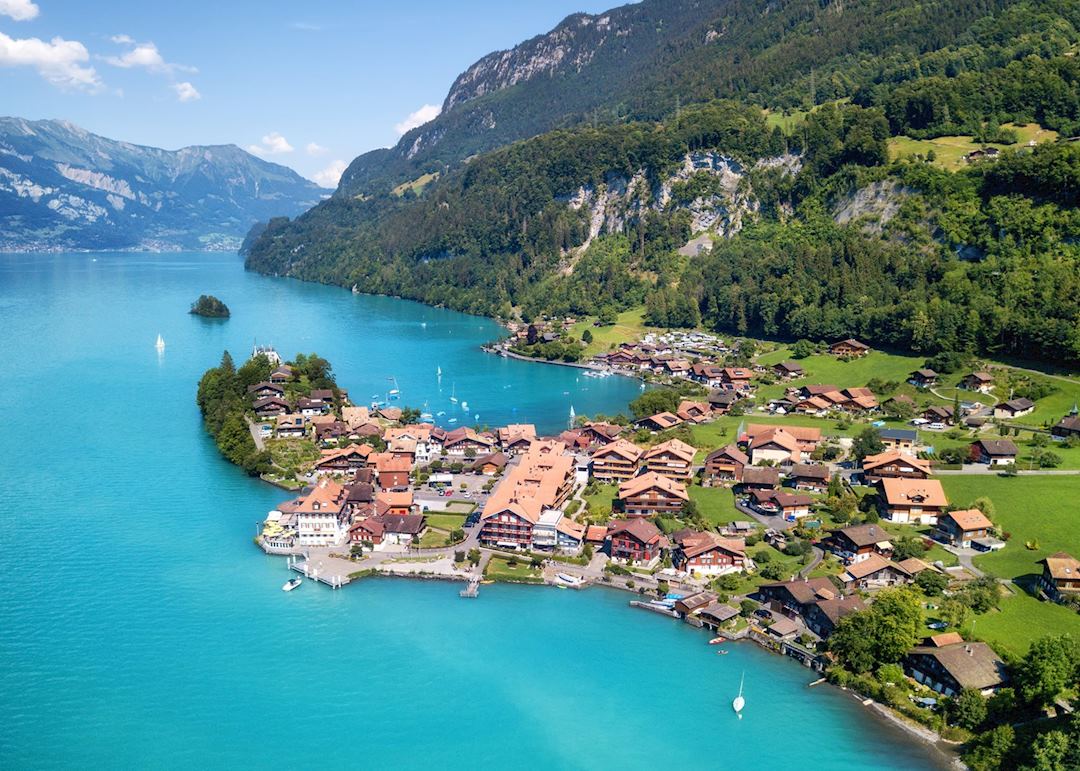 Start planning your trip to Interlaken

We’ve selected a range of accommodation options for when you visit Interlaken. Our choices usually come recommended for their character, facilities and service or location. Our specialists always aim to suggest properties that match your preferences.

Our specialists seek out authentic ways to get to know the places that could feature in your trip. These activities reflect some of the experiences they've most enjoyed while visiting Interlaken, and which use the best local guides.