Visit Sera monastery on the northern edge of Lhasa, whose title means ‘Merciful Hail’. Its name denotes its rivalry with the Drepung, since hail destroys rice and Drepung Monastery is also known as"Rice Heap". Founded in 1419 by one of Tsongkhapa's eight disciples, Sera became famous for its Tantric teachings. The warrior monks of Sera, the ‘Dob-Dobs’, were admired as athletes but also feared.

A central lane and fairly simple layout make Sera easy to explore. A long driveway leads up to the monastery. Sera had three colleges but the chanting halls and chapels seem dark and more demonic.

Today it houses some three hundred monks and its buildings include farms and printing workshops. Watching the monks engaged in their stylised debating is a real experience. 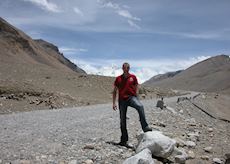