The train is well equipped with a restaurant car where meals, typically Russian in style (or Chinese when on-board the Chinese train) are served. The train also has an on-board doctor, tour director and a team of dedicated on-board staff.

A range of excursions are included throughout the journey, designed to offer a good overview of each destination along the route and in some cases these are experiences that would not be available when traveling by public train. Group sizes for each excursion are at a maximum of 26 people and although there is a predominantly German client base, an English-speaking guide will be guaranteed for your departure. For days spent on-board, a wide range of lectures and other activities such as caviar and vodka tasting are offered.

The train offers varying classes of travel ranging from standard two-berth compartments with shared washing carriages (Category I) to cabins that offer en suite facilities. Standard plus cabins (Category II and II New) are similar to those found in first class on normal Russian trains, with two lower berths and shared toilet facilities at the end of each carriage. Guests are also able to access shower compartments located in every second or third car.

Nostalgic comfort compartments (Category III), nostalgically furnished but with modern amenities, are well equipped with large upper and lower berths and an armchair. Neighboring compartments share a small bathroom that is equipped with a handheld shower. Where hotel nights are included within your itinerary, these are in three- and four-star properties. Bolshoi Class (Category IV) is equipped with two bunks, with the lower berth measuring slightly wider than the top at almost two meters. The compartment comes well equipped with a wardrobe, flat-screen television and DVD player. This class also boasts an en suite bathroom that can be turned into a wet shower room. Each carriage in Bolshoi category holds only six compartments with at most 12 guests sharing one carriage. Where hotel nights are included within the trip, these are in four- and five-star properties in Moscow and Beijing and in suites of standard hotels in Ulaanbaatar and Irkutsk.

Bolshoi Platinum (Category V) is the most luxurious class available, boasting the largest compartments offered on-board and similar amenities and berths as found in Bolshoi Class. These compartments also offer larger en suite bathrooms with separate shower cubicles. Where hotel nights are included within the trip, these are in four- and five-star properties in Moscow and Beijing and in suites of standard hotels in Ulaanbaatar and Irkutsk.

Please note that the Tsars Gold Train only carries passengers up to Erlian on the Chinese border, at which point guests change onto a Chinese train. Unfortunately this train does not offer Bolshoi Class Cabins (Category IV and V) and as such clients are accommodated in comfortable private cabins with two berths. Cabins are not en suite but guests do have access to shared washing and bathroom facilities. 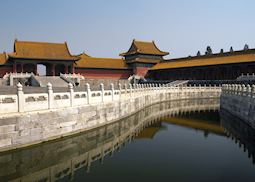