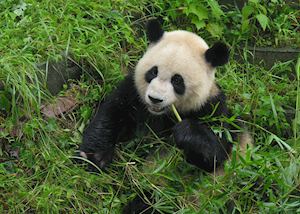 The Sichuan Province is renowned for its spicy cuisine, which often uses chilies and Sichuan peppers. Chengdu itself has been deemed a UNESCO City of Gastronomy for the diversity of its cuisine, which can be sweet, sour, bitter, spicy or salty.

During your visit to Chengdu, we recommend dining in local restaurants to sample the region’s key dishes, including kung pao chicken (a spicy stir-fry featuring chicken, peanuts, vegetables, chilies and Sichuan peppercorns) and, most famous of all, the Sichuan hotpot. This meal is usually a social affair as strips of meat and vegetables are cooked in a large pot of (often spicy) broth in the middle of the table and diners take turns to help themselves. 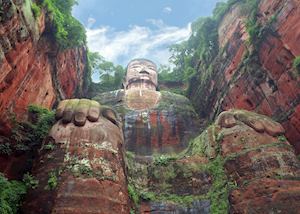 A two-hour drive from Chengdu, just outside the city of Leshan, you can set eyes on one of the largest Buddhas in the world. Carved into a cliff face overlooking the confluence of the Dadu, Min and Qingyi Rivers, the Leshan Giant Buddha rises 71 m (233 ft).

Emei town is a two-hour drive south of Chengdu, so you can take a long day trip or choose to stay overnight. An hour and a half bus ride, passing through forests of lush firs, takes you from the town to the Golden Summit cable car path. Once there, you have a short 3 km (1.9 mile) walk to the cable cars.

Around a 40-minute drive southwest of Chengdu, the historic town of Huanglongxi dates back to around 1,700 years ago. Its cobbled alleys and Qing dynasty architecture provide a glimpse into China’s past, and have helped the town become a popular filming location for movies and TV shows.

Our itineraries will give you suggestions for what is possible when you travel in Chengdu, and they showcase routes we know work particularly well. Treat them as inspiration, because your trip will be created uniquely by one of our specialists.