In keeping with the creative heritage of Montmartre, Terrass’’ Hotel champions an artistic theme throughout its rooms, reception and along its exceptional rooftop bar and bistro. The lobby is styled with vibrant modern art and a reception desk made from a repurposed grand piano, while rooms are evocative of a chic artist’s studio, featuring geometric-patterned flooring and designer furniture. Views look out either onto the inner courtyard or the rooftops of Paris, with a few rooms enjoying views of the Eiffel Tower in the distance. The Sacré-Coeur Basilica is also within walking distance of the hotel.

As its name would suggest, the hotel’s rooftop terrace is a particular highlight, with an expansive panoramic view of Paris to enjoy over a meal during the warmer months. Although the hotel has been built up since it was first opened in 1911, the original hotel banner is still visible and proudly showcased at the entrance to the terrace restaurant and bar.

The hotel also offers a welcoming library area with books on Paris and Montmartre, as well as a sauna, a massage suite and two fitness suites.

We love this hotel for embracing the artistic heritage of Montmartre, as well as for its location, its chic, stylish rooms and, most of all, its wonderful rooftop terrace bar and restaurant.

The rooms follow the hotel’s unusual design patterns, falling into one of two general themes. The Studio d'Artiste rooms evoke the feeling of being in a Parisian art studio: dark walls separate the bedroom and bathroom, with alternating wood and glass panels designed to resemble the tall studio windows typical of Montmartre. Others mimic being in the Paris metro system, making use of the subway’s signature black-and-white tiles. All feature bold palettes, contemporary designer furniture, high-speed Wi-Fi, flat-screen TVs, and sleek bathrooms with a walk-in shower or a shower with separate, free-standing bathtub. Outside, wrought-iron balconies offer views over the trees and rooftops of Paris.

Montmartre has long held a reputation for being a home for artists, as evidenced by the large number of studios and theaters spread throughout the district, including the famous Moulin Rouge, which is a five-minute walk from Terrass”. The hotel is about a 15-minute uphill walk from the stone steps of the Sacré-Coeur, and between five and ten minutes from three different metro stops, providing easy access to the rest of Paris.

A buffet breakfast is served in the rooftop restaurant each morning, comprising a selection of hot and cold items and freshly baked pastries. For lunch and dinner, choose from a menu of French classics, creatively interpreted with added flair, alongside a glass of wine from an impressive wine list. The rooftop bar has far-reaching views over Paris, serving everything from local wines to an extensive cocktail menu. There's also an indoor restaurant for colder evenings, but with floor-to-ceiling windows, being indoors won’t mean missing out on a good view.

There's a special Playzone area located next to the library for children. It includes a pool table, an arcade game and a few child-friendly books.

There are two gyms in the hotel, each filled with high quality fitness equipment. For something a bit more relaxing, there is the private Nuxe Spa, offering massage treatments, a sauna and a Turkish bath. There is also a quiet library filled with classic novels as well as plenty of books to learn more about Paris and Montmartre.

Our itineraries are there to spark ideas for how you could include a stay at Terrass" Hotel as part of your trip. Treat them simply as suggestions, because every aspect of the trip we create for you will be yours to define.

View all accommodation in Paris

Paris and nearby places 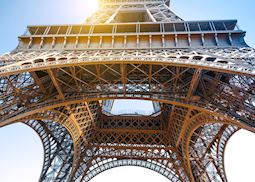