Overlooking the Seine estuary and for centuries an important seafaring and trade hub, historic Honfleur is one of the most appealing port towns in Normandy. Turner and Monet were lured here by its nest of narrow streets and waterside surroundings, and in many ways the town remains little changed since their time.

Tipsy-looking half-timbered houses line the narrow streets and visitors flock here from Paris and beyond to spend a weekend in the vicinity, or even just a day. Despite its popularity, Honfleur remains an enticing place to visit. Our specialists can help you get away from the busiest streets and see the town's authentic salty yet artistic soul in its lesser-known sights and quieter corners.

For me, visiting Honfleur is about enjoying a seafood lunch at one of the cafés alongside the old port and admiring the way that the brightly painted houses are reflected in the water.

Things to see and do in Honfleur

Once ringed by defensive walls to protect its precious port, Honfleur suffered badly during the Hundred Years War when much of the town was destroyed. As troubles settled and the port began to thrive, the town’s medieval fortifications were removed to provide construction materials for rebuilding the town.

During the 16th and 17th centuries Honfleur was one of the most important ports in France. Much of what you see today dates from that period, when elaborate half-timbered houses with slate roofs and stone mansions were constructed for the town's wealthy salt merchants.

Honfleur's Vieux Bassin, the Old Dock, remains at the very heart of the modern town. Lined on one side by a jumble of teetering houses which date from between the 16th and 18th centuries, it's strongly reminiscent of a period in Normandy's maritime history that has been long lost elsewhere.

These incredibly tall, narrow houses open onto both the old dock and, on the floor above, the street behind them. Many are protected by slate tiles. All are different in shape and size, and many have brightly shaded awnings. They overlook the pleasure craft that now bob in the water, as well as the small maritime museum opposite. Its sits in a deconsecrated 13th-century church on the eastern quay.

Once the residence of the town's governor, this 18th-century building sits at the mouth of the old port. It’s Honfleur's last remaining vestige of its medieval fortifications and once guarded a significant gateway to the inner town. On one side is one of the original gates into the town, which once controlled entry into the port (and therefore the town itself).

It's a many-tiered building, adapted and extended as necessary over the years, but gives a solid impression of how the town's fortifications would have looked. Beside it is a plaque commemorating local explorer Samuel de Champlain who set sail from here in 1608. He would go on to found Québec.

The Enclos', the old town, sits to the east of the Vieux Bassin, its maze of tiny lanes and alleyways lined with an assortment of rickety old townhouses, fishermen's cottages and stone mansions.

This part of the town was inside the walls of the medieval fortress, and remains remarkably untouched. It gives an insight into how medieval settlements across the region must once have looked, with half-timbered houses leaning at impossible angles along the narrow, cobbled streets.

Look out for the large 17th-century salt warehouses on Rue de la Ville. Today they often host exhibitions and concerts, but they were originally used to store salt before it was shipped to the cod fishermen of Newfoundland. 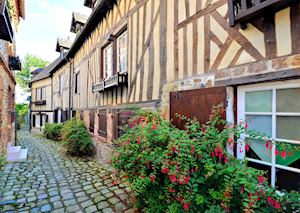 Wandering around the winding streets of the old town is one of Honfleur's greatest pleasures. Every time you come out of your hotel and choose a new route you'll happen upon new laneways, each more endearingly crooked than the last.

La Rue de la Prison is particularly characterful, and is home to the Museum of Ethnography and Folk Art which is set in the quirky 16th-century, timber-framed former town prison. Inside you'll find displays on medieval living in the region with traditional clothing, furniture and homeware depicting life as it once was. Farther on, the tunnel-like Rue des Petites Boucheries was where the town's butchers once traded.

A wooden church constructed by local shipbuilders in the late 15th and early 16th centuries, Saint Catherine's Church has long outlasted its original function. The building was constructed as a cheaper, temporary replacement for the original church on the site which was destroyed in the Hundred Years’ War. At the time, stone was needed to strengthen the town's fortifications in case of further attack. And so it was the shipwrights who built the church in a form they knew best. With twin naves and a double-vaulted roof, the interior gives the impression of being inside the upturned hull of a ship.

Along with the atmospheric streets, Honfleur has a glut of art galleries and a number of worthwhile museums. Local artist and early Impressionist Eugène Boudin was the first to bring Honfleur to the attention of the wider world, but soon many others followed. In the Eugène Boudin Museum west of the Vieux Bassin, you can see a variety of depictions of the town and the Norman landscape by artists such as Dufy, Monet and Boudin.

Farther west is the Satie Museum. It’s set in two houses that once belonged to the eccentric avant-garde composer Erik Satie, who lived and worked in Honfleur. The surreal, surprising, and whimsical rooms have been wittily devised to bring his music and eccentric outlook to life.

Honfleur hosts a market every Wednesday and Saturday morning, as well as numerous festivals throughout the year. The Pentecost festival on Whit Monday in May or June, and the Fête des Crevettes (Shrimp Festival) held during the first weekend in October, are particularly worth attending.

Our itineraries will give you suggestions for what is possible when you travel in Honfleur, and they showcase routes we know work particularly well. Treat them as inspiration, because your trip will be created uniquely by one of our specialists.

Our expert guides to exploring Honfleur

Written by our specialists from their own experiences of visiting Honfleur, these guides will help you make the most of your time there. We share both our practical recommendations and the best ways to appreciate Honfleur at its best.

We’ve selected a range of accommodation options for when you visit Honfleur. Our choices usually come recommended for their character, facilities and service or location. Our specialists always aim to suggest properties that match your preferences.

Our specialists seek out authentic ways to get to know the places that could feature in your trip. These activities reflect some of the experiences they've most enjoyed while visiting Honfleur, and which use the best local guides.