Set on an island between two branches of the Indre River, the Château d'Azay-le-Rideau is harmoniously proportioned with handsome turrets and intricately carved stonework reflected in the still water. The castle appears to rise directly from the water and is a masterpiece of French Renaissance architecture. Our specialists visit regularly and can help with insider tips on visiting this and other Loire Valley chateaux. 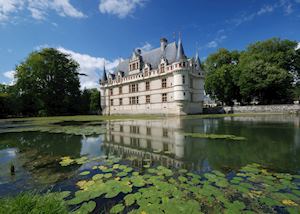 Built between 1518 and 1527, by Gilles Berthelot, Treasurer-General to the king, Azay-le-Rideau was a demonstration of his great power and wealth. However, the castle was never completed as political turmoil forced Berthelot to flee the country. King François I seized the chateau and gifted it to one of his knights-at-arms, Antoine Raffin, who only undertook minor alterations. Although the original plan was quadrilateral in design, only two sides of the intended courtyard were ever built, thus giving the building its unusual L-shaped structure.

Apart from its envious setting, the castle's most renowned feature is the three-story, open-sided staircase in the courtyard. Double bay windows are surmounted by carvings of the salamander and ermine of François I and his wife, Queen Claude, while inside carvings on the ceilings depict previous French kings.

The castle interiors are generally neo-Renaissance and date from the 19th century, when the castle was owned by Marquis Charles de Biencourt. Suffering financial difficulties after his death, his widow was forced to sell the chateau, and the building was emptied and its furnishings sold off.

It was subsequently acquired by the state and has slowly been refurbished. The rooms are once again laid out in the style of the Biencourts, faithfully reproduced from the sales records and images of 1899. Period furniture, 16th- and 17th-century Flemish tapestries and a substantial collection of art fills the rooms.

The chateau has undergone a major restoration project in recent years, and you’re now able to tour the attics to see the complex construction of the remarkably well-preserved wooden roof frame, which was made from wood cut in the winter of 1518-1519. An exhibition explains the construction techniques and tools used at the time.

Outside, English-style gardens and parklands extend across to the other side of the river. Planted with sequoia, cedar and American tulip trees and laced with winding pathways, they offer long-range views of the castle.

This sample itinerary will give you an idea of what is possible when you travel in Château d'Azay-le-Rideau, and showcases routes we know work particularly well. Treat this as inspiration, because your trip will be created uniquely by one of our specialists.