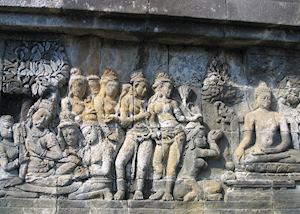 The temples are some of the most spectacular you will see — Borobudur features the largest and most complete collection of Buddhist relief sculptures in the world. This shrine to Buddha took 75 years to complete and offers a guide for those wishing to follow the noble path of enlightenment. To the northeast of Yogyakarta is the huge Hindu temple complex of Prambanan. Built in the middle of the 9th century, about 50 years after Borobudur, it is thought to have been constructed to celebrate the return of a Hindu dynasty to Java.

Finally, Java is surrounded by volcanoes — Mount Butak to the west, Mount Arjuna to the north, and Kepolo and Bromo to the east — Malang is one of the most beautifully situated cities in Java.

Featuring heavily on our experiences of visiting Java, these selected places are destinations that also prove consistently popular with our travelers. Our specialists can help you choose how to include them in your wider trip, based on your preferences.

Map view Places in and around Java

Our expert guides to exploring Java

Written by our specialists from their own experiences of visiting Java, these guides will help you make the most of your time there. We share both our practical recommendations and the best ways to appreciate Java at its best.