This remote area is considered to be one of Japan's 'three hidden regions'.

Its tall peaks and deep gorges were historically a safe haven for the Heike Clan after their defeat by the rival Genji Clan during civil wars of the 12th century. Today the residents of the Iya Valley are struggling to preserve their traditional ways.

In 1973 the American author of 'Lost in Japan', Alex Kerr, bought an 18th century thatch-roofed farmhouse in Higashi Iya and has since been restoring it to its original brilliance. He named the house Chiiori (Cottage of the Flute) and in 1998 the Chiiori Project was founded to join in the battle to keep the house and the village alive.

The farmhouse is open to visitors and guests and hosts weekend activities such as thatching for example. 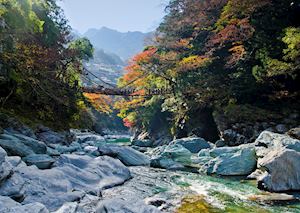 Other places of interest are Mount Tsurugi, the Kazurabashi vine bridges that are suspended high over the Iya-gawa river gorge and the restored houses of Buke Yashiki and Kimura-ke.

For those looking for a little more excitement, rafting tours are available during the summer months (April - November). Please do mention this if you would like to book a trip.

This sample itinerary will give you an idea of what is possible when you travel in Iya Valley, and showcases routes we know work particularly well. Treat this as inspiration, because your trip will be created uniquely by one of our specialists.

We’ve selected a range of accommodation options for when you visit Iya Valley. Our choices usually come recommended for their character, facilities and service or location. Our specialists always aim to suggest properties that match your preferences.