West of Tokyo, as the tower blocks and skyscrapers thin out, the landscape gradually turns green and mountainous as you enter Fuji-Hakone-Izu National Park — usually referred to as Hakone National Park — which encompasses a number of hot spring towns and snow-crowned Mount Fuji.

With a backdrop of dense alpine forest and volcanic peaks, Hakone is spread along the shores of Lake Ashi. The national park is fed by mineral-rich thermal water from the region, which supplies the traditional inns (ryokan) with their hot spring baths (onsen).

Hakone also has museums to explore and art galleries to peruse, and our specialists suggest spending a few nights here to explore properly. Speaking from personal experience, we can also recommend which ryokan to stay in and how best to enjoy the mountain scenery from the comfort of a hot spring.

On the main bullet-train line between Tokyo and Kyoto, Hakone is easy to slot into an itinerary that features both cities.

Soaring above Hakone National Park is the snowy cone of Mount Fuji. The peak has inspired Japanese art and literature from 9th-century poetry to the 19th-century prints of Hiroshige. 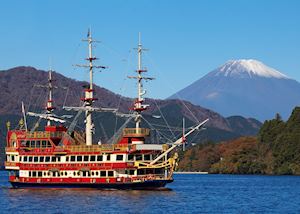 Mount Fuji is notoriously shy and often cloud-bound, and you might find that Hakone National Park is the best place to appreciate it, but the peak can be climbed during July and August — the official climbing season.

Either as part of a small group or on a private tour, you spend the night at one of the ‘stations’ located along each trailhead, usually tackling the climb in the dark to watch sunrise from the peak. The route passes along a mostly barren, Martian landscape, punctuated by Shinto shrines and mountain huts. The trails can get very busy, but there’s a sense of comradery and celebration as climbers ascend.

For a close-up view of Mount Fuji without the climb, you can stay on the shore of Lake Kawaguchi. Many of the ryokan at the water’s edge look across the lake to the volcanic cone rising up from the flat grasslands beyond.

Hakone is about 60 km (37 miles) from Mount Fuji. On a clear day the volcanic peak dominates the skyline, framed by smaller, forest-covered calderas. With some of our best-rated ryokan in the region, you can expect warm hospitality, locally sourced food and the thermal waters of an onsen.

The Hakone Open-Air Museum has more than 100 sculptures placed around its carefully tended park, including one of the world’s largest collections of sculptures by Henry Moore. The Picasso Pavilion exhibits an impressive collection of Pablo Picasso’s creations, including sketches, paintings and pottery.

Using the Hakone Free Pass ticket provided by Audley, you can explore Hakone National Park by funicular train, cable car and public transport. There’s also the novelty of boarding one of four pirate ships, replicas of historical vessels complete with rigging and cannons, which sail across Lake Ashi.

It’s possible to visit Hakone year-round, but in winter it’s particularly satisfying to sit in a steaming onsen while your surroundings are dusted with snow, watching for Mount Fuji to emerge from behind a cloud — it tends to be less ‘shy’ in winter. At weekends the region is busy with Tokyo residents enjoying a break, so visit mid-week for a more peaceful stay.

Our itineraries will give you suggestions for what is possible when you travel in Hakone & Mount Fuji, and they showcase routes we know work particularly well. Treat them as inspiration, because your trip will be created uniquely by one of our specialists.

Written by our specialists from their own experiences of visiting Hakone & Mount Fuji, these guides will help you make the most of your time there. We share both our practical recommendations and the best ways to appreciate Hakone & Mount Fuji at its best.

We’ve selected a range of accommodation options for when you visit Hakone & Mount Fuji. Our choices usually come recommended for their character, facilities and service or location. Our specialists always aim to suggest properties that match your preferences.

Our specialists seek out authentic ways to get to know the places that could feature in your trip. These activities reflect some of the experiences they've most enjoyed while visiting Hakone & Mount Fuji, and which use the best local guides.