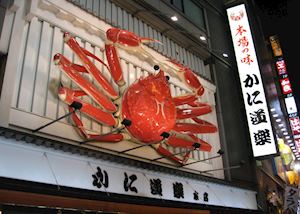 Kushikatsu, one of Osaka’s many culinary specialties, is a signature of the nearby district of Shinsekai. Pork, chicken, seafood, mushrooms or vegetables (particularly asparagus) are skewered, seasoned and deep fried then usually dipped in tonkatsu (barbecue-style) sauce. A traditional street food, you can graze on kushikatsu as you wander past pinball parlous, shooting galleries and tiny cinemas.

In the early 20th century, Shinsekai was a symbol of modern Japan. Its futuristic amusement arcades and architecture include the Tsutenkaku Tower, modeled on the Eiffel Tower (although it looks more along the lines of air traffic control).

Dominating the heart of the city is the handsomely restored Osaka Castle, which sits on a little island of green among the angular, gray cityscape. Built by Toyotomi Hideyoshi, a feudal warlord, it played a key role in the unification of Japan in the 16th century. 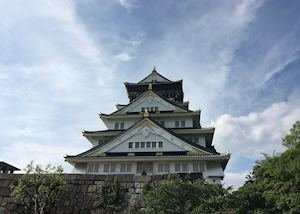 The five-story building has undergone numerous reincarnations over the centuries, the most recent — and, hopefully, permanent — in 1931 (with a major refurbishment in 1997). Head up to the top floor for views across the citadel and city beyond.

This sample itinerary will give you an idea of what is possible when you travel in Osaka, and showcases routes we know work particularly well. Treat this as inspiration, because your trip will be created uniquely by one of our specialists.

Our expert guides to exploring Osaka

Written by our specialists from their own experiences of visiting Osaka, these guides will help you make the most of your time there. We share both our practical recommendations and the best ways to appreciate Osaka at its best.