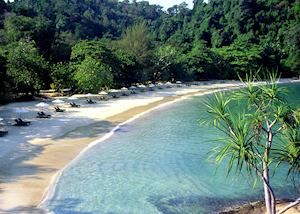 This archipelago, which is barely large enough to support the label, includes Pangkor Laut — a tiny private island that only has one hotel, the Pangkor Laut Resort. The rest of the islet is pristine rainforest, making it a good place to explore the region’s flora and fauna.

This sample itinerary will give you an idea of what is possible when you travel in Pangkor Islands, and showcases routes we know work particularly well. Treat this as inspiration, because your trip will be created uniquely by one of our specialists.

Written by our specialists from their own experiences of visiting Pangkor Islands, these guides will help you make the most of your time there. We share both our practical recommendations and the best ways to appreciate Pangkor Islands at its best.