We’re not taking new bookings for travel to Morocco at the moment. Our specialists can advise you on all the destinations you can currently book with us.

Casablanca means ‘white house’ in Spanish, named after the whitewashed Moorish buildings that scatter out from the coast, now mixed in with tower blocks and French colonial architecture.

While it’s easy, when thinking of Casablanca, to picture scenes from the 1942 movie of the same name, in reality no footage was shot there. In place of Casablanca’s on-screen alter ego, you’ll find a modern city where ambitious young Moroccans come to set up business and international restaurants provide a break from traditional tagines. 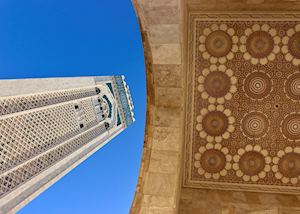 Rising above everything is the Hassan II Mosque. One of the largest mosques in the world, its minaret reaches 210 m (690 ft) into the sky.

Founded by Berbers in the 7th century, Casablanca was later settled by Arab tribes and European colonists from Portugal, Spain and France. The result is a city of varied cultures and architecture where values are slightly more liberal than in the rest of the country.

Most visitors to Casablanca stay for convenience, either before or after a flight, rather than visiting the city out of its own merit. It’s true that it doesn’t quite compare with the more characterful Moroccan cities of Marrakesh and Fez, being a city that looks to the future more than the past.

Casablanca’s port has opened it up to the world, helping the city become the economic hub of the country. The newer areas are similar to those of any other city, with international shops and restaurants, office buildings and bars. But away from this, there are things to see and do in Casablanca to enrich your stay. 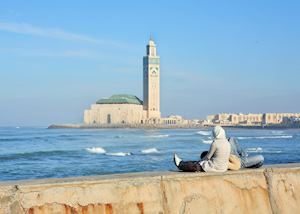 Wherever you are in the city, you can’t fail to notice the Hassan II Mosque dominating the skyline. Built between 1980 and 1993 by around 6,000 craftsmen, it stands proudly on the shoreline looking out over the Atlantic Ocean.

This is one of just two mosques in the country that’s open to non-Muslims; guided group tours of its interior run throughout the day between prayer times. Its prayer hall is truly vast, with capacity for up to 25,000 people, while a further 80,000 people can be accommodated in its courtyard.

Inside, your guide will tell you about the mosque’s construction and key features. Then you’re free to admire the mosaics, marble columns, horseshoe-shaped arches and carved and painted wooden ceilings. An unusual feature of the prayer hall is its retractable roof, which allows people to worship in the sunlight or beneath the stars.

Outside, waves roll in from the ocean and, strolling along the nearby beach, you might see surfers offshore. Another sand beach lies farther west along the coast in La Corniche, where you can also explore waterfront shops and restaurants.

In Casablanca’s southeast, the Quartier Habous or Nouvelle Medina (New Medina) is home to small souqs selling local food and handicrafts, from leather bags to brightly painted pottery and large bowls of olives. Established by the French during the 1920s, the district has a mixture of colonial and traditional Maghrebi buildings, broken up by small, tree-lined squares. While on a much smaller scale than the souqs of Marrakesh, the medina’s alleys are still atmospheric to wander. 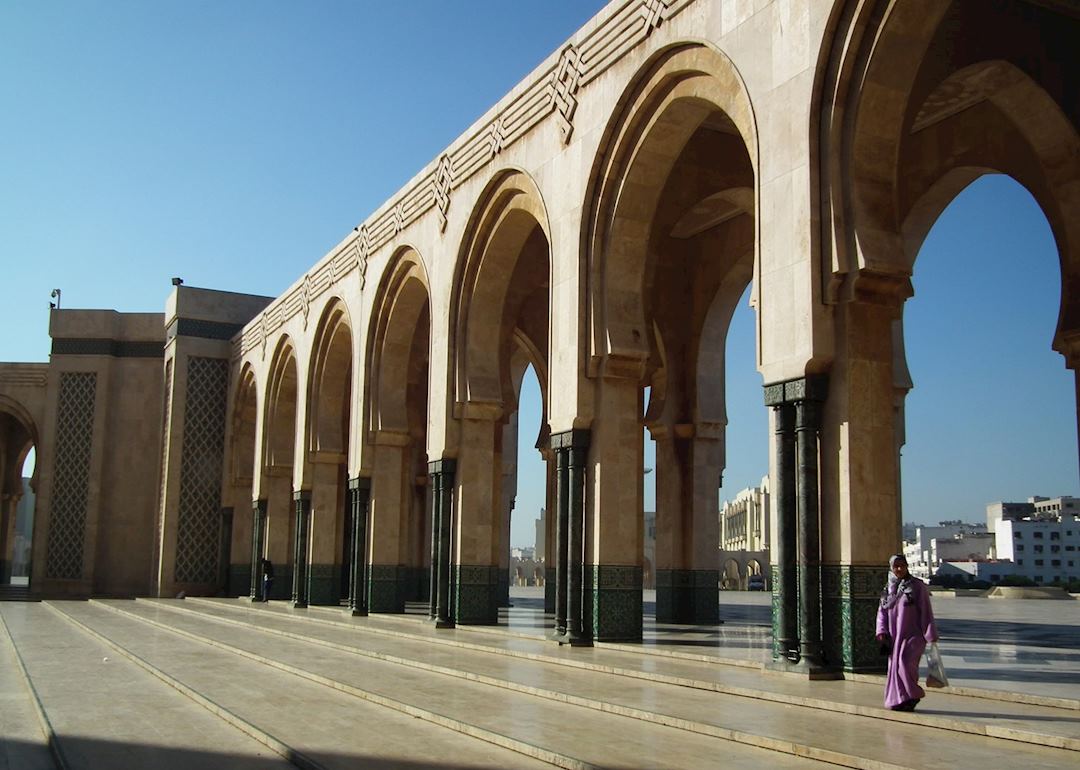 Start planning your trip to Casablanca

We’ve selected a range of accommodation options for when you visit Casablanca. Our choices usually come recommended for their character, facilities and service or location. Our specialists always aim to suggest properties that match your preferences.