Millions of years ago, a volcano the size of Mount Kilimanjaro rose from the highlands of northern Tanzania. Its eruption formed the largest unflooded caldera in the world, the Ngorongoro Crater. Now inactive and filled with wildlife, the crater is a playground where you can enjoy game drives in search of the Big Five. Our Africa specialists have been on safari here and in the wider Ngorongoro Conservation Area. Using their own experiences, they can help plan your time in and around the crater.

The natural protection of the crater’s 600 m (1,968 ft) high walls helps many species to thrive. This is the best place in Tanzania to see critically endangered black rhino. Wildebeest, zebra, eland and gazelle carpet the short grassland, watched hungrily by lion, cheetah, wild dog and hyena. And the waters of Lake Magadi are often mottled pink by flamingos.

Game drives inside the Ngorongoro Crater 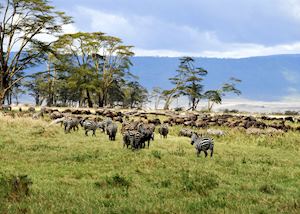 Whether you’re staying in a lodge on the crater’s rim or just visiting for the day, guided game drives give you a chance to explore the crater and its wildlife. You can opt to join a shared game drive or have a private guide who’ll tailor the drive to your interests.

You start the day from the top of the crater, where you can gaze over the rim and see the 25 km (15.5 mile) hollow in the Earth stretching before you. Evergreen forest clings to the slopes, and clouds cast rolling shadows over the grassland and pockets of acacia trees. Far below, animals move like tiny ants. As you descend, you begin to make out what they are: antelopes, buffalo, wildebeest and Grant’s and Thomson’s gazelles.

Once on the crater floor, your guide’s knowledge of the land comes into play to get you close to animals both common and, if you’re lucky, rare. Sightings of black rhino are far from guaranteed, but you’re in the best place to find them.

A drive over to Gorigor Swamp is likely to give you views of large-tusked elephant and hippo, while in Lerai Forest you might encounter baboons and leopard in the branches of yellow fever and acacia trees.

While the crater is usually busy with other safari vehicles (especially during the dry season, between July and October), staying on its rim means you can be the first into the crater and the last out, with day-trippers limited to six-hour visits. Alternatively, you could travel here outside the peak months, when it’s much quieter but there’s more chance of rain.

Ngorongoro Crater is part of the Ngorongoro Conservation Area, a UNESCO World Heritage Site that spans 8,300 sq km (3,200 sq miles) across Tanzania’s Crater Highlands. Away from the hive of activity around the crater you can take in more volcanic scenery, including two smaller craters — Olmoti and Empakai. You also have the sheer cliffs of the Great Rift Valley, and the vivid waters of Lake Natron, a salt and soda lake tinged raspberry and orange by salt-loving microorganisms.

There are lots of hiking opportunities in these untouched areas, taking you through forests, grasslands and rocky outcrops, and into volcanic craters along Maasai cattle trails. You can also spend time in Maasai communities for an authentic taste of their culture, where you can have a go at herding cattle and visit a local soko (market).

Within the Ngorongoro Conservation Area is Olduvai Gorge, one of the most significant sites for hominid fossil discoveries in the world. It was in this steep-sided gorge that the earliest known human ancestors lived just under two million years ago, and some of their petrified remains were found here during the mid-20th century. You can visit the gorge’s museum, where real fossils and casts of the early human skulls are on display.

Our itineraries will give you suggestions for what is possible when you travel in Ngorongoro Crater, and they showcase routes we know work particularly well. Treat them as inspiration, because your trip will be created uniquely by one of our specialists.

We’ve selected a range of accommodation options for when you visit Ngorongoro Crater. Our choices usually come recommended for their character, facilities and service or location. Our specialists always aim to suggest properties that match your preferences.

Our specialists seek out authentic ways to get to know the places that could feature in your trip. These activities reflect some of the experiences they've most enjoyed while visiting Ngorongoro Crater, and which use the best local guides.