Highlights from my expedition cruise to Antarctica

My journey started in the Port of Ushuaia in Patagonia — a far-flung corner of Argentina. It’s the departing point for One Ocean Expeditions’ 18-day sea adventure to the Falkland Islands, South Georgia and the Antarctic Peninsula.

I was traveling on board their ice-strengthened ship called the Akademik Ioffe, a working research vessel that’s commissioned by OOE for their cruises into polar regions. With around 80 other passengers, we had plans to hike, kayak and break our way through the remote, desolate icy paradise region in search of wildlife and chilly experiences. 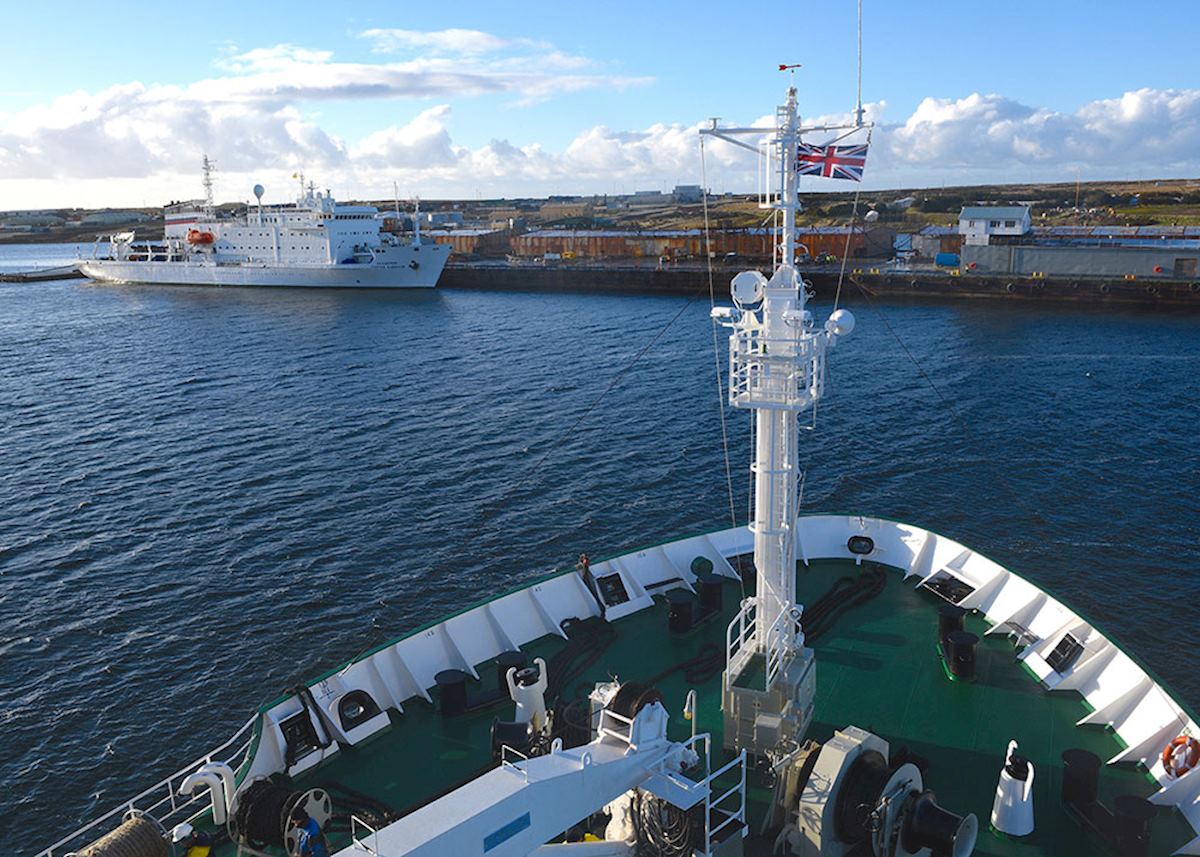 OOE specializes in small-group polar exploration. It’s not a luxury cruise, but a comfortable adventure expedition. The ship’s stability makes for a very comfortable voyage, especially in rough seas.

We pulled out of Ushuaia at around 6pm on a chilly October day. A pilot joined the crew up on the bridge to oversee our passage through the Beagle Channel. Giant petrels and South American terns followed in our wake and the Tierra del Fuego slowly slipped away.

Our first landing was at West Point Island, located off the north-west tip of West Falkland. It was originally named Albatross Island and is home to the black-browed albatross, among other birds.

We used zodiacs to get to shore — rigid inflatable boats that carry around ten passengers each. We trod carefully down the steep gangway to the zodiacs, and once on board we sped bumpily across the sea to land. 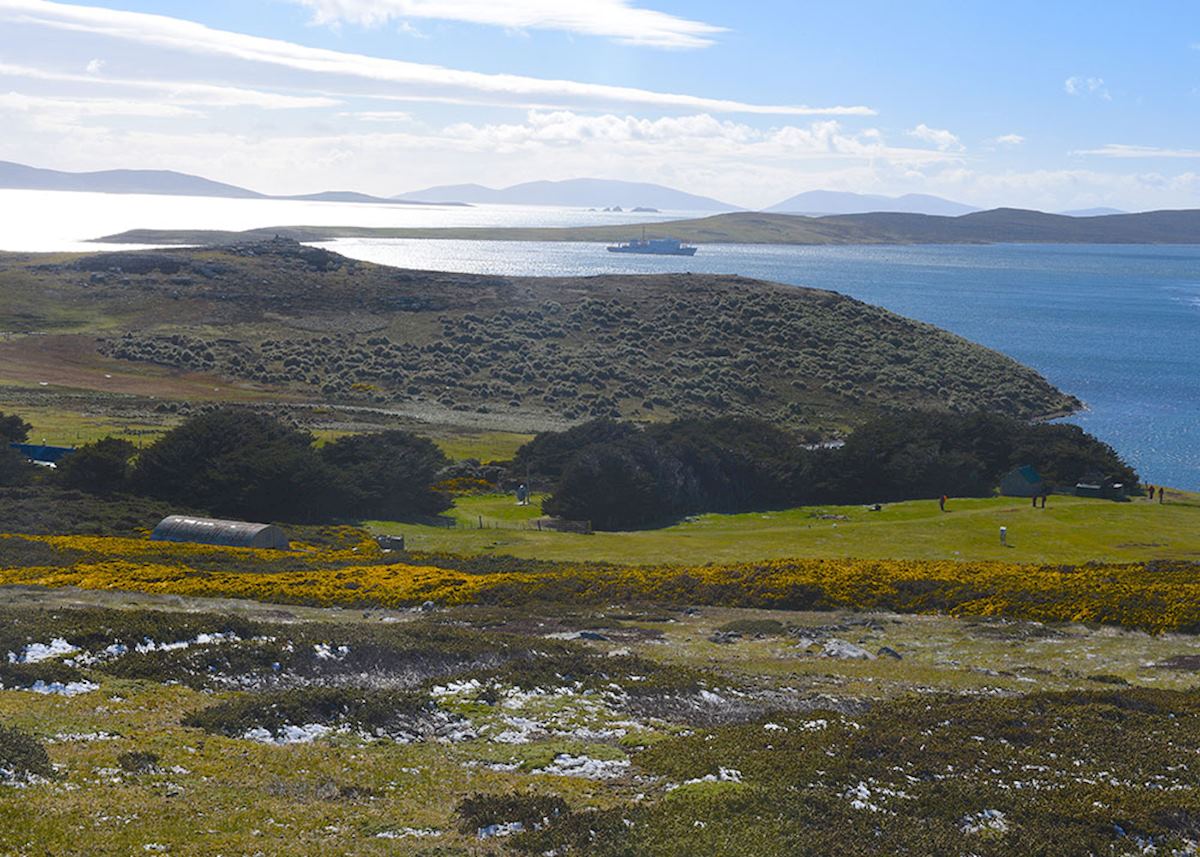 We arrived on what turned out to be a sunny morning and were greeted by local residents, who guided us across the island’s rolling hills to a large albatross colony. We scrambled through tall grass and penguin poop to observe the massive albatrosses mingle with cute rockhopper penguins and imperial cormorants. Magellanic penguins are also present in the thousands on West Point Island.

We called in at Port Stanley. There’s plenty to occupy your time in and around Stanley, whether it’s trekking along penguin-covered beaches or hanging out in the local pub.

From the Falkland Islands, it took two days on a south-westerly course to reach South Georgia. Once there, we spent three days exploring various bays for wildlife. Bad weather days brought itinerary changes that often turned out to be better experiences than the ones planned.

History enthusiasts won’t be disappointed. At Grytviken, which is the largest of the old whaling stations on South Georgia, I visited Ernest Shackleton’s grave (he was buried here in 1922) and I hiked out to the waterfall that he and his men had to navigate down in order to reach safety. 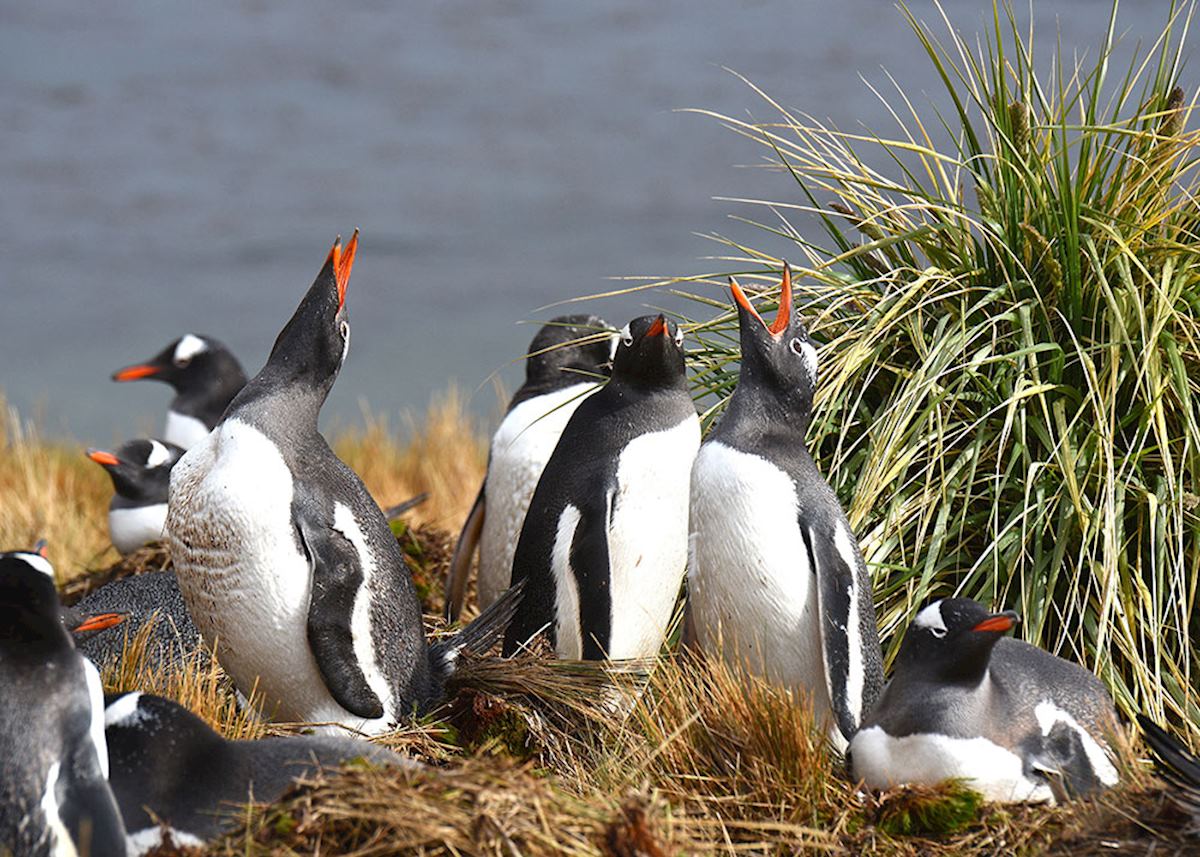 Most of our days were organized in the same way. After breakfast, guests gathered in the Mud Room, where wet-weather gear for Zodiac excursions was kept. Guests spent a few hours on land or cruising around in the Zodiacs exploring the shore or glaciers, before returning to the ship for lunch, and then venturing on an afternoon outing into the wilds. 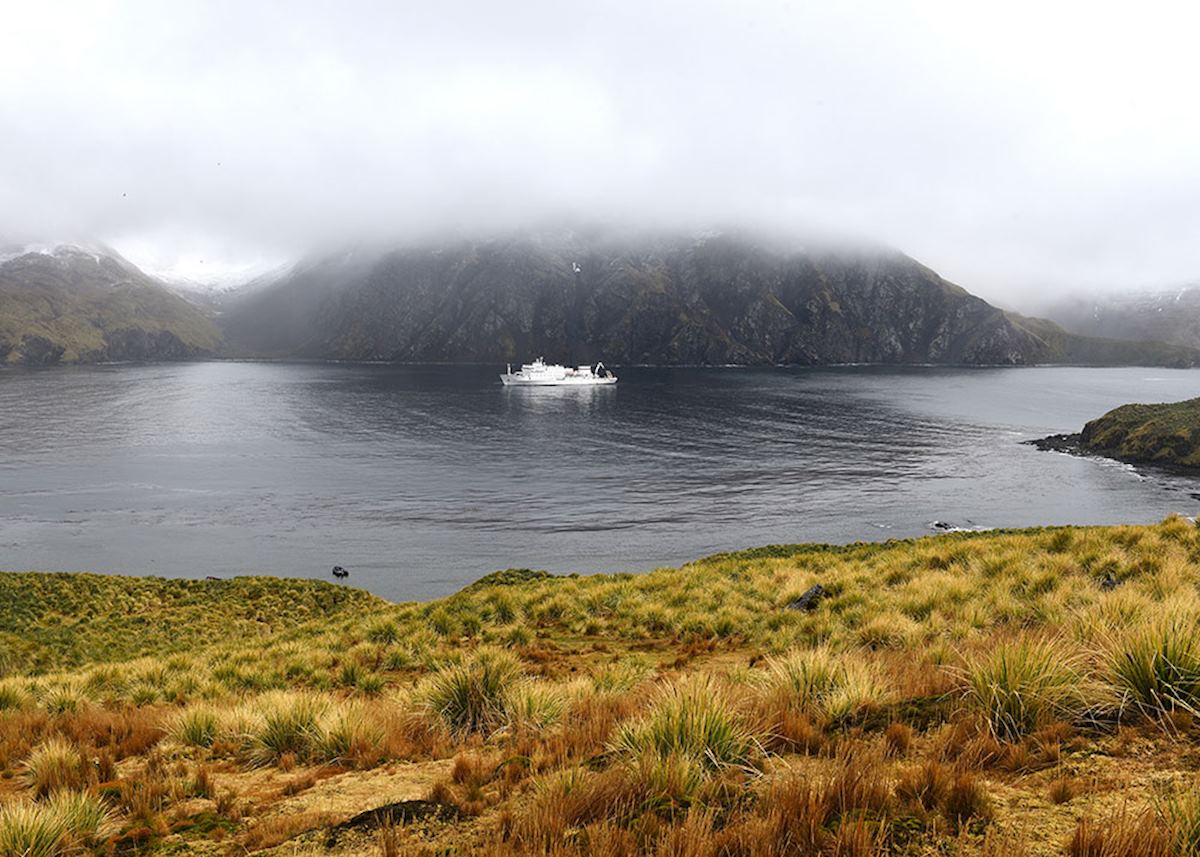 The experts on board included documentary filmmakers Neil Nightingale and Karen Bass, who have commissioned many BBC Natural History programs. Throughout the voyage they gave masterclasses and presentations about their work.

Our next port of call was the Antarctic Peninsula. Antarctica is unarguably remote and desolate at times, but it is pure and peaceful and makes you feel alive. It was pretty choppy getting there, and storms prevented us from stopping at Elephant Island, but things calmed down as we entered the Gerlache Strait to Cuverville Island. The kayaks headed out to explore the bay, which was clogged with icebergs. 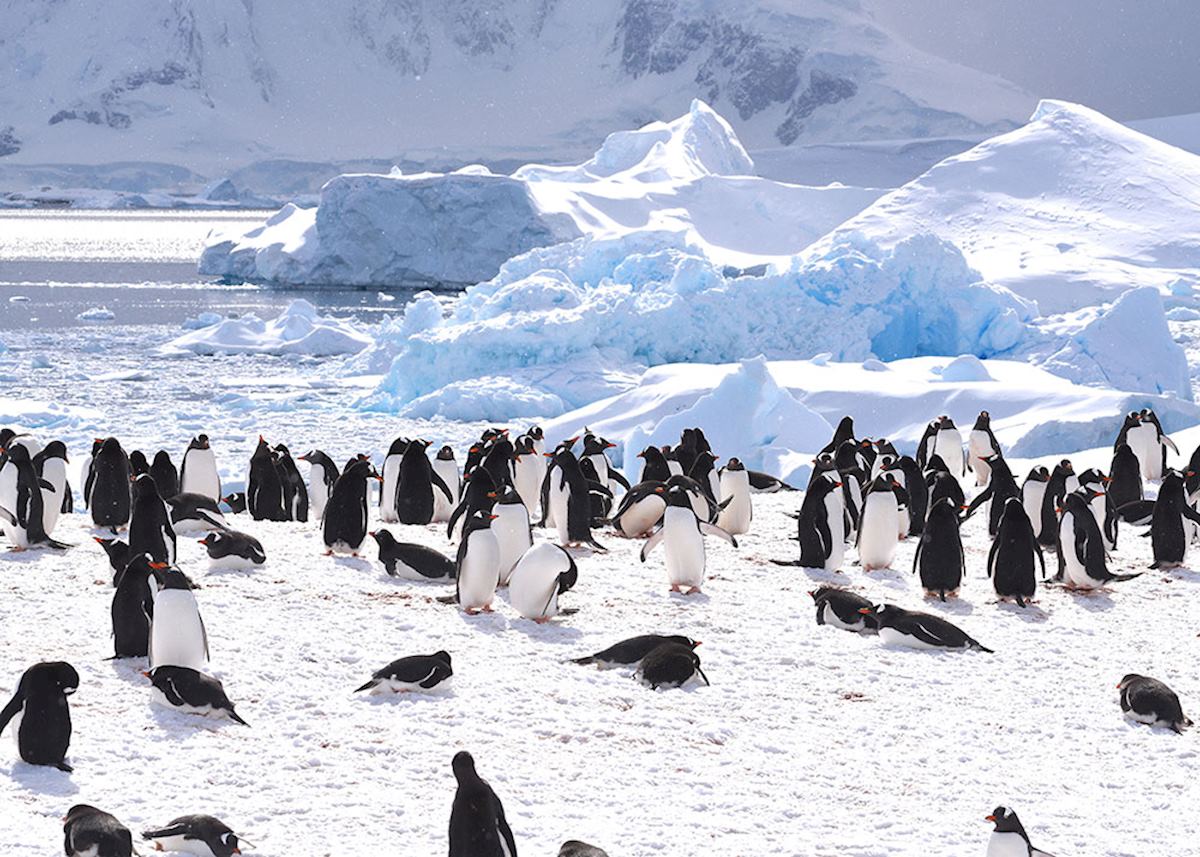 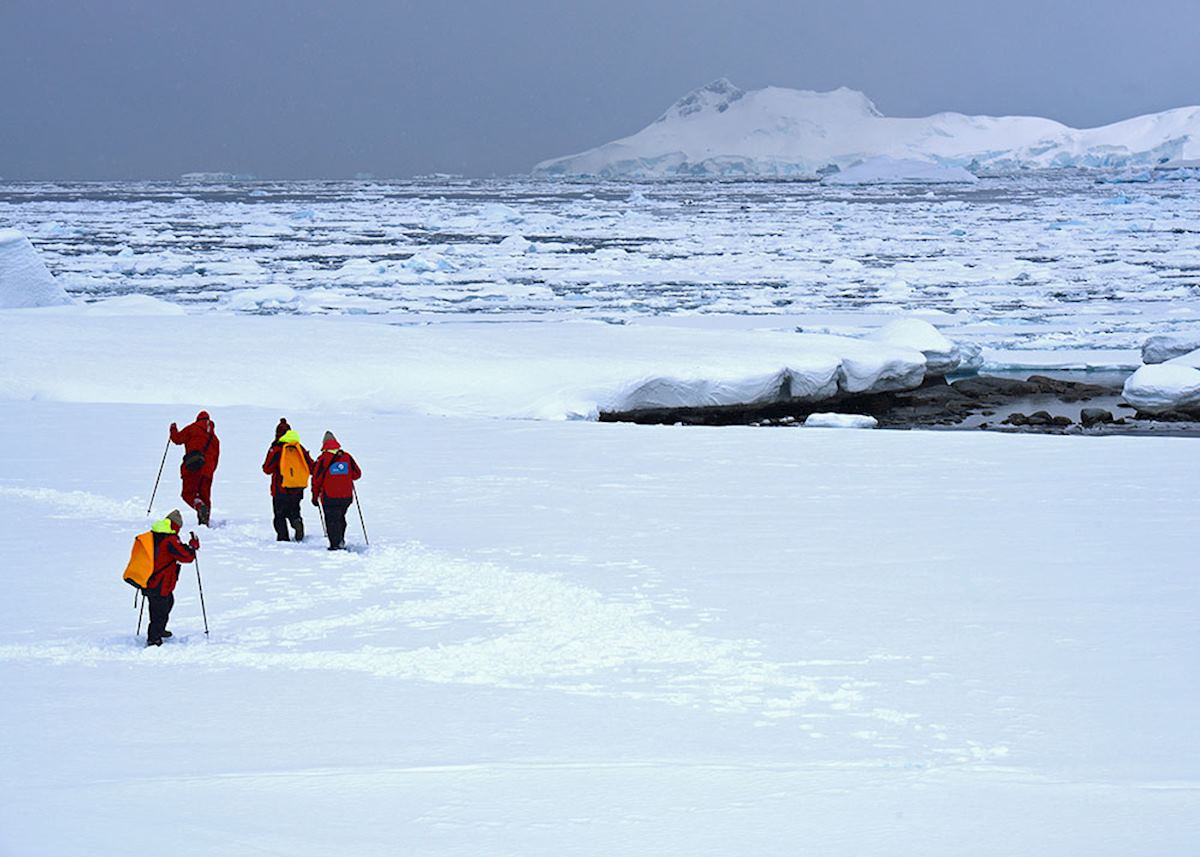 Passengers walking through the snow

Buzzing with excitement from our spectacular journey, we prepared for our return voyage across the Drake Passage and back to Ushuaia in Argentina.

The notorious Drake Passage — between the Antarctic Peninsula and Cape Horn — has a reputation for big storms. It covers 88 km (54.5 miles) and, on a good day, it takes 50 hours to cross.

However, this time the sea behaved and was so calm that we had to slow down so that we weren’t ahead of schedule.

I love the unpredictability of traveling in this region, where things can change very quickly. Everyone seems to be overawed by it, and especially by the wildlife. It must be one of the most impressive places on the planet.

Words and images by Lisa Young.

Read more about trips to Antarctica 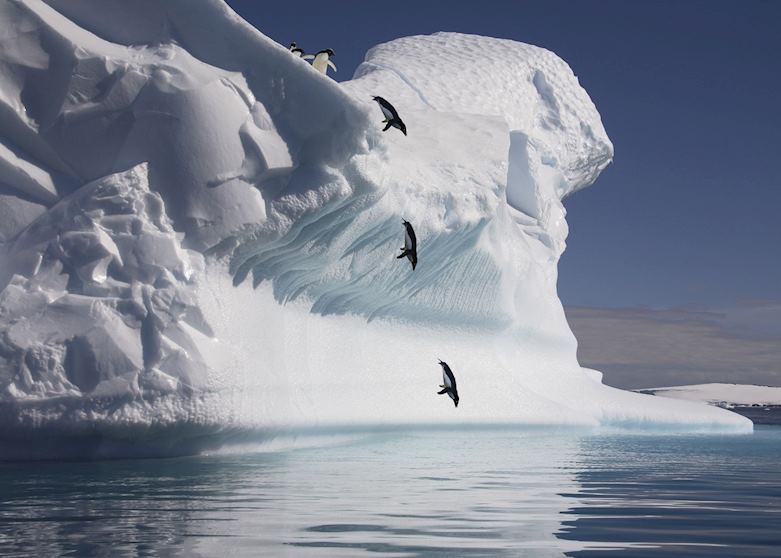 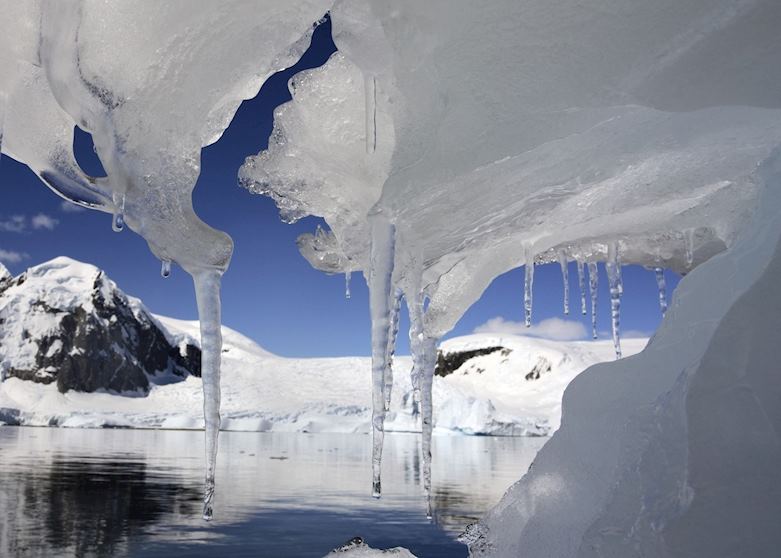 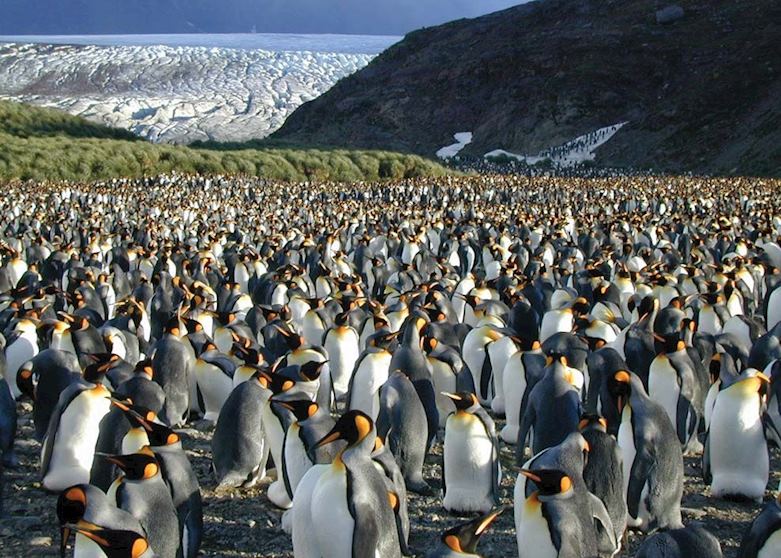