Winter is a surprisingly good time to visit Europe. Hotels and flights are less expensive, operas and orchestras begin their regular seasons and crowds dwindle to a mere trickle, even in hotspots like Venice or Paris.

What’s more, festivals and holidays dot the calendar during the colder months, and you can celebrate Hogmanay or Burns Nights in Scotland or Entrudo in Portugal. And, each country has its own way of celebrating Christmas, including the live Nativity scenes in Naples and special markets across the continent. 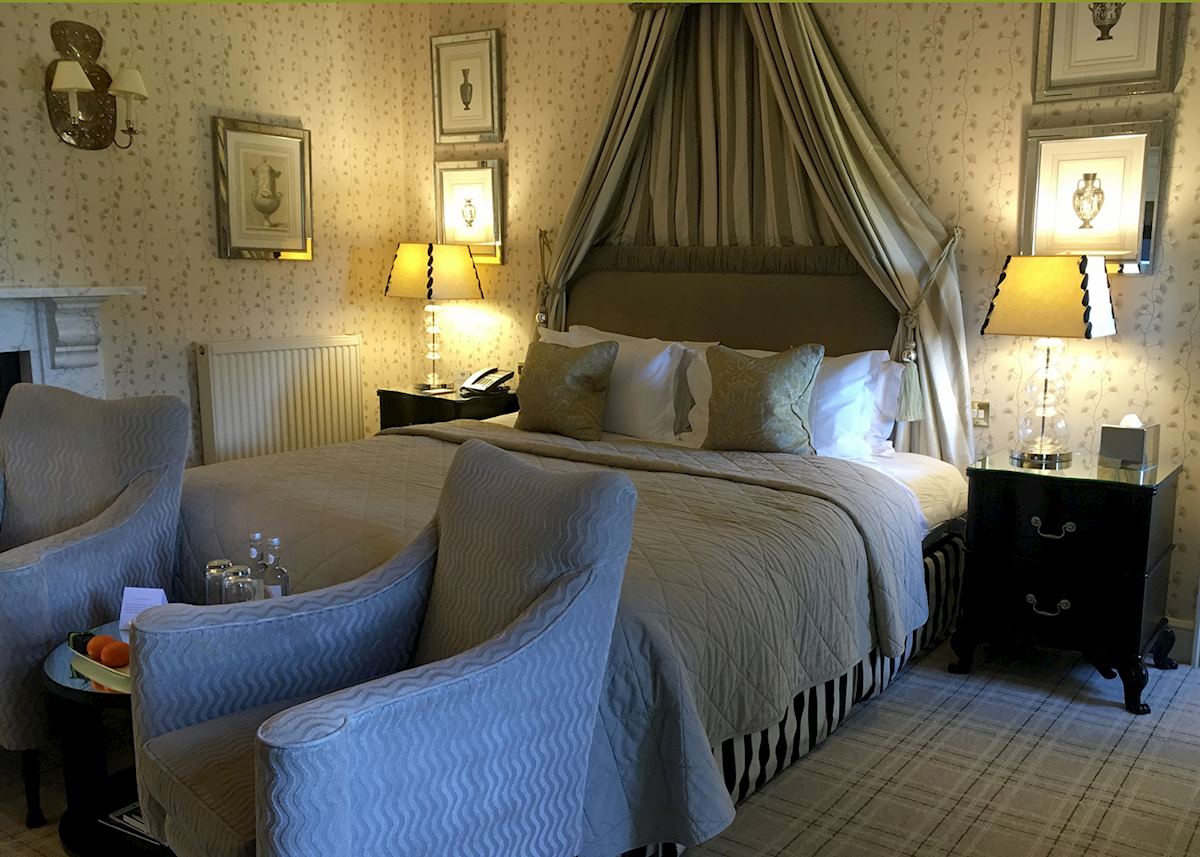 ‘The good old city’ of London is practically another character in Dickens’ A Christmas Carol, and there’s something special about spending the holiday here.

Whether you celebrate or not, you can embrace the season with ice skating outside the British Museum and Somerset House, shopping at Harrods or simply munching on roasted chestnuts as you stroll along South Bank. You can also choose to visit one of the many carol services held at St Paul’s Cathedral and admire the tree in Trafalgar Square and the period displays at Kensington Palace.

You’ll find Christmas markets, selling gifts and ornaments, throughout London and across the country, from the ancient city of Bath to the towns that dot the Cotswolds. Also in the Cotswolds, Blenheim Palace puts on a dazzling lights display, turning the great house and gardens into a twinkling fairyland.

The Slaughters Manor House is just a half-hour drive away, and the hotel’s elegant rooms and generous fireplaces make it a snug retreat at the holidays. Between Christmas Eve and Boxing Day, the kitchen runs a series of special events, including a cream tea with mulled wine, a five-course feast and a Champagne toast with carols.

This 12-day tour of England includes time in London as well as the Cotswolds and the Lake District.

First-foot and poetry about haggis in Edinburgh 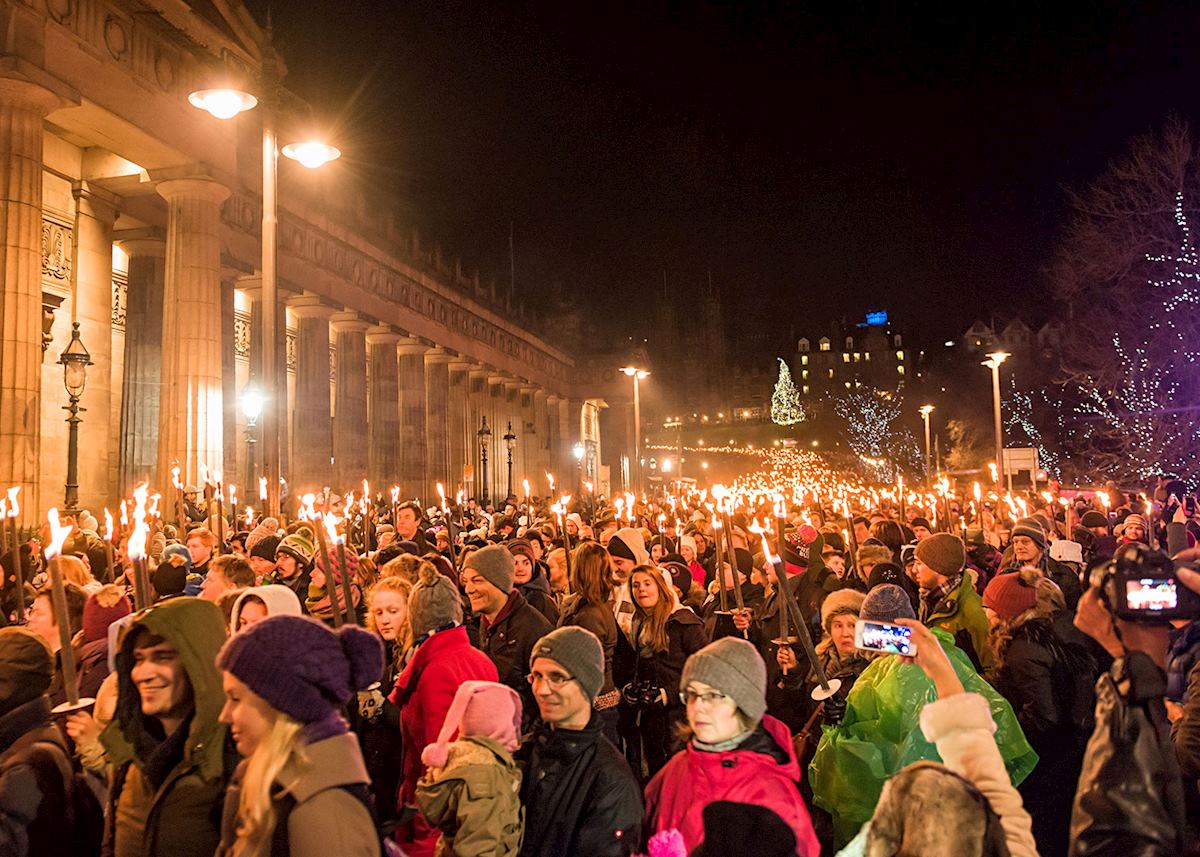 Hogmanay, Scotland’s own brand of New Year’s Eve frivolity, is widely celebrated across the country. Edinburgh’s celebrations include a street party, a torchlight parade, concerts and a ceilidh (traditional dancing, folk music and storytelling).

The first day of the New Year also has a lot of traditions associated with it. Friends go from house to house visiting each other and it’s considered good luck if the first-foot (the first person to step foot in the house) is dark-haired. The particulars of the tradition vary — some say it should be an attractive woman and others believe it should be a tall man — but everyone agrees that a first-foot should come bearing gifts, especially whisky.

Many of the area’s hotels and restaurants hold special festivities for Hogmanay. You can attend a late-night feast at Gleneagles in Perthshire, toast the New Year with Champagne at a gala at Fonab Castle or compete in Highland Games for the family at Kingsmill Hotel in Inverness.

On the 25th of January, Scotland marks the passing of its national poet, Robert Burns, with special Burns Night feasts. The spectacle of the evening includes a piper playing in a platter of haggis as the kilt-clad host reads Burns’ poem, Address to a Haggis.

The ‘chieftain o' the pudding-race’ is toasted with whisky and eaten with neeps and tatties (turnips and potatoes). After the meal, guests enjoy many more drams of whisky and funny speeches before a rousing rendition of Burns’ Auld Lang Syne.

If you’d like to attend a Burns Nights, many hotels welcome guests, especially in the capital. There, you can enjoy a three-course meal at the Prestonfield hotel, hosted by Scottish celebrities, or an elegant supper on board the Royal Yacht Britannia.

Starting in London, this royalty-themed tour of Edinburgh includes several castles and palaces.

A lordly stay at an Irish castle 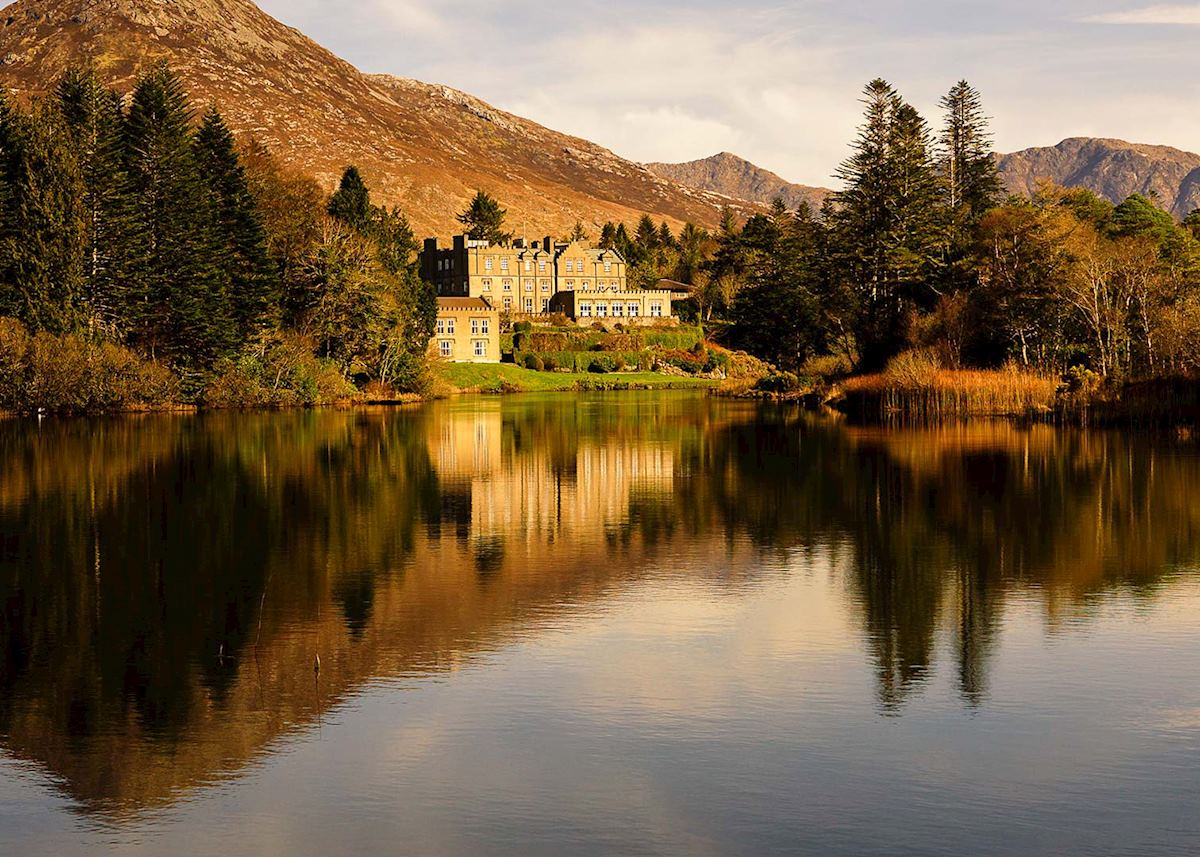 With sprawling grounds, gourmet restaurants and attentive staff, Irish castle hotels offer the chance to live like a lord… albeit for a princely price. But, rooms are less expensive in the winter, which means you can stay for longer.

Nestled in the wild western reaches of Connemara, Ballynahinch Castle sits on the banks of the River Owenmore. The graciously appointed rooms all face either dense forest or the Twelve Bens Mountains, a particularly pretty sight when the trees are spangled with frost and the mountains capped with snow.

The castle’s sheltered woodlands are laced with walking trails, from easy strolls to challenging hikes along the river or up into the mountains. You can take a walk led by the hotel’s guide, and hear a little about the area’s history or ecology as you go.

Dromoland Castle, a couple of hours to the south, invites you with an even wider range of activities. You could try your hand at archery, falconry or horse riding, or stroll through the estate’s grounds and see the walled garden, the centuries-old yew gallery or the hilltop Temple of Mercury.

Discover castle hotels in both Ireland and Scotland on this indulgent 11-day itinerary. 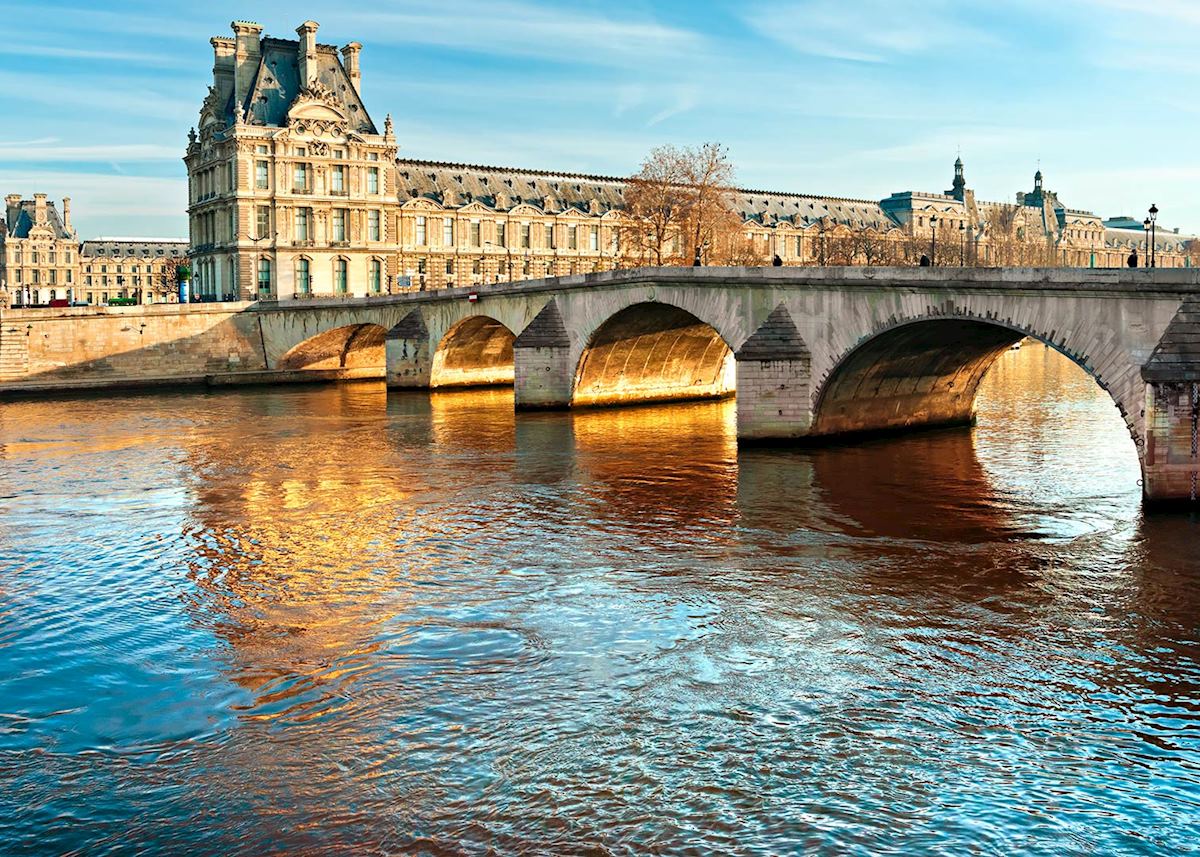 The Louvre and Seine

Ella Fitzgerald may sing about April in Paris, but winter here has its own charms. The streets empty out, giving you a better appreciation of Haussmann’s architecture. Even without their bright flowers, the formal gardens retain a sculptural beauty, with their symmetrical beds and vast rows of bare-limbed, square-trimmed trees.

The weather tends toward chilly and grey, but daytime temperatures generally hover above freezing point and snow is infrequent. You can still enjoy a stroll along the Seine as long as you dress warmly.

Also, so many of the city’s pleasures are indoors. You might sip chocolat chaud at Angelina, take in a performance at the Paris Opera, or linger over Monet’s Water Lilies at the Musée de l'Orangerie.

Best of all, without the summertime crush, wait times are dramatically shorter, even at the most popular venues like the Eiffel Tower and the Louvre. In the latter, you can ponder the Winged Victory of Samothrace or Venus de Milo without being jostled by a crowd. You might even have enough time to visit the tower twice — once in the daylight and again at sunset, to watch the city’s lights spring to life.

Explore Paris in depth on this week-long classic itinerary.

The sacred and profane in Italy 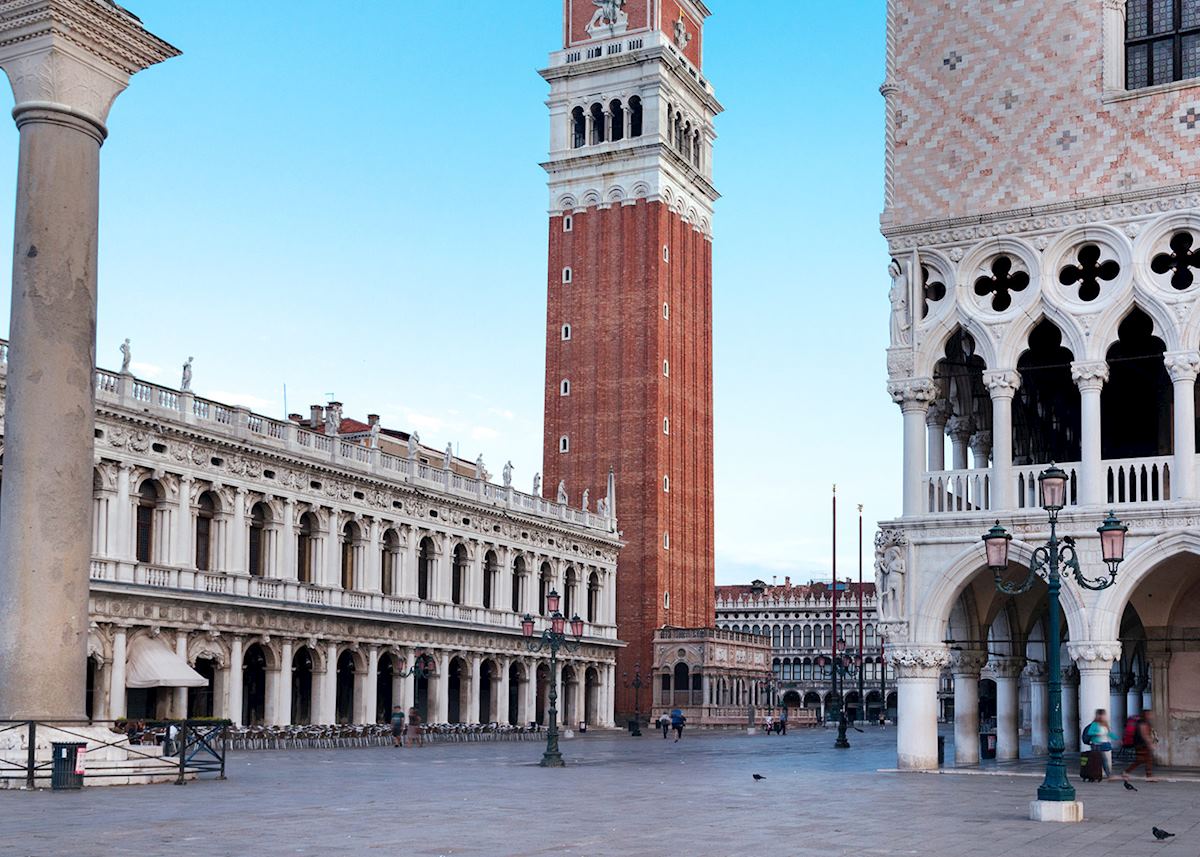 The summertime throngs are so thick in Venice that the city is considering a cap on visitors. But, a cold wind off the Grand Canal blows away the crowds, and you can enjoy St Mark’s Square and Basilica in relative quiet. Do be aware — if that same wind comes in from North Africa, it can bring flooding. In this case, you can do as the Venetians and forge ahead wearing waterproof boots, regardless.

If you celebrate, Christmas is a lovely time to visit Italy. You can attend the Christmas Eve outdoor midnight mass at St Peter’s Square (or, if you’re willing to plan well ahead, inside at the Vatican). But, we also suggest visiting Naples for its presepe vivente. These living nativity scenes are a point of community pride across southern Italy, thought to date back to 1223 when Saint Francis of Assisi supposedly constructed one in the town of Greccio. You can also find many in Sorrento.

Also in Naples, you can find some unusual nativity sets on Via San Gregorio Armeno. There, artisans sculpt the traditional characters with a comic twist — their faces are often caricatures of modern public figures, from football stars to disgraced politicians.

This classic tour of Italy includes time in both Naples and Venice, and also covers Florence and Rome. 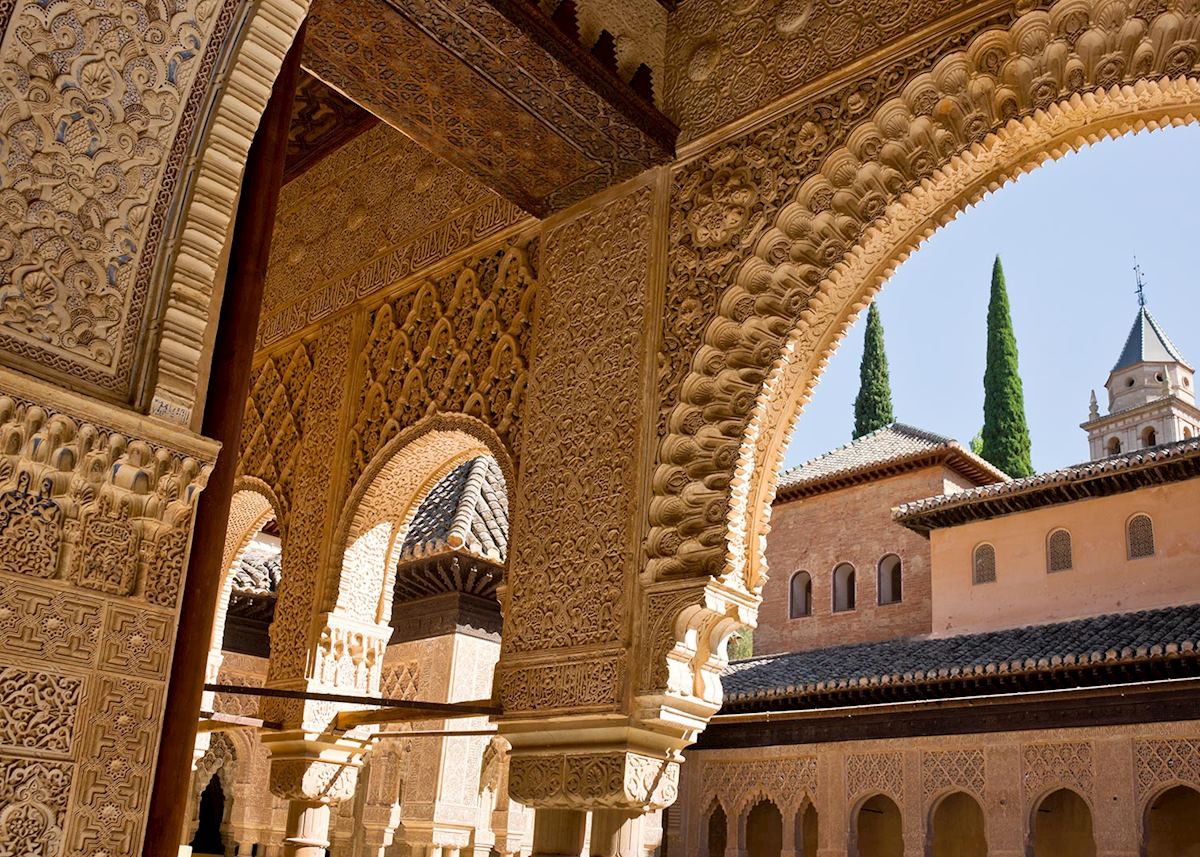 Spain’s Andalusia is closer to the Equator than some parts of North Africa, which means, in the winter, it’s warmer than the rest of Europe. And the area enjoys almost perpetually blue skies, with 320 sunny days each year. This makes it a lovely time to visit, especially if you don’t mind wearing a sweater.

In Seville, daytime highs reach about 18 C (65 F) between December and March, and don’t drop below freezing even at night.

As in Paris, the main attractions are much less crowded. This can be a particular blessing at showstopper sights like Granada’s Alhambra and Córdoba’s Mezquita. Do be aware that the Alhambra’s interior can be very chilly, and bring an extra layer — the marble designed to keep it cool in the summer does the same in the winter.

If you’re visiting Seville in early January, you’ll get to see the spectacle of Día de Los Reyes Magos, or Three Kings Day. The city welcomes the magi on 5th January with a lengthy parade, and you’ll see families holding out upside-down umbrellas to catch the candy the kings fling from their floats. That night, children put out their shoes and, on the morning of the 6th, spring from bed to find the presents the wise men left for them.

Start in Morocco for this 10-day tour, which includes spending several days in both Seville and Granada.

Floats, feathers and fado at Entrudo in Lisbon 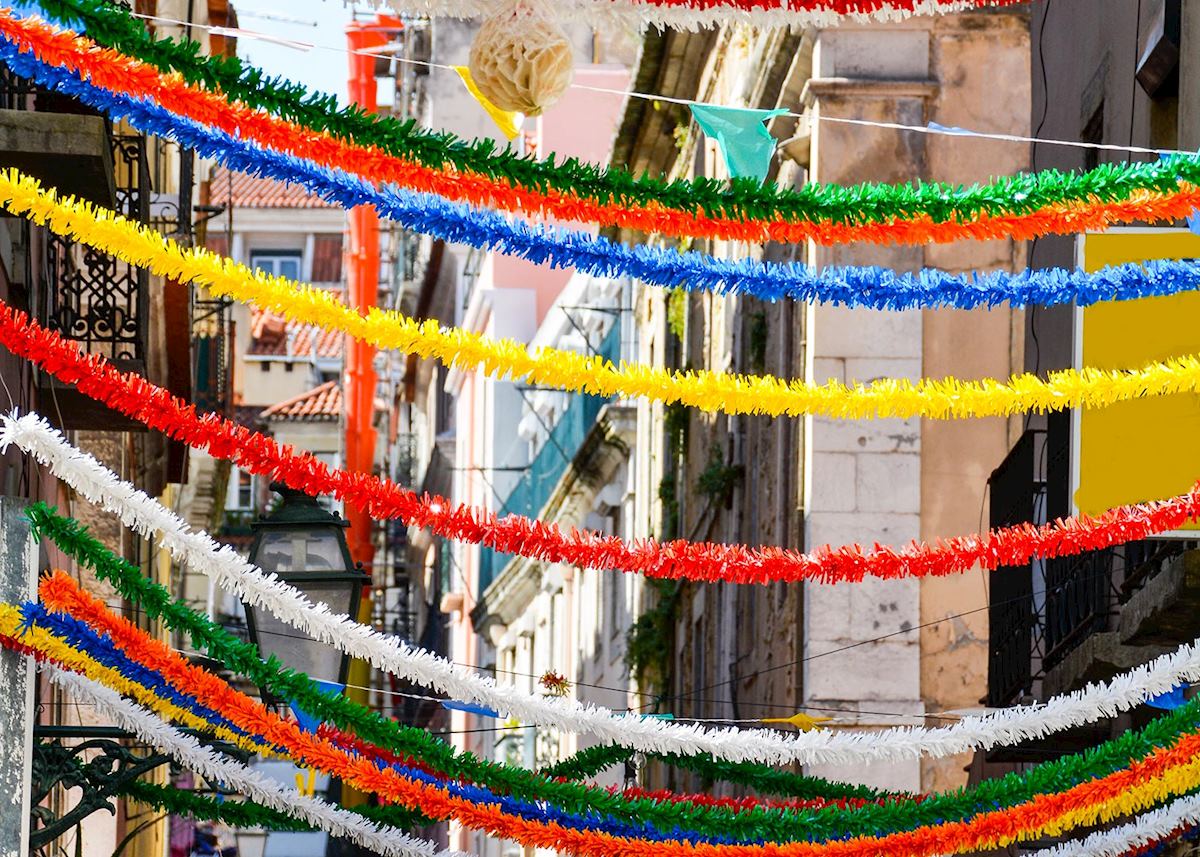 Whether you spell it Carnival, Carnivale or Carnaval (or even Mardi Gras), the hedonistic festival that happens right before Lent is a major milestone that marks the end of European winter calendars.

The bacchanal in Venice tends to get all the attention, but we prefer the party in Lisbon, which is much more low-key and less crowded, but still lively.

Called Entrudo (literally the ‘entrance’ to Lent), this is the celebration that originally inspired the blowout in Rio, which has in turn influenced the festivities here.

The festival has many traditional elements, including a parade with satirical floats and caretos, and mischief-making locals who wear costumes composed of eerie wooden masks and full-body suits that are striped with yellow, green and red fringe.

But, you can also see the Brazilian influence, especially when the samba dancers shake their tail feathers in tiny costumes that seem composed of elaborate plumage and just a scandalous handful of sequins.

Spend a week exploring both Lisbon and Portugal with this 7-day itinerary.