All three of these wetlands offer some of the best wildlife viewing in the world — but which of these South American wonders will you choose?

The Brazilian Pantanal covers  some 130,000 km (80,778 miles), extending into Paraguay and Bolivia. The vast array of wildlife here live in the variety of rivers, forest and savannah. Most of the area floods for long periods, making it the largest tropical wetlands in the world.  The opportunities for wildlife viewing are as close to ‘guaranteed’ as you can get.

Argentina’s lesser-known Iberá Wetlands is less than 10% of the Pantanal’s size.  However, that’s still 12,000 km (7,456 miles): an expansive and rewarding area to explore. The wildlife opportunities are there, while the region’s lack of worldwide fame brings its own advantages.

The Los Llanos wetlands in Colombia aren't well-visited, which adds to their appeal. The guides tend to be local ranchers, the birdwatching is excellent and you can explore the grassland plains on horseback, by mountain bike or on foot. 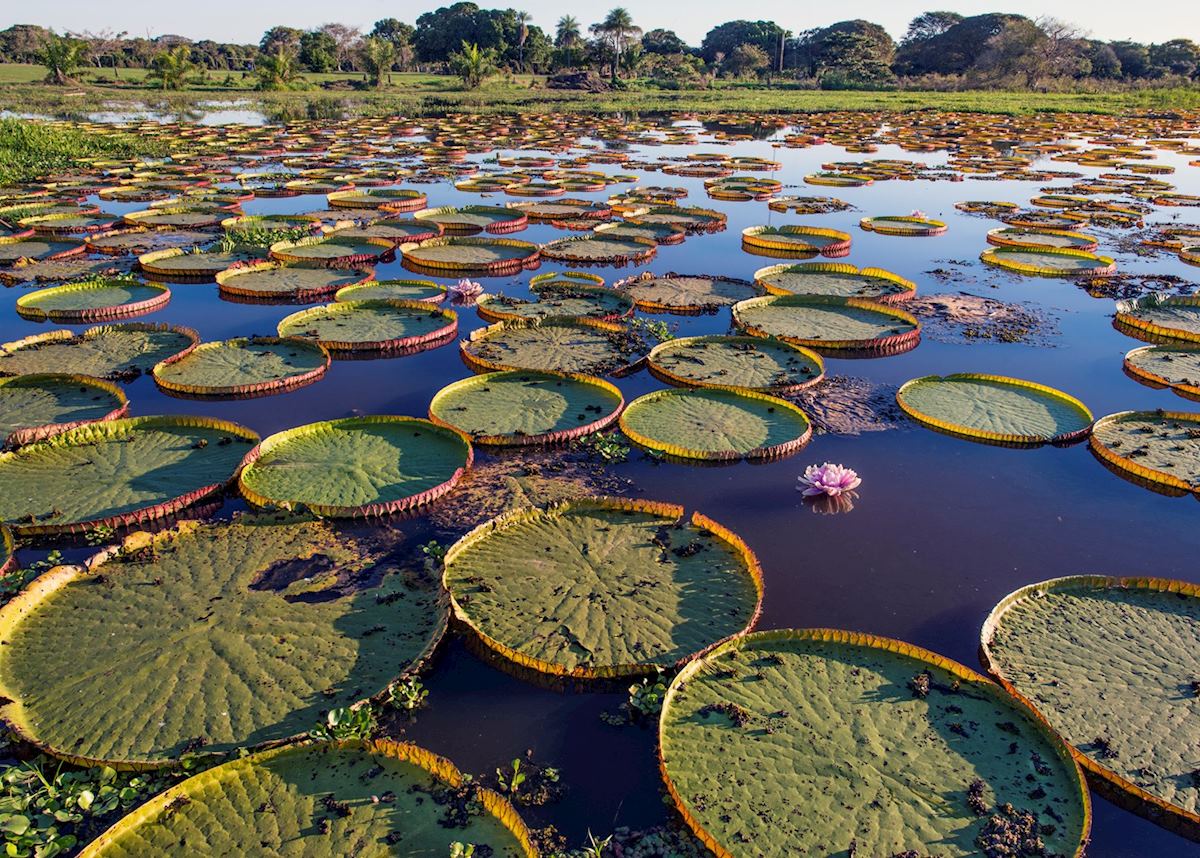 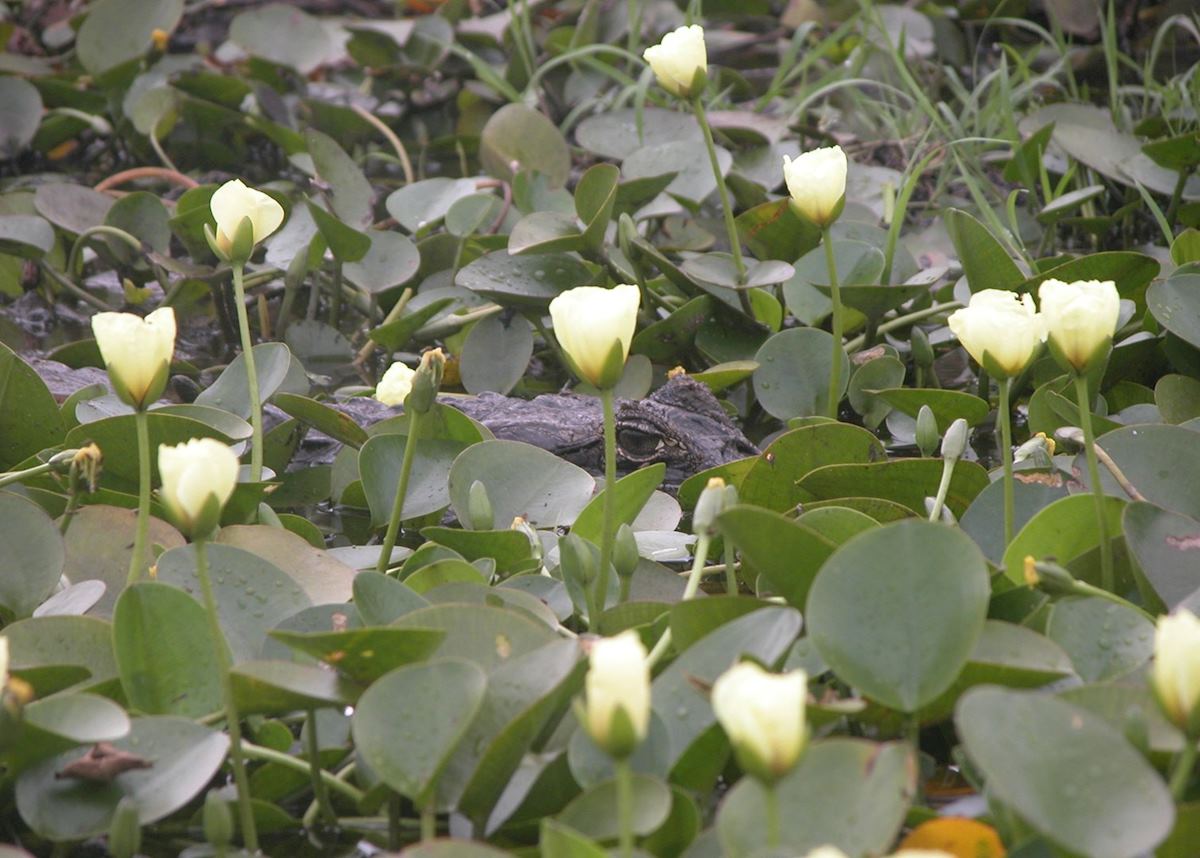 Caiman lurking in the Iberá Wetlands

The Pantanal by Anna

The Brazilian Pantanal. The name alone evokes images of toucans, parrots, caimans, tapirs, capybaras, monkeys, anteaters, anacondas and jaguars in the flooded plains of southern Brazil. But with such a massive area, where do you start?

Roughly speaking, the region splits into two with entry points in the north at Cuiaba and the south at Campo Grande. These two gateways allow you to access lodges which can be within 30 minutes or up to five hours from the airport. You may need to travel farther depending on the type of lodge or wildlife experience you’re looking for.

My most memorable Pantanal experience can be found at Araras Lodge, around two hours by road from Cuiaba. This rustic property, with its pool and hammocks, is comfortable and has that remote feeling. Not long after I arrived, I found myself in a canoe paddling through water lilies with regular sightings of caiman, stork and capybara, and monkeys scrambling through the trees at the water’s edge. 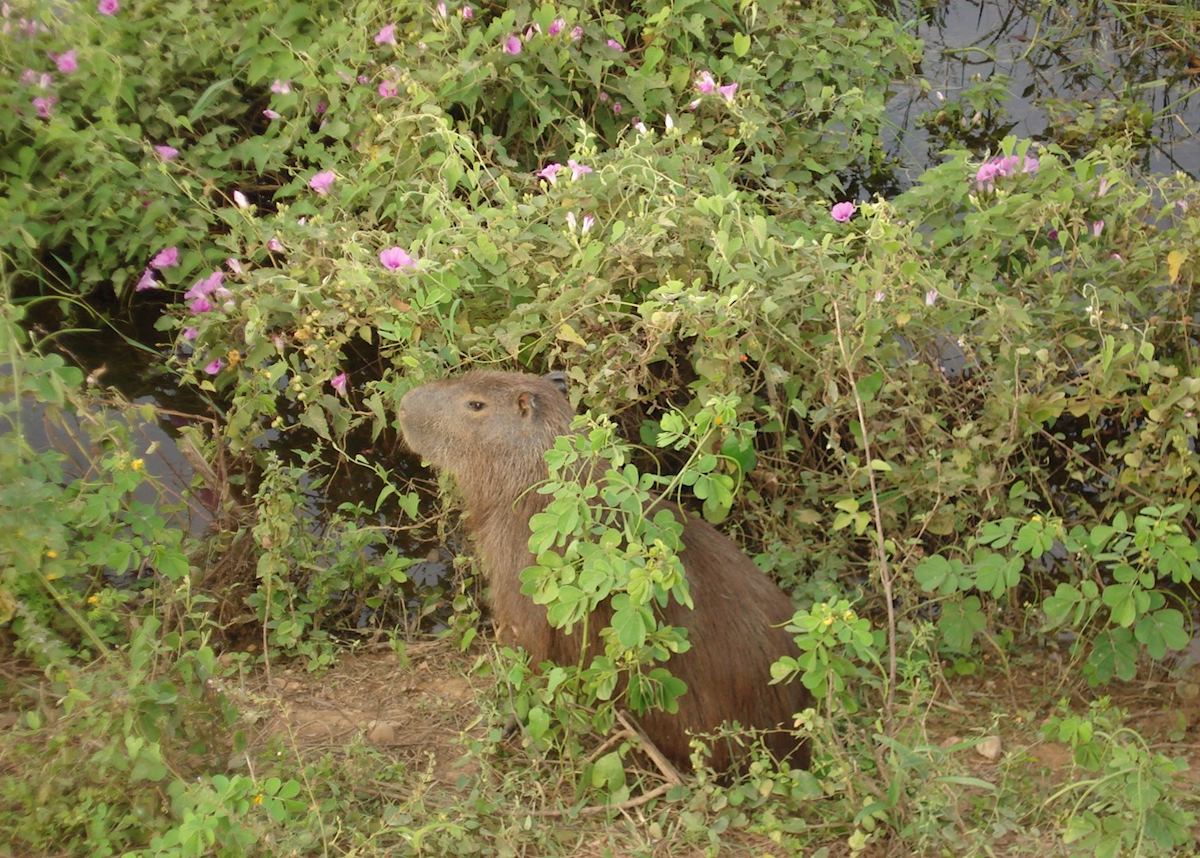 Capybara in the Pantanal 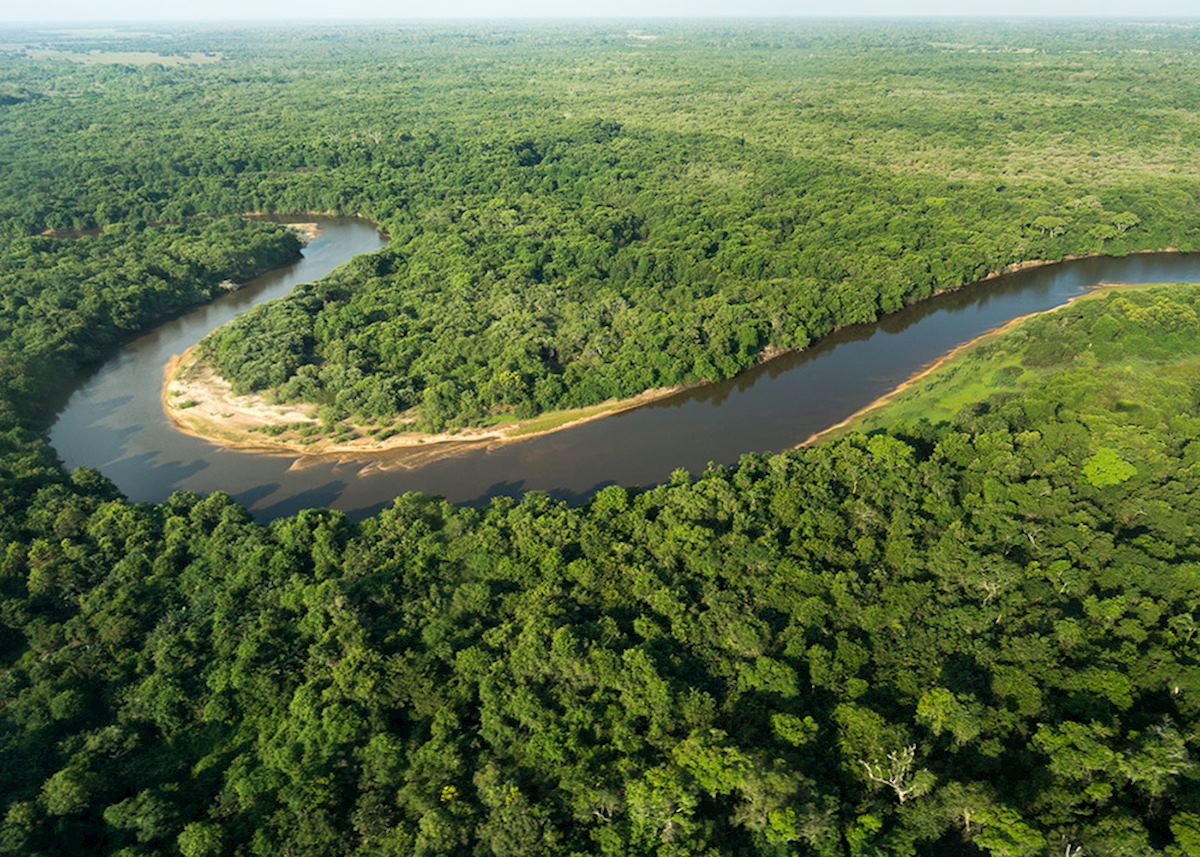 I was up early the next day and set out on horseback. Riding allows you to cover more distance and that means more wildlife (you can also go by 4x4 if you prefer). This was one of the best birdwatching days of my life: I saw everything from large rheas and jabiru storks to tiny red-crested cardinals. But it was the hyacinth macaws that made my day. I spotted several pairs of these intelligent birds searching for nuts and ripe fruits.

That evening, I enjoyed a cold drink on the deck at the lodge and, as the sun set in golds and oranges across the water, my mind turned to the wildlife we hadn’t seen. Jaguar sightings are rare here, so I wasn’t expecting those, but I did think that a giant anteater would have rounded things off nicely. I’d love to say that I was looking in the right direction when one was spotted the following morning… but all I saw was a tail vanishing into the undergrowth!

I feel that it’s only fair to point out that none of Audley’s Brazil team can agree on the best part of the Pantanal. My colleague Fiona, for example, prefers the southern Pantanal, which, due to its cattle farms, has more of an estancia-type feel with many private reserves. These do have some advantages: lodges such as the Caiman Ecolodge operate vital conservation projects including a jaguar habituation programme, meaning that big cat sightings are far more common. But one thing is for sure: wherever you choose to go in the Pantanal, you’ll be in one of the most biodiverse environments in the world. 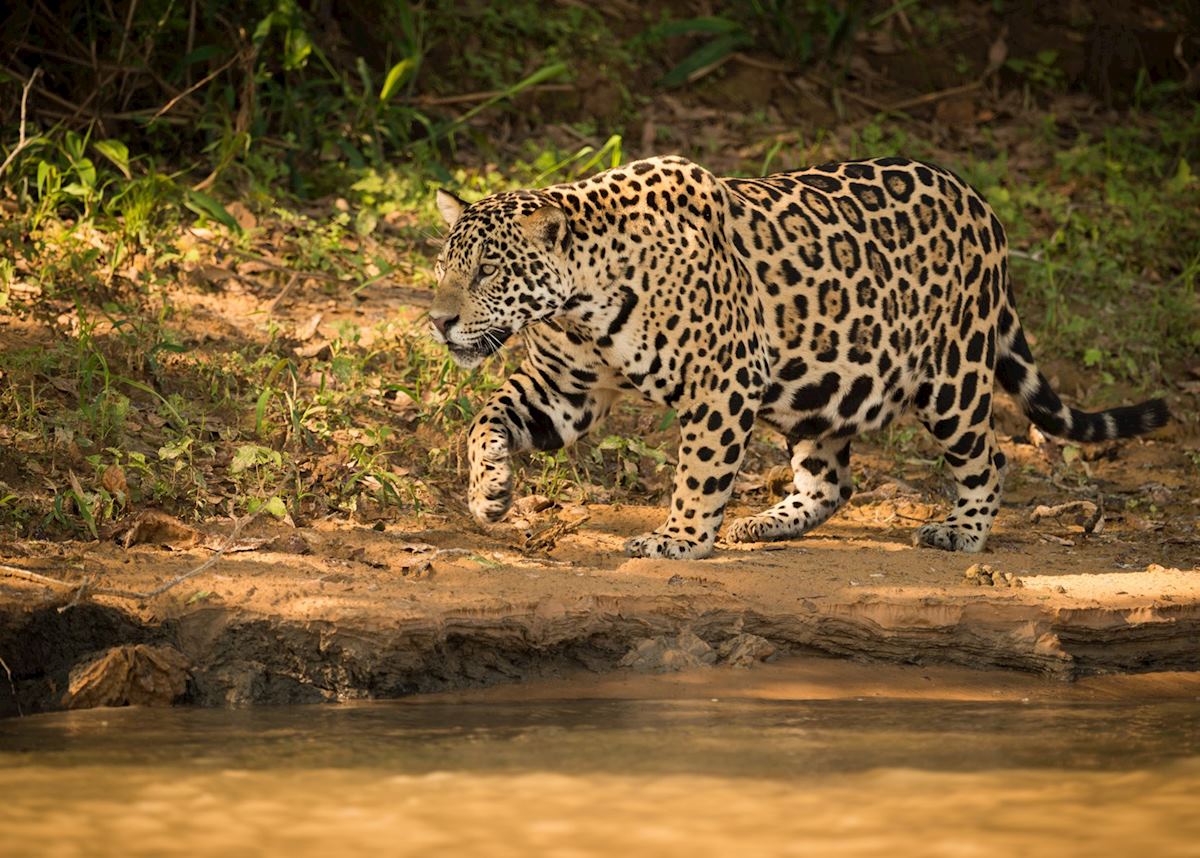 Jaguar in the Brazilian Pantanal 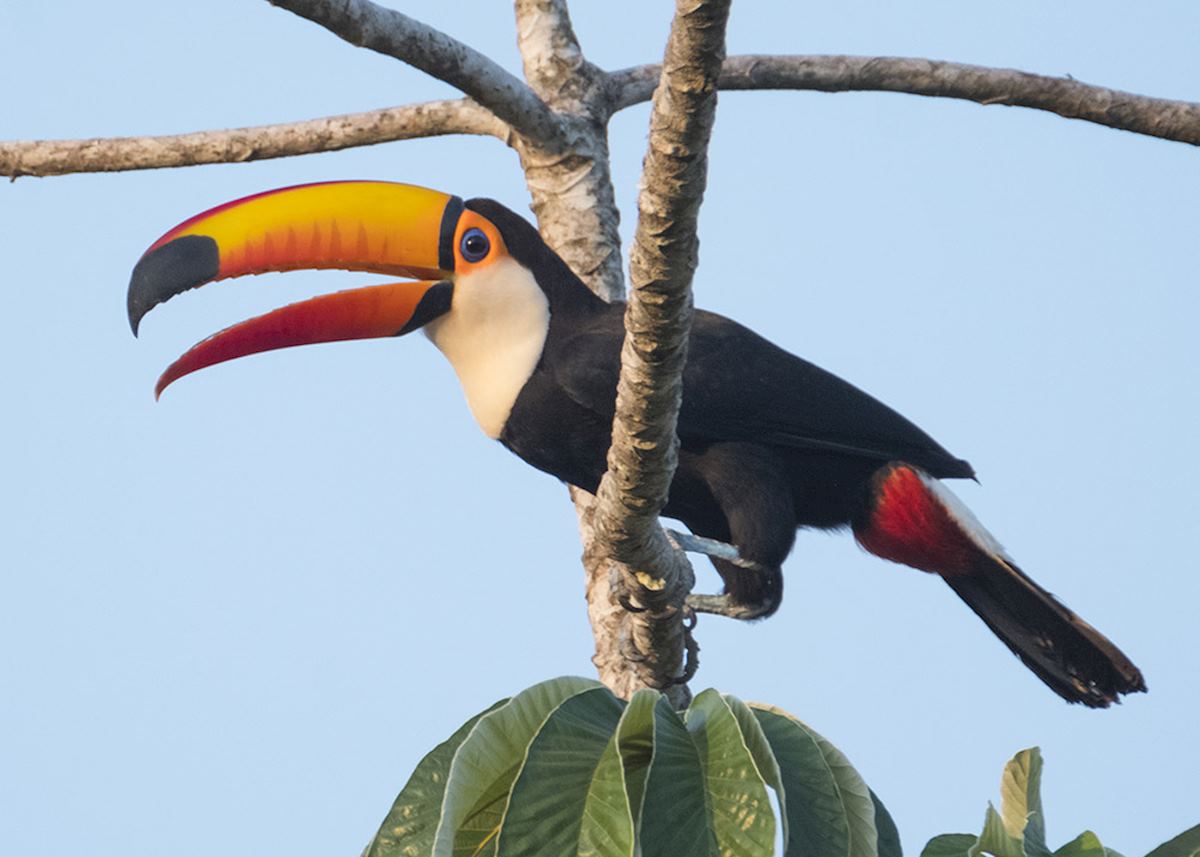 The Iberá Wetlands by Melissa

If you’ve never heard of the Iberá Wetlands before, you’re not alone. Truth be told, I’d been to Argentina twice before I really appreciated the opportunity they presented. You’ll find them south of the Paraguayan border and, after you visit, you may start to wonder why not many people seem to know about them. For a start, these wetlands are home to around 30% of Argentina’s biodiversity: that equates to some 4,000 species, including toucans, jabiru storks, caimans, peccaries, jaguars and even maned wolves.

While I’d done my research for my first visit to the wetlands, nothing could really prepare me for being raucously greeted by a family of howler monkeys who had taken up residence in a tree outside my room. Not a bad start to the trip. Putting the wildlife to one side for a moment, one of the real joys of the wetlands is its accessibility.

I stayed at the impeccable Estancia Puerto Valle and could not have been made to feel more comfortable. Getting there was a breeze, too: within an hour of disembarking my one-and-a-half-hour flight from Buenos Aires to Posadas, I’d checked in and was enjoying a cold glass of wine on the banks of the Parana River.

The next day I met all the guides who would take me out on a nearby lagoon, kayaking on a river, trekking in search of monkeys, and horse riding. The days were busy but, despite the scrumptious food at the lodge and the wild sunsets, I never wanted them to end. 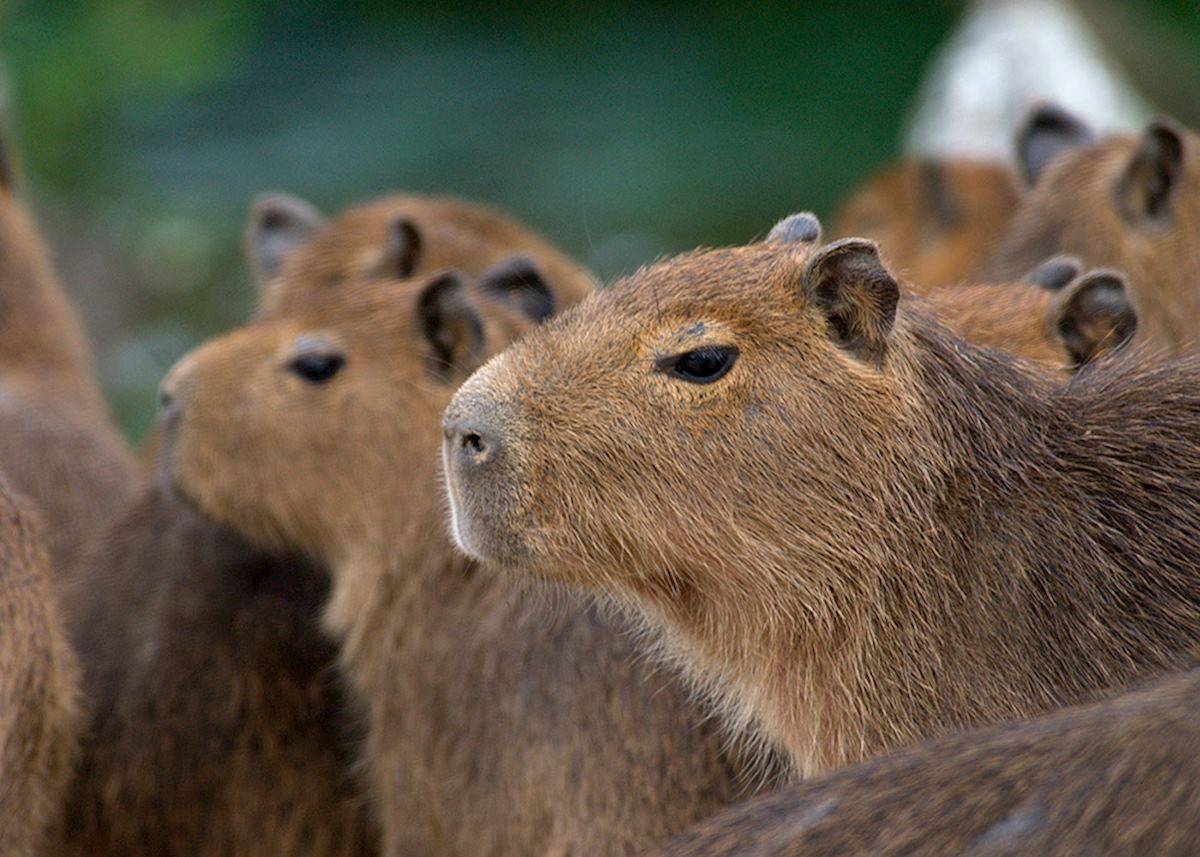 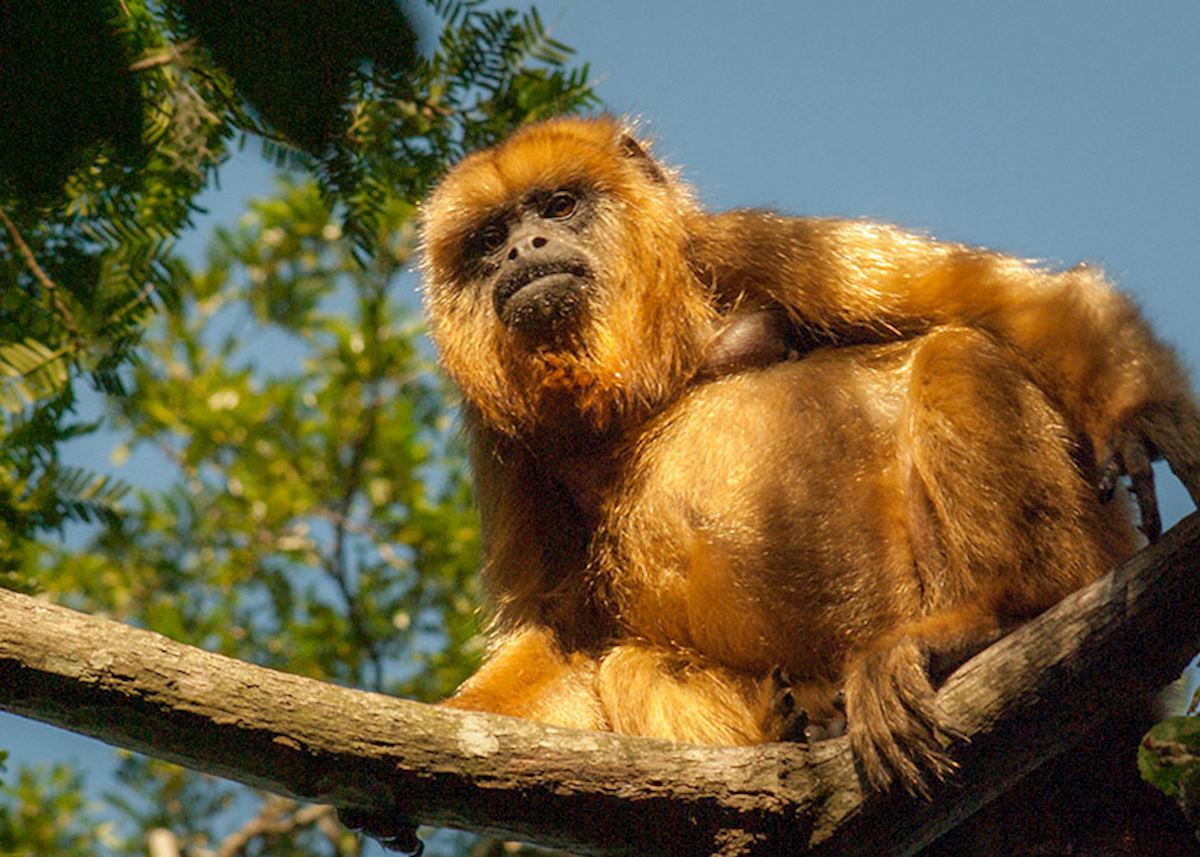 First, my guide and I headed to a pier, where we encountered a huge colony of capybaras before getting out onto the water. As my guide expertly punted the boat along in near silence, the wildlife calmly revealed itself: everything from endemic caiman species to marsh and pampa deer. My guide even pointed out the best angles for photos.  I freely admit I am no birder, but I was also soon spotting and naming a whole range of avifauna.

Getting on a horse is almost obligatory in this part of Argentina, especially when you’re staying on an estancia: not only is it part of the culture, it’s also a fulfilling way to explore the landscape and wildlife. The ride exposed me to more of the 360 bird species found in the wetlands, and also gave me a feel for the history of the place and its way of life.

Despite being somewhere I previously had very little knowledge of, I can truly say that the Iberá Wetlands gave me the wildlife experience of my life — and all in the comfort of an excellent small hotel.

As is generally the case with Colombia, its Los Llanos wetlands are still finding their feet as a visitor destination. And, that’s a lot of their appeal. In Brazil’s Pantanal, your guides tend to be conservationists, brought there by a desire to study. In Los Llanos, local llaneros will guide you —hardy ranchers and horse people who’ve grown up learning about their native wildlife and working the land.

And, when you head off in search of wildlife, it will be moving across grasslands and savannah on private ranches rather than a conservation zone. Plus, you can swap a 4x4 for exploring on horseback, by mountain bike or on foot. 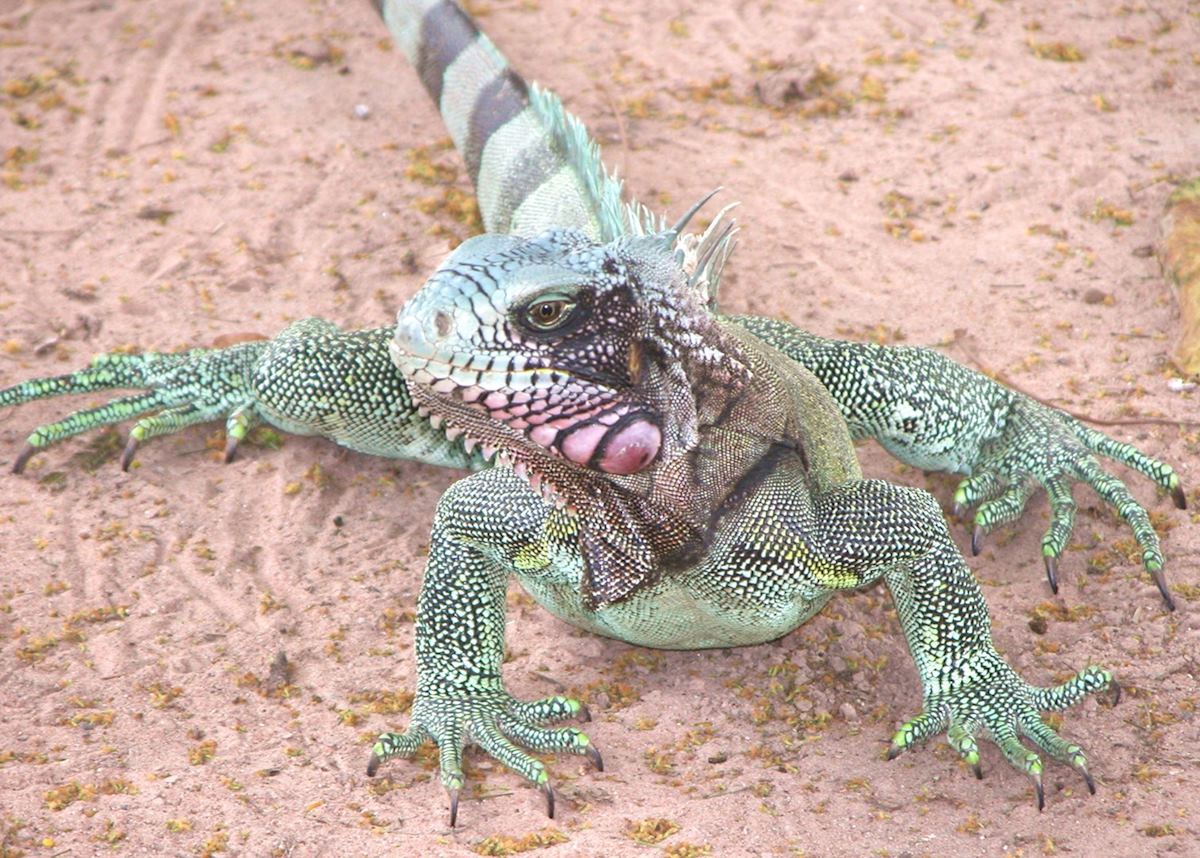 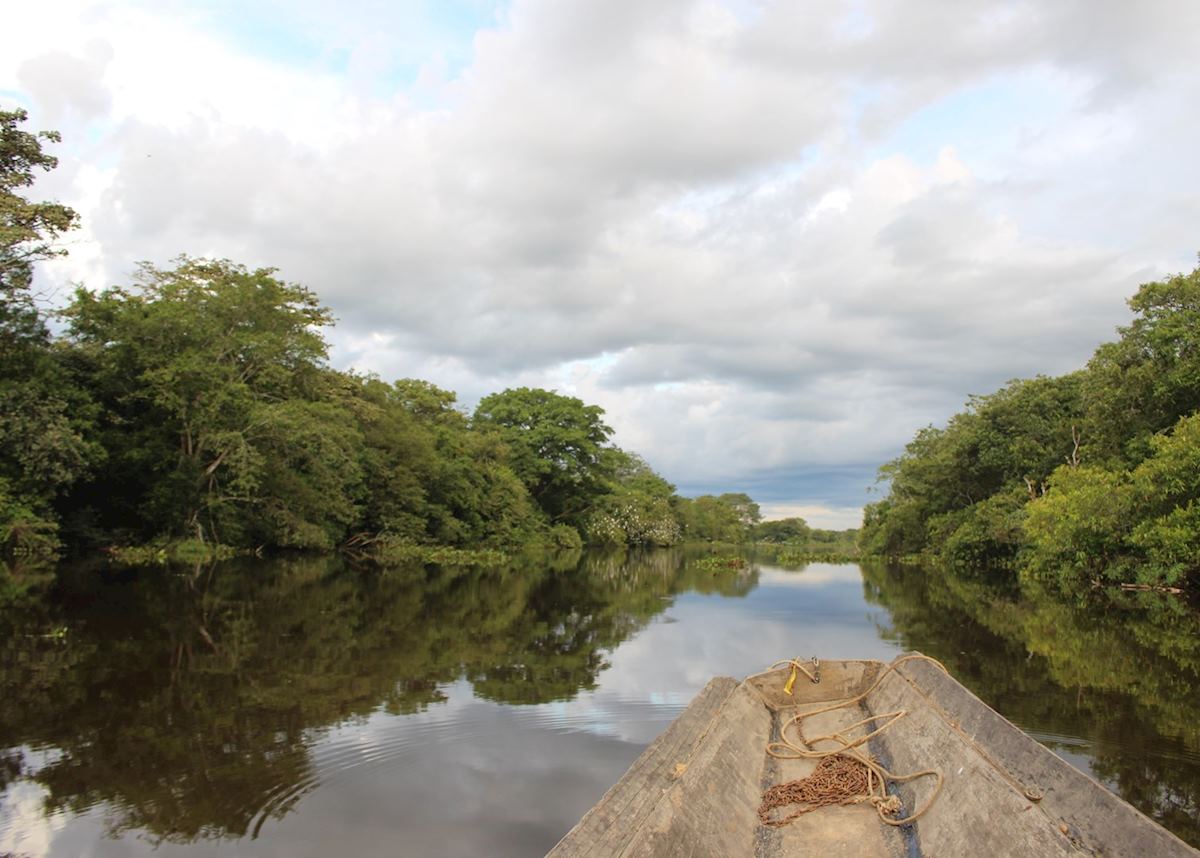 You might join the llaneros as they go about their day-to-day activities and indulge with them in life’s simple pleasures. I recall sitting around one day while lunch was cooking and my llanero guide produced his guitar to sing, more for his benefit than mine, while his fellow llaneros dozed in hammocks away from the midday heat. Our meal was thick cuts of beef grilled on skewers, rustic-looking and simply prepared but moreish and satisfying.

Los Llanos’s plains and their silty rivers, ponds, lakes, temporary waterways and gallery forests can conjure up some of the best wildlife watching in South America. The birdlife alone is prodigious.

Scarlet ibises are the emblematic bird of Colombia, with a plumage that’s top-to-toe fiery crimson and imbued with spiritual significance for Colombians. You’re also likely to see macaws and toucans, and birds of prey like savanna hawks and nighthawks.

You might also spot rheas, cousins to the ostrich, and owls, which are active by day and night. They have a talent for blending in with tree bark, but your guide will be adept at picking them out. 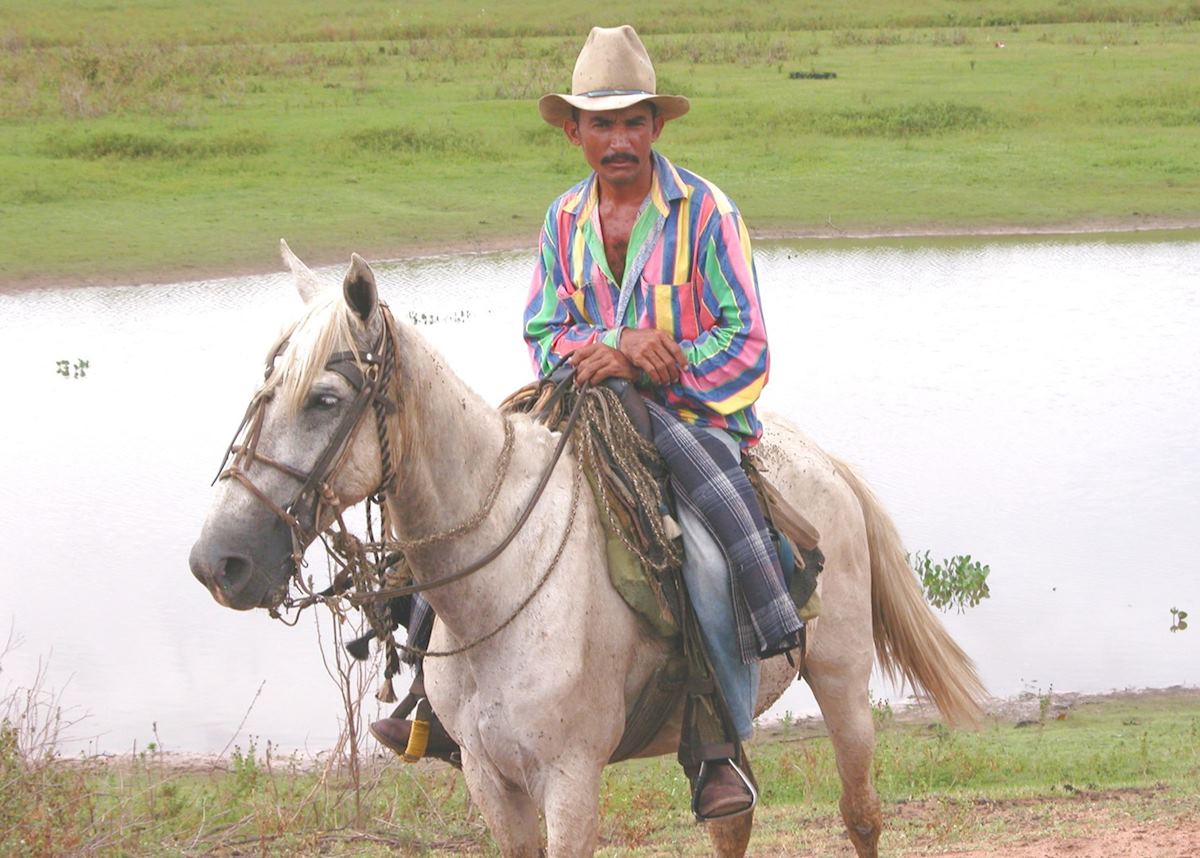 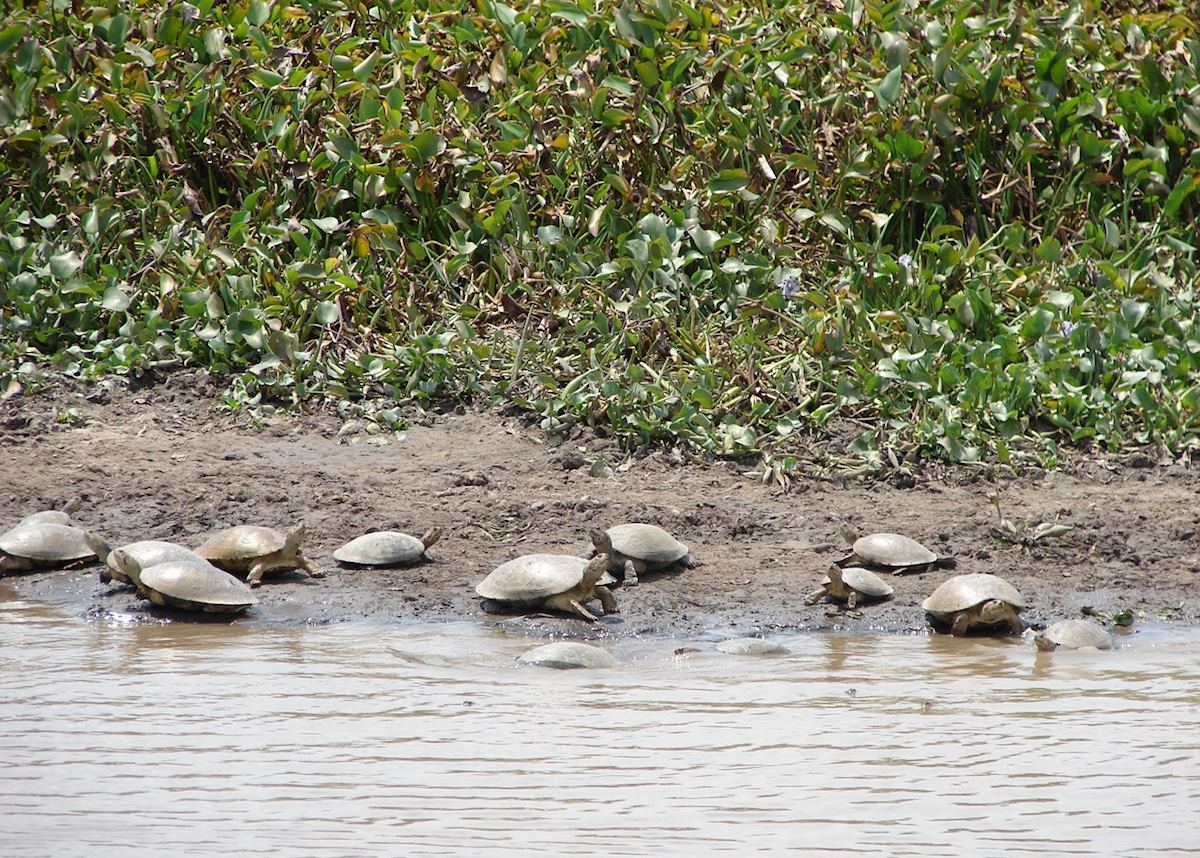 Caimans, capybaras and giant anteaters are among the bigger species you might come across. And, then there are jaguars. Brazil is still the best place to see South America’s biggest big cat, but they’re present in Los Llanos. If you did happen upon one here, it would be all the more exceptional because you’d be seeing them in the environment where they’re least studied.

The city of Yopal serves as the hub of the wetlands. Once guerrilla territory, it now has one comfortable, attentive and central hotel. Being based in town gives you the option to wander down to the main square for a drink or a meal from one of the restaurants serving up grilled meats and salads. The region is developing all the time, and we’re also looking at haciendas that offer a place to stay. I think there’s still a lot to come from Los Llanos.

Start planning your trip to Brazil, Colombia and Argentina 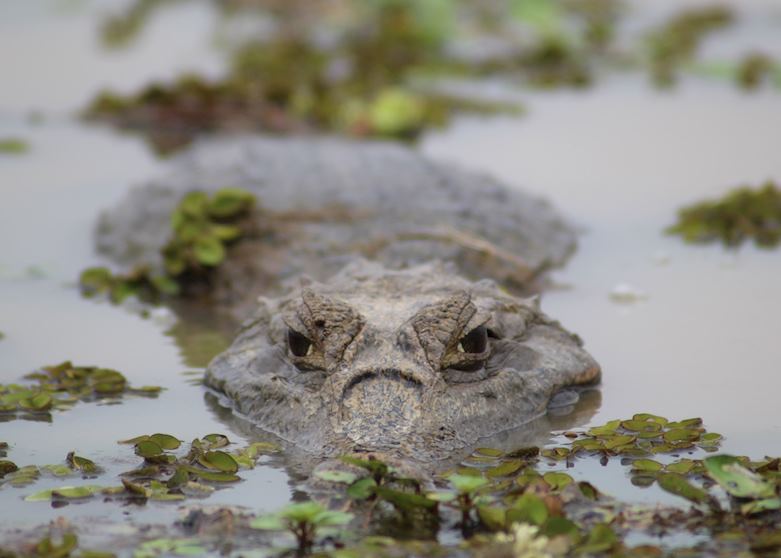 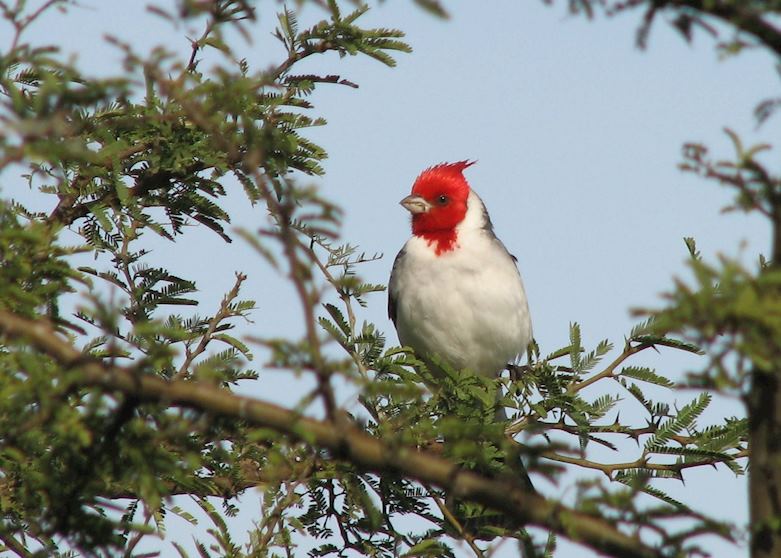 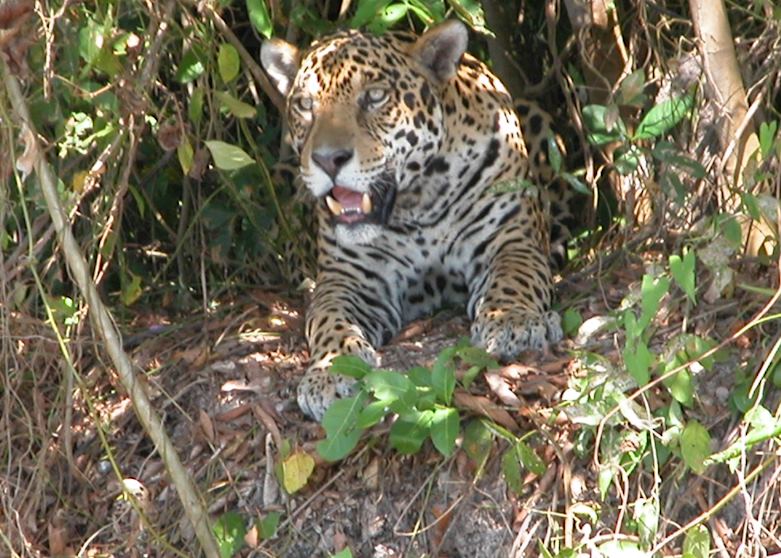 In search of the jaguar in Brazil's Pantanal