Located in the heart of Milan’s fashion district, the Armani Hotel epitomizes the style of Giorgio Armani, who has added his design to every element of this luxurious property. Arriving at the hotel, you’re immediately whisked up to the 7th floor reception where you’re greeted with panoramic views across Milan through the floor to ceiling windows.

True to the Armani style, the rooms are elegantly minimalist, beautiful in the simplicity of their style and furnished with the highest quality material. Privacy here is paramount; the room’s security camera will show you who is outside and there's a circular alcove to screen your room from anyone at the door. The rooms themselves are in classic Armani shades with gray leather walls and sumptuous fabrics on the beds. Each room uses the latest technology, with everything from the curtains to the air-conditioning and lighting controlled by iPad. The gray marble bathrooms are all equipped with large bathtubs and separate walk-in showers. 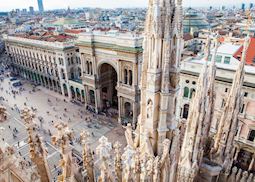