Exhibiting the elegance for which Lake Como is known, Tremezzo is a particularly handsome village set in the mid-lake region, arguably the most captivating section of Lake Como. It looks across the water to Bellagio and Varenna and is a short drive from Menaggio. Along with its position on the lake, Tremezzo's main attraction is the grand Villa Carlotta with its botanic garden.

The village sits at the foot of Monte Procione in a protected position and has played host to Verdi, Queen Victoria and Greta Garbo among others. A small selection of restaurants and bars line the waterfront and a promenade runs along the lakeside.

One of Tremezzo's most impressive sights is the waterfront Villa Carlotta, a grand 17th-century villa named after a Russian princess. Visiting the mansion gives you an appreciation of the regal lifestyle noble families enjoyed while staying here.

The house is filled with period antiques and a 19th-century art collection. It’s surrounded by a manicured botanic garden, which bursts into bloom in the late spring with more than 150 different varieties of rhododendrons, azaleas and camellias. Set amid cedars and sequoias are bamboo and tropical gardens, a fern valley and a geometric Italian garden, all framed by views over the lake. 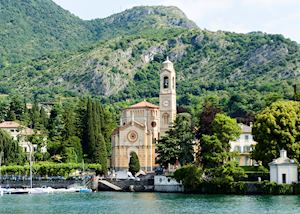 Other villas line the lake around the village, including the 18th-century Villa la Quiete, once home of the abbot-poet Giuseppe Parini. The 18th-century Church of San Lorenzo with its neo-Gothic façade and frescoes by Tagliaferri is also worth a visit, while the Baroque Church of Saint Mary holds a 17th-century statue of the Black Madonna.

A five-minute drive from Tremezzo is the 18th-century Villa del Balbianello. Set on a steep, wooded headland with dramatic views, the primrose-yellow villa cascades down a series of terraces to the lake. Its last owner before being bequeathed to the Fondo Ambiente Italiano, the national heritage trust, was Milanese entrepreneur and explorer Guido Monzino. The house remains much as he left it, filled with 18th-century furniture and Chinese, African and pre-Columbian art.

Outside, the terraced gardens offer lake views, while the small museum has displays on Monzino's life and adventures. The villa is a popular wedding venue and it was used as a location in Casino Royale and Star Wars: Episode II.

Perhaps the greatest pleasure of a visit to Tremezzo, though, is a walk along the waterfront or a boat trip to admire the views and see the houses built along the shore. For visits to the surrounding villages and panoramic views of the lake, walk along the promenade to nearby Cadenabbia, which has good ferry links to Bellagio.

This sample itinerary will give you an idea of what is possible when you travel in Tremezzo, and showcases routes we know work particularly well. Treat this as inspiration, because your trip will be created uniquely by one of our specialists.