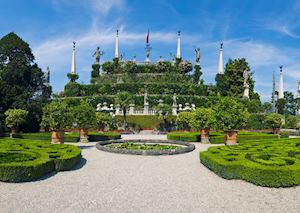 The islands are best known for their sumptuous palaces and ornamental gardens, and it’s possible to visit some of them on a day’s boat trip. The Borromeo family turned these tiny islands into opulent expressions of their enormous wealth with grand Baroque palaces filled with fine art and antiques and lavish botanical gardens featuring plant species from around the world. Isola Madre and Isola Bella offer a snapshot of the family's regal tastes, while Isola Superiore, more commonly known as Isola dei Pescatori (Fisherman’s Island), has the feel of a humbler fishing community.

For the best views of the area, take the cable car to the summit of Monte Mottarone which rises steeply behind the town. Halfway up you switch cable cars and can take a short walk to see the modest Alpine Botanical Gardens. After the second cable car journey, a chair lift takes you to the summit where you'll get a sweeping panorama of the whole region, the lakes and its islands.

This sample itinerary will give you an idea of what is possible when you travel in Stresa, and showcases routes we know work particularly well. Treat this as inspiration, because your trip will be created uniquely by one of our specialists.