San Marco is the historic core of Venice and at its heart is Piazza San Marco, or St Mark’s Square, the focal point of this striking city. Surrounded by imperial apartments and some of Venice's oldest cafés, it’s dominated by an imposing basilica dedicated to Saint Mark who, as the legend goes, was destined to rest here by divine prophecy. So, when the city's patron saint died in Alexandria in 828, Venetian authorities set about secretly bringing him home.

Glass has been made on Murano since the 13th century, when the city's glassmakers retreated to the island to mitigate the risk of fire to the main city and to better protect the valuable secrets of their art. The glass made here is prized across the world for its high quality and incredibly intricate patterns, made from mixing minute portions of glass. We can arrange for you to take a factory tour to see the glass blowers at work or visit the Museo del Vetro to learn about the long history of glassmaking on the island. 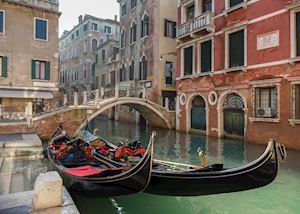 At first glance, Venice’s Jewish ghetto is an anticlimax. The Campo del Ghetto Nuovo, the oldest section, looks like little more than a desolate square with a wellhead and a few lonely trees. The space is hemmed in by high, shuttered buildings (in such a confined space, the inhabitants had no choice but to build vertically) and the odd shop selling Hanukkah lamps.

Appropriately named ‘The Phoenix’, Venice’s opera house has bounced back from three fires in its canalside location just west of St Mark’s Square. A classical-style building dating from 1792, the city’s oldest opera venue came into its own during the 19th century when great Italian composers such as Verdi and Rossini premiered their latest works here (including La Traviata).