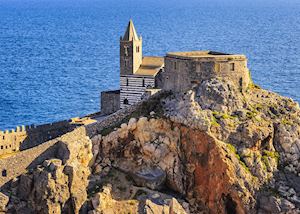 The steep cliffs, turquoise waters and pastel-hued villages that form the backdrop of the Gulf of La Spezia have attracted numerous writers and artists including DH Lawrence, author of Lady Chatterley’s Lover, and Virginia Woolf. Most famously, it enchanted the Romantic poets Percy Bysshe Shelley and Lord Byron with its evocative setting and mysterious caves.

Across the Gulf of Poets from Porto Venere, the ancient Etruscan town and Roman port of Lerici is a warren of aristocratic townhouses and grand piazzas. It’s dominated by a 12th-century castle which once controlled entry to the Gulf. Today it houses a paleontology museum and offers sweeping views over the bay.

This sample itinerary will give you an idea of what is possible when you travel in Porto Venere, and showcases routes we know work particularly well. Treat this as inspiration, because your trip will be created uniquely by one of our specialists.