Milan is Italy’s high-powered financial, industrial and fashion capital, home to the country’s stock exchange and most famous fashion houses, as well as two international football teams. Scratch below the surface though, and you'll find a city of high culture where Leonardo da Vinci spent much of his life and where the critics at the La Scala opera house are as renowned as its musical dramas. Much of the city has been recently regenerated with public spaces restored to their former glory. The banks of the canal have been reclaimed by new cafés and restaurants, ensuring the city's cosmopolitan atmosphere is matched by the buzz of a wholehearted embrace of the 21st century.

Right next to the Duomo, this neoclassical shopping arcade is an important celebration of the country’s unification and is named after the first king of the Kingdom of Italy. Inside, the elaborate mosaic work depicts the continents as well as the coats of arms of Turin, Florence and Rome, capitals of the newly-formed kingdom. The gallery is filled with high-end designer stores and has become a popular place to congregate and people watch from its numerous cafés. A high level walkway offers a great overview of the cruciform arcade and the city around it.

Following the destruction of Milan’s grand Teatro Regio Ducale in 1776 the city's wealthy banded together to fund the construction of a replacement ballet and opera venue by pre-purchasing their own private boxes. Built on the site of the former church of Santa Maria alla Scala, the new Teatro alla Scala, more widely known today as La Scala, opened its doors in 1778. Still one of the world’s most famous opera houses, La Scala boasts some 2800 seats that overlook one of Europe's largest stages. Over the years the opera house became renowned for hosting many of the world’s greatest artists and boasted Arturo Toscanini as its principal conductor for many years. The opera house also held a close relationship with Giuseppe Verdi, who spent much of his later life in Milan. For those wishing to pay homage to this grand building, there is a small museum dedicated to the costumes, paintings and artifacts of past performances and it also offers a glimpse of the lavish interior, if rehearsals are not in progress.

In a country where the sport is revered, San Siro Stadium is one of the great temples of football (soccer). Built in the 1920s and home to both AC and Inter Milan — who play on alternate weekends from October to May — the stadium can hold 85,000 spectators and is an incredible place to watch an international game. The stadium was the venue for the 2016 Champions League final and also plays host to various pop concerts during the summer months. It's also possible to go behind the scenes and tour the museum, locker rooms, pitch-side and tunnel. 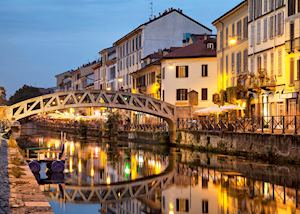