Vietnamese weather is notoriously difficult to predict and, even in the dry season, you’re best to pack a waterproof. This makes the fishing village of Nha Trang particularly attractive to visitors. Set in its own microclimate in Vietnam’s central province, it averages 300 days of sunshine a year — which lights up some of the country’s best beaches. And, with a small, well-connected airport, Nha Trang is easy to tag onto a trip through Indochina. 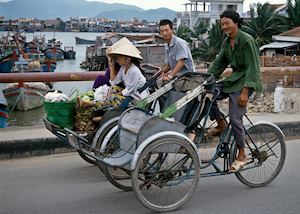 The fishing village itself has moved farther north, leaving the main town and surrounding beaches to hotels, restaurants and beach clubs. Although, you will still see blue and red fishing boats bobbing along the sea, proudly flying the Vietnamese flag.

The town itself isn’t particularly notable (though it does retain a sense of local pride as the host for Miss World in 2008), so we recommend choosing one of the surrounding beachside hotels and settling in for a few nights’ relaxation. If you do get fidgety, you could visit Po Nagar, a 12th-century Cham temple that’s still in use today. It’s to the north of the town on the banks of the Cai River.

There are 19 islands scattered along the nearby coastline, rearing up out of the water like the humps of a whale pod. Most hotels offer boat trips out to the islands to snorkel, dive or enjoy a beachside barbecue. A good spot is Mun (Black) Island, which has some healthy coral formations and shimmering schools of silverfish.

To the south of the town and only half an hour from the airport is Mia Nha Trang, a modern beach resort surrounded by frangipani trees and pineapple plants. A series of minimalist, lemongrass-scented villas and condos line a long sweep of pale-golden sand that leads into a bay of calm water. You can spend days here dozing in a hammock, lying by the zen-like pool or trying out one of the many water sports.

A little further south is the Amanoi, one of the most luxurious resorts in the region, with a private beach looks out toward Vinh Hy Bay. Its collection of Vietnamese-inspired pavilions poke up from the jungle of Nui Chua National Park making it look, from a distance, like an ancient mountain village. With a focus on wellness, you could stay in a spa house with its own private spa facilities. 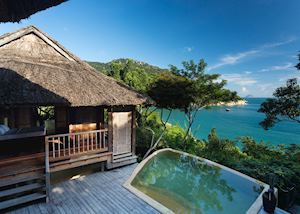 To the north of the town is a jungle-crusted peninsula reaching out into the South China Sea. Only reachable by boat, it’s an oasis of boulder-strewn beaches backed by thick jungle. Six Senses Ninh Van Bay occupies its own secluded cove here, the thatched roofs of its individual villas poking up from the jungle. You can while away your time with spa treatments, candlelit meals and the attention of your private butler.

Farther north along the peninsula is An Lâm Retreats Ninh Van Bay. As you arrive by speedboat, you’ll spot a giant wooden lotus-like structure looming up from the coastline — the resort’s signature restaurant and bar. The rest of the hotel follows suit, slipping its contemporary villas in along the boulder-strewn beach or lifting them on stilts high above the jungle with views across the bay.

From January to September you’re pretty much guaranteed a blue sky and balmy temperatures — although the occasional quirk is always possible. October to mid-December is classed as rainy season, but it only tends to rain occasionally, with brief, heavy tropical showers in the afternoon.

Until quite recently Nha Trang was best known to the Vietnamese as one of the country’s biggest fishing ports.

Now, however, the town’s pristine waters and long sandy beaches attract visitors looking for a quieter alternative away from Southeast Asia’s busier coasts.

Although some of the town has succumbed to over-development there are still one or two highly attractive properties on the outskirts. 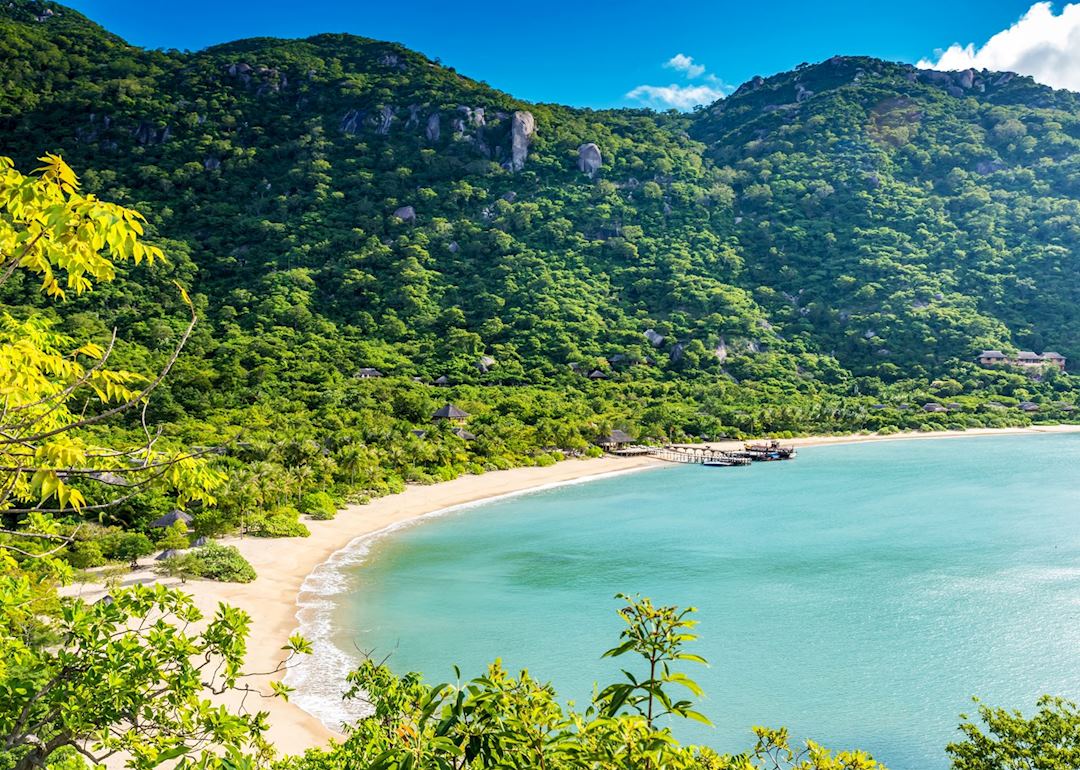 We’ve selected a range of accommodation options for when you visit Nha Trang. Our choices usually come recommended for their character, facilities and service or location. Our specialists always aim to suggest properties that match your preferences.