Practically the southernmost town in Chile (the credit technically goes to the much smaller Puerto Williams), Punta Arenas is a mishmash of corrugated-iron-roofed buildings, a busy port, and a small but steadily growing population, boosted by an upturn in the local oil industry. Facing the Strait of Magellan, it’s often battered by freezing southerlies and has a colonist backstory. It started out as a settlement created by Captain John Williams, a seaman from Bristol working for the Chileans. It moved to its present site in 1848, and an English sailor named it 'Sandy Point' (Punta Arenas).

After a brief period as an unsuccessful penal colony, Punta Arenas expanded during the late 19th-century wool boom and attracted many immigrants, mainly from Britain and the Balkans.

Punta Arenas has been Chile’s doorway to Antarctic exploration since the days of Robert Falcon Scott. Today, it’s also a major port for cruises into the icy reaches of Tierra del Fuego, and a gateway for fly-cruises to Antarctica. A drab town in many ways, it does have some notable monuments strewn along its waterfront, which the Avenida Costanera del Estrecho and 21 de Mayo roads run along.

They include a replica of Ferdinand Magellan’s tall ship, Victoria, and the rusting remains of the shipwrecked Lord Lonsdale, an English frigate that now serves as a de facto monument to all seafaring explorers.

A boat trip away from the town lies Magdalena Island, a wind-ravaged place that’s an important breeding site (and a protected area) for Magellanic penguins.

Punta Arenas is very much a place of transition. Unless you wish to visit the penguin colony, we recommend simply staying for a night after your flight here, before continuing your onward journey to Torres del Paine National Park in Chilean Patagonia.

Visit Punta Arenas between October and March, which are the optimum times for experiencing Torres del Paine National Park. There’ll be fewer crowds at these times of year. As an additional bonus, in October and November the spring wildflowers are just coming into bloom.

Our itineraries will give you suggestions for what is possible when you travel in Punta Arenas, and they showcase routes we know work particularly well. Treat them as inspiration, because your trip will be created uniquely by one of our specialists.

We’ve selected a range of accommodation options for when you visit Punta Arenas. Our choices usually come recommended for their character, facilities and service or location. Our specialists always aim to suggest properties that match your preferences.

Our specialists seek out authentic ways to get to know the places that could feature in your trip. These activities reflect some of the experiences they've most enjoyed while visiting Punta Arenas, and which use the best local guides. 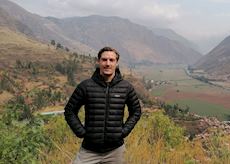