The long and picturesque valley south of Quito toward Cuenca is the start of Ecuador’s indigenous heartland.

Creeping up the mountain slopes in different shades of green and gold, the patchwork-quilt fields give way to snow-capped peaks.

The most imposing of these is the perfect cone shape of Cotopaxi, the highest active volcano in the world. At its foot, its eponymous national park is an ideal place for spending the night in one of the local haciendas, from where you can enjoy a gentle hike, a visit to a rose plantation or some horseback riding.

The surrounding countryside is also peppered with indigenous villages which play host to colourful local markets on different days of the week.

If you drive off to the east you can visit the pretty spa town of Banos, resting at the foot of the temperamental Tungurahua volcano, or if you continue down the Avenue of Volcanoes you will reach the town of Riobamba, which lies in the shadow of Chimborazo, the country’s highest volcano.

This is the starting point for the dramatic ‘Devil’s Nose’ train journey. As the train wends its way south through the mountains and lakes, it reaches a steep cliff where a series of thrilling switchbacks commence that allow the train to zigzag down the track, carved out of the sheer rock face.

This sample itinerary will give you an idea of what is possible when you travel in Avenue of Volcanoes, and showcases routes we know work particularly well. Treat this as inspiration, because your trip will be created uniquely by one of our specialists.

Map of Avenue of Volcanoes

Places near Avenue of Volcanoes

Photos of Avenue of Volcanoes

Accommodation choices for Avenue of Volcanoes

We’ve selected a range of accommodation options for when you visit Avenue of Volcanoes. Our choices usually come recommended for their character, facilities and service or location. Our specialists always aim to suggest properties that match your preferences.

Ideas for experiencing Avenue of Volcanoes

Our specialists seek out authentic ways to get to know the places that could feature in your trip. These activities reflect some of the experiences they've most enjoyed while visiting Avenue of Volcanoes, and which use the best local guides. 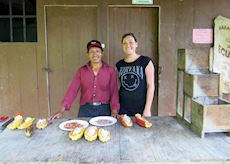