The Galapagos Islands were officially discovered by the Spanish Bishop of Panama in March 1535 when his ship was blown off course en route to Peru.

His descriptions to the King of Spain were full of tales of incredibly tame nature of the wildlife, such as the sea lions, giant tortoises and iguanas. The islands were put on the map after Charles Darwin visited in 1835 whilst serving as a naturalist on the HMS Beagle. He then wrote ‘On the Origins of Species’, his theories on evolution and natural selection, based on what he had seen of the unique species and how they had developed and adapted to their environment with no outside influences. 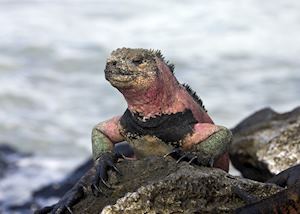 Today the 13 major islands and the dozens of smaller ones are a living laboratory of evolution and a place where the animals have no fear of man. This means that when you are walking on the carefully marked trails, you must be careful not to tread on a nesting booby or a sunbathing iguana, it also means you can frolic in the sea with curious baby sea lions.

Our itineraries will give you suggestions for what is possible when you travel in the Galapagos Islands, and they showcase routes we know work particularly well. Treat them as inspiration, because your trip will be created uniquely by one of our specialists.

Map of the Galapagos Islands

Photos of the Galapagos Islands

Accommodation choices for the Galapagos Islands

We’ve selected a range of accommodation options for when you visit the Galapagos Islands. Our choices usually come recommended for their character, facilities and service or location. Our specialists always aim to suggest properties that match your preferences.