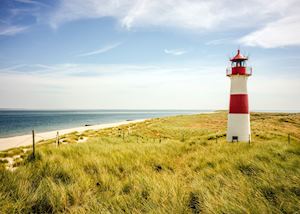 The slender island of Sylt, with its long beaches, thatched houses and shifting shoreline, is a romantic, windswept resort that is little known, giving you a luxe retreat that’s shared by the celebrity jet set.

Tucked between Denmark and the North Sea in the northernmost part of Germany, it attracts locals in the warmer months. Long mudflats, rolling sand dunes and remote villages with thatched-roof houses provide plenty of opportunity to explore. The beach itself, along the island’s 40 km (25 miles) of western shore, is blessed with white sands, the sheltering Red Cliff and plenty of water sports to try.

Salt producers, oyster farms and other rustic businesses exist here, alongside restaurants, hotels and shops worthy of its frequent celebrity guests. A Watt hike — named for the Wattenmeer tidal flats — lets you explore the wildlife and shells of the broad wetland. You can follow it with a visit to an oyster farm on a private boat with Champagne.

Things to see and do in Sylt

You can fly to the remote German island of Sylt, which curves in a sickle shape off the coast of Denmark, but the most photogenic way to get there is by train. Passengers and their cars travel by rail across a narrow causeway built between the North Sea and the UNESCO-protected Wattenmeer or Wadden Sea, the largest unbroken system of tidal flats in the world.

Once on the island, the peacefulness of its pastoral nature greets you, with cows grazing in meadows and low, 18th-century Old Frisian houses. These gabled, brick structures, with their thatched roofs, are built to survive the wind and weather in this northern European maritime locale. The various villages of the small island reveal their distinctive styles as you traverse the landscape, over marshes, rose-dotted sand dunes, low sandy cliffs and grassy countryside.

White-sand beaches on the North Sea

On the western side of the island is Sylt’s truest draw: the 40 km (25 miles) of sandy beach, facing out into the North Sea. The pristine stretch of white sand brings well-off Germans during the warm summer months in June through August, and has historically attracted such luminaries as Marlene Dietrich and Thomas Mann, who wrote in a local guestbook that he had ‘lived deeply’ in Sylt.

The beach also features the rentable shelters known as Strandkorb, little wood-and-wicker beach chairs with striped canopies and built-in folding tray tables for the most relaxed of oceanside dining. You can get your lunch from a hidden fish restaurant you can only reach on foot, and bring it back to enjoy on the sand. Or, go to one of the well-known restaurants, like Sansibar, a wine haven where locals watch the sunset.

The main resort area of the island is called Westerland, and it stretches from the sandy beach, seafront stage and aquarium on the western shore through the middle of the island with its hotels, restaurants and shops. Island walks and cycling paths abound here.

We also offer a Watt hike, a local name for an exploration of the tidal flats to search for wildlife from sandworms to seals. For a richer experience, you can include a visit to an oyster farm on a private boat, and enjoy Champagne on board.

Late May through early September is the best time to visit, since the beaches, water sports and other summer activities are the main draw. For nature lovers, Watt walks do happen in the winter, when the mud flats can be caked with ice.

We’ve selected a range of accommodation options for when you visit Sylt. Our choices usually come recommended for their character, facilities and service or location. Our specialists always aim to suggest properties that match your preferences.