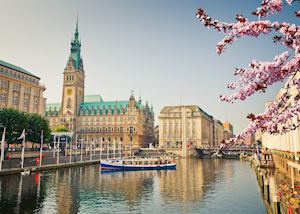 Set at the mouth of the Elbe River where it flows to the North Sea, Hamburg is a city with a strong sense of its own textured history. While many European cities feature medieval buildings alongside newly built structures, Hamburg’s contrasts are particularly striking.

Long an important shipping and strategic location, Hamburg was all but destroyed by the Allies in 1943. Since then, rebuilding has taken many forms, including a Gothic church that’s now a war memorial, an old warehouse district that’s now a city-within-the-city and a vibrant art scene that’s anything but underground.

The raucous Fish Market is open Sundays and sells everything from seafood to souvenirs. Inside the century-old Fischauktionshalle, a live band plays rock and jazz, but doesn’t drown out the bellowed bargaining.

From the elegant city hall to the diverse Kunsthalle museum, from the glass wave-form of the Elbphilharmonie to the brick immensity of the Speicherstadt warehouses, Hamburg surprises at every turn.

Things to see and do in Hamburg

Elbe River and Port of Hamburg

The Elbe River, which has been extensively dammed, flows through the middle of the city and forks out into tributaries, canals and lakes, making Hamburg feel like a watery playground.

Hamburg is a port town at its core — the third busiest in Europe, it’s known as Germany’s Gateway to the World. The cranes, container ships and other markers of a major shipping lane dominate the city’s skyline, yet the beauty of Hamburg’s mixed architecture and vibrant everyday life are blended in. You can enjoy water sports and boat tours that give you a different perspective on the city, including a port tour that explores many of the city’s other highlights.

Rising out of a spit of land that thrusts into the middle of the water is the massive and modern Elbphilharmonie, a glass building constructed atop a 1960s warehouse, with a design of rising waves cresting its top. With its glassy façade, its curving bulk reflects and merges with the sky above the water. From the front, it looks like a ship setting sail.

The Elbphilharmonie houses three concert venues, with some of the most meticulously designed acoustics available. The Plaza, an observation deck at the top of the brick section of the building, is open to the public and gives you a view of Hamburg and the Elbe.

The tallest building in the world from 1874 to 1877, Saint Nicholas Church in Hamburg was heavily damaged in World War II. While the basic structure and the spire remained intact, Hamburg chose not to rebuild, and instead has turned the surviving structure into a war memorial, or Mahnmal.

Up a 76.3 m (250 ft) lift through the surviving spire, you can get views of the city, placed in the context of the wartime destruction. A museum in the crypt beneath the church gives a quiet yet unflinching account of the war.

While Hamburg was devastated by the bombings of 1943, we can help you seek out the handful of hidden-away buildings that remain intact.

The Deichstrasse on the waterfront of one of the canals is the oldest remaining street in Hamburg’s old town. It dates back to the 14th century and is home to some of the oldest buildings in Hamburg, built in the 17th century. They were spared in the Great Fire of 1842, and have been carefully restored. The oldest warehouse, too, is still in Peterstrasse, and was built in 1780.

Along the cobblestone streets, you can now also visit restaurants and cafés serving local delicacies, in-between soaking in the history. 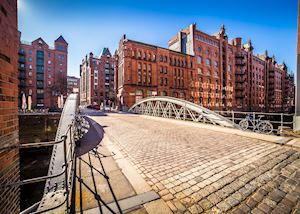 Translating to City of Warehouses, the Speicherstadt is a district of antique warehouses built on timber pilings along the river. The sides of the old brick buildings seem to rise directly out of the water, where boats could pull directly up and load and unload goods. You can visit the site, designated a World Heritage Site by UNESCO in 2015, on our walking tour, and it’s a major focus for boat tours of the Port of Hamburg.

The Speicherstadt is also a part of the district known as HafenCity, a quarter that’s been under modern redevelopment since 2001 and has rejuvenated the old port area.

One of the largest art museums in the country, the Kunsthalle, or art hall, was founded in 1850 and now houses over seven centuries of European art. The permanent collections focus on 14th-century North German painting, Dutch and Flemish masters of the Renaissance, French and German drawings and paintings from the 19th century and a wide range of modern and contemporary art from around the world.

The museum’s three connected buildings are located in the old town, and you can access them via an underground passage.

Hamburg’s town hall, a working governmental building, is also a historical and architectural site that you can visit. The neo-Renaissance building, with its golden eagles and copper-green roof, was completed in 1897 after the original town hall burned in 1842.

It’s also one of the only intact examples of historicity in Hamburg. In the period of its building, the German Empire was creating and renovating structures in grandiose historic styles, intending to impress upon the world their great wealth and independence.

The building opens up onto the main market square, where a fountain dedicated to Hygieia, the goddess of health and hygiene, was built in remembrance of the cholera epidemic of 1892.

Northern Germany can get cold, especially near the shores of the North Sea, so the warmer months of May through September are the best times to enjoy Hamburg. December is also popular for the city’s Christmas market. 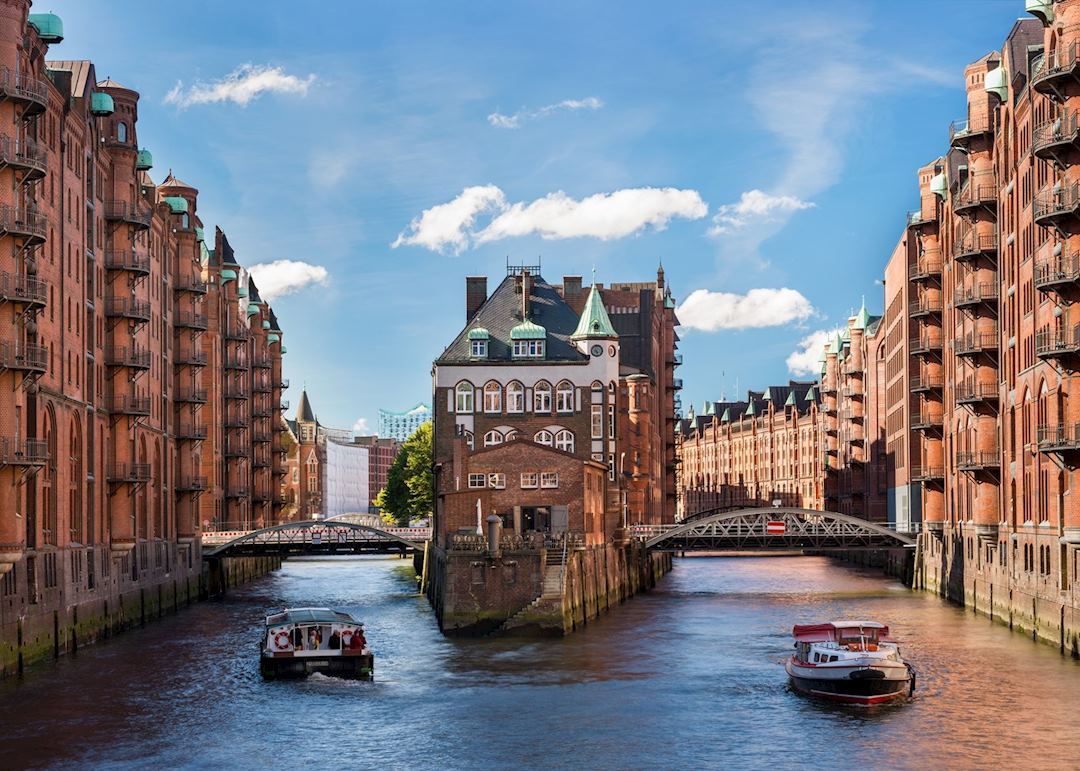 Start planning your trip to Hamburg

We’ve selected a range of accommodation options for when you visit Hamburg. Our choices usually come recommended for their character, facilities and service or location. Our specialists always aim to suggest properties that match your preferences.

Our specialists seek out authentic ways to get to know the places that could feature in your trip. These activities reflect some of the experiences they've most enjoyed while visiting Hamburg, and which use the best local guides.