Gleaming modern skyscrapers and a restored medieval old town in the riverside city of Frankfurt. 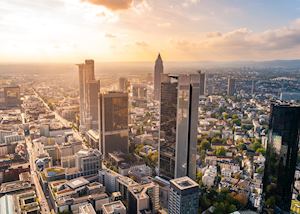 Though a largely modern metropolis with a gleaming skyline of glass, steel and concrete skyscrapers, evidence of Frankfurt’s past as a medieval city can still be found in the pastel-painted, half-timbered buildings in its old town.

Frankfurt, sometimes referred to as Mainhattan as a portmanteau of its location on the Main River and its Manhattan-esque skyline, is a financial and business hub, with many global and European corporations calling it home. It’s also home to one of the world’s busiest airports and the largest financial district in Europe.

However, the city also offers myriad art museums, a neoclassical opera house and a multitude of universities, making the city a cultural hub. Stroll along the stalls of produce and spices at the Kleinmarkthalle, explore the medieval square of Römerberg, visit the birthplace of Johann Wolfgang von Goethe or see where kings of the Holy Roman Empire were crowned at Frankfurt Cathedral.

Things to see and do in Frankfurt

Literary lovers can tour German writer Johann von Goethe’s birthplace and the adjacent museum. A large house seemingly covered in windows, the building was restored as closely as possible to its original condition and furnishings after being destroyed in 1944 bombings.

Because the house looks much the way it did when von Goethe lived there, you can get an authentic feel of what it was like for a fairly wealthy family in the mid-1700s. Walk through the actual room where he was born, see the puppet theatre room with the theatre that became the inspiration for The Theatrical Mission of Wilhelm Meister, or admire the desk where he did some of his first writing.

See Frankfurt from above at The Main Tower, a 56-floor office building, making it the fourth tallest building in Germany. At the top of the building is an observatory deck, where you can stand outside and look out over the cityscape. During inclement weather the deck may be closed, so be sure to check in advance.

There’s also a restaurant and lounge that offers lunch, dinner and drinks with a hard-to-beat view. Head up for dinner and watch the sun set over the city, as the skyline comes alive with lights. We can arrange for you to visit the Main Tower as part of our walking tour of Frankfurt.

The Main River, which has long played a major role in Frankfurt’s economy, is the longest tributary of the Rhine. Along the riverbank, you’ll find manicured, tree-lined promenades where you’ll see the city’s residents walk and run. Strolling along the river will also give you an up-close view of some of Frankfurt’s bridges, ranging from classic arch bridges to more modern cable-stayed bridges.

You can also visit Museumsufer, a landscape of museums lining both banks of the Main, anchored by the sprawling historic art museum Städel. Museumsufer also includes the Jewish Museum Frankfurt, where you can get a look into the lives of Jewish people living in Frankfurt through the years, as well as the Historical Museum, which displays relics from Roman times to today.

One of the few churches to receive the Imperial Cathedral designation, Frankfurt’s cathedral stands tall and proud with a red-sandstone Gothic façade. Excavations have found that building foundations on that site date back to the 7th century, though the current building is the third iteration of the church. The most recent restoration was done in the 1950s, after the cathedral was heavily damaged during World War II bombings.

From 1562 through 1792, emperors of the Holy Roman Empire were crowned here, and imperial elections were held in a chapel on the south side of the church’s choir. While visiting, you can walk through the Dommuseum, a little museum that holds a small number of precious liturgical objects.

A sandstone Renaissance building that welcomes you through its arched porticoes, the Alte Oper is Frankfurt’s old opera house. Now used as a concert hall, the building faces a large, open square with an elegant fountain. The gleaming skyscrapers of Frankfurt’s financial district are visible over the trees behind the fountain, offering a striking contrast with the rows of medieval buildings to the right.

The Alte Oper originally opened in 1880, and was the site of many opera premieres, including Carmina Burana. It was destroyed in the 1944 bombings of Frankfurt and by the time it was finally rebuilt, a new opera house had replaced it. The façade of the building recalls the original structure, but the inside was constructed to reflect its modern purpose. 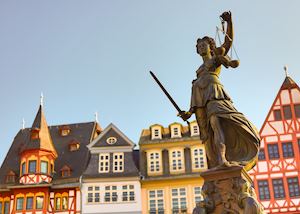 In the heart of Frankfurt’s old town, Römerberg is a medieval square with architecture that was painstakingly restored after being heavily damaged during World War II bombings. The square is anchored by the Römer, a pastel triple-peaked façade with a stepped-gable roofline.

Stroll past the half-timbered houses and admire the Fountain of Justice, a patinaed fountain depicting Justitia, the Roman goddess of justice, armed with her sword and scale. As you walk and take in the architecture, you can also stop at a café and spend some time in the various shops.

An indoor market hall with more than 150 stalls, Kleinmarkthalle offers patrons fresh food, produce and flowers. It’s a great place to try regional specialities, such as the herb-flecked green sauce, or international delicacies, such as Iranian baklava.

You can stroll past the butcher and fish stalls, stop and smell the fresh spices or head up to the upper level where a wine bar opens up to a terrace.

The best time to visit Frankfurt is during late spring (April and May), or autumn, (September and October). The weather is temperate during this time of year and the crowds thinner than the hotter months of June and July. 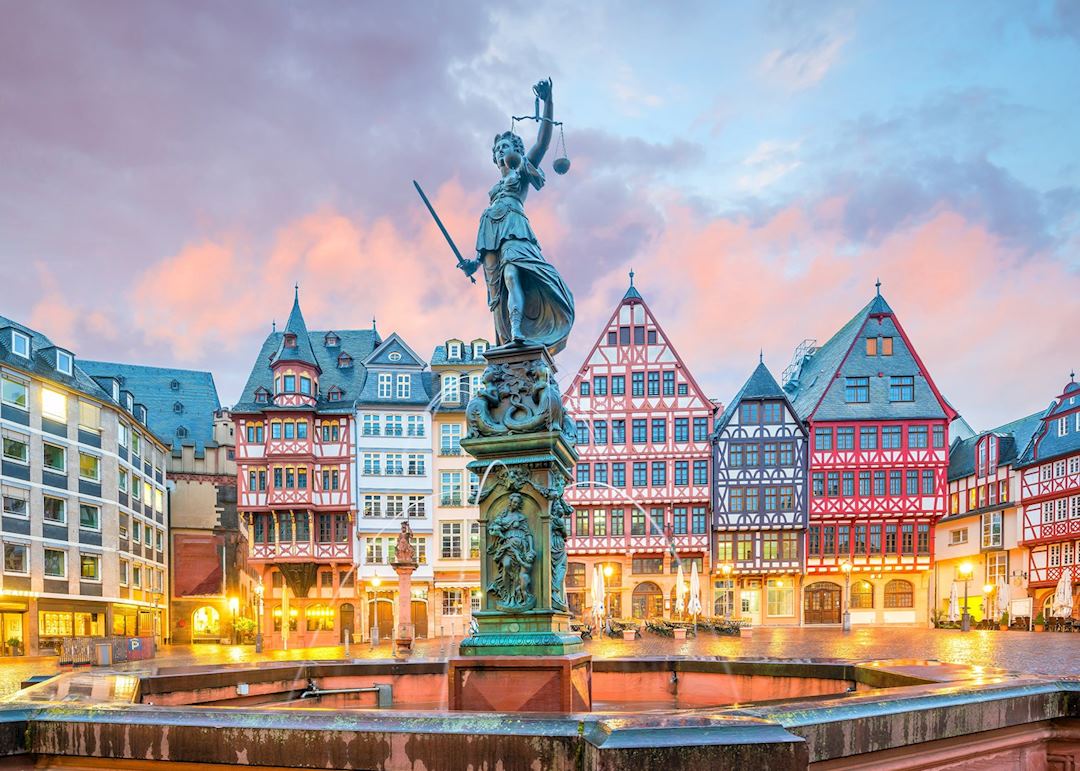 Start planning your trip to Frankfurt

We’ve selected a range of accommodation options for when you visit Frankfurt. Our choices usually come recommended for their character, facilities and service or location. Our specialists always aim to suggest properties that match your preferences.