The past and present meld in Freiburg, the modern medieval marvel at the edge of the Black Forest 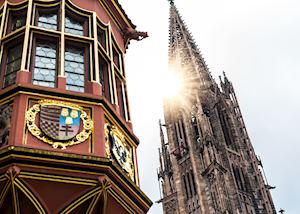 Freiburg Minster, the cathedral at the city’s heart, is the main draw. Finished in 1200, the cathedral took 300 years to build, and its fanciful gargoyles at times reflect the builders’ discontent with the bishop, who wasn’t paying them on time. The rest of the structure, with its sandstone bricks that glow gold and red in the afternoon sun, is a marvel of Gothic spires, intricate arches and stained glass. The central spire was the first to be built with an open latticework structure, giving it an airy lightness as it pierces the sky. Around the cathedral, the Münstermarkt or farmers' market operates six days a week, and the cathedral’s many exterior carvings include the shapes of bread.

As you walk the old town streets, you’ll also notice the patterns laid into the cobblestones, including the shapes of pretzels, beer steins and scissors that indicate the businesses that once existed nearby. Outside the city hall, look down for the coats of arms of the many sister cities that Freiburg enjoys, including Innsbruck, Matsuyama in Japan and Madison, Wisconsin.