Thailand has been luring visitors with artfully designed hotels and extravagant experiences for years — try the treepod dining at Soneva Kiri for starters. You’ll find things run smoothly, and there’s plenty of potential to see Thailand in comfort.

If you’re keen to veer off-piste but like your accommodation to come with five stars, this is a country where you don’t have to compromise. An exclusive tented camp eases comfort levels in the remote province of Chiang Rai, teak riverboats ply Bangkok’s backwaters, and beach resorts are surrounded by nothing but jungle. After my most recent trip journeying through Thailand, I’ve put together some of my luxury highlights. 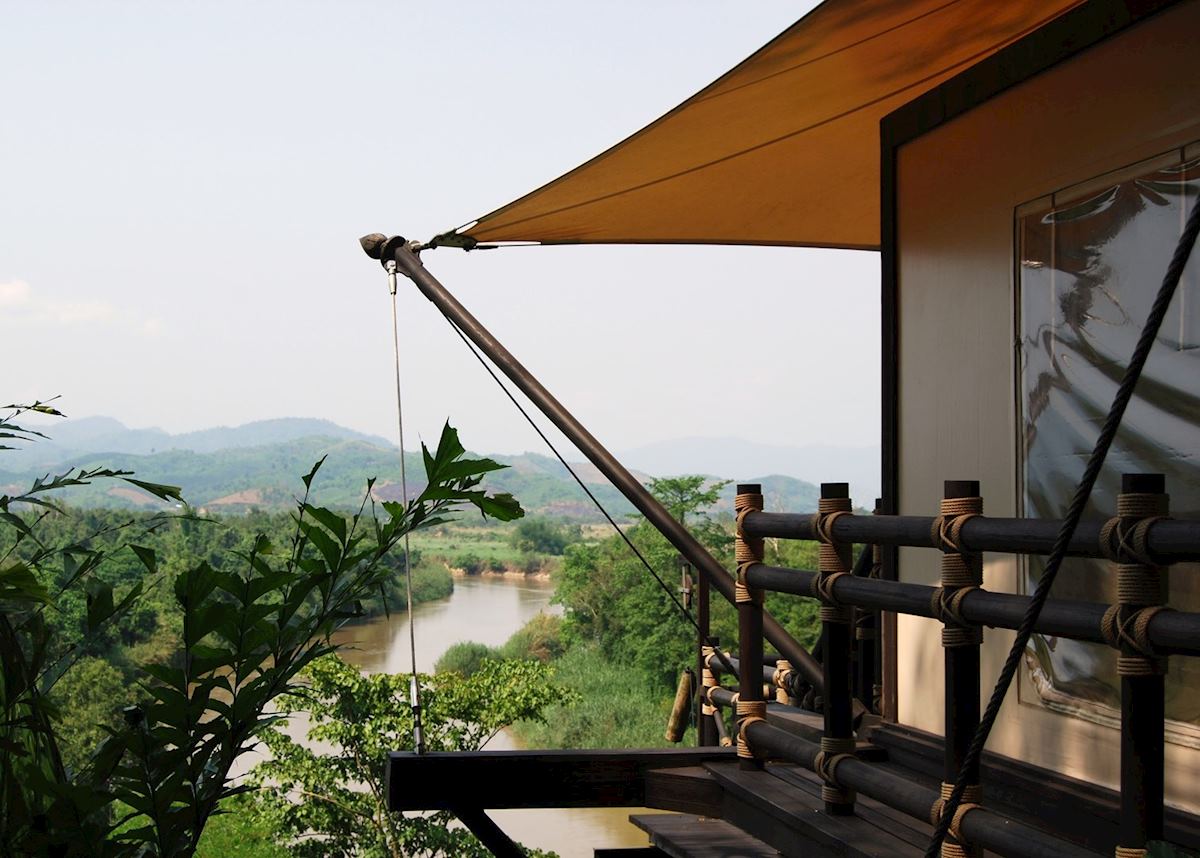 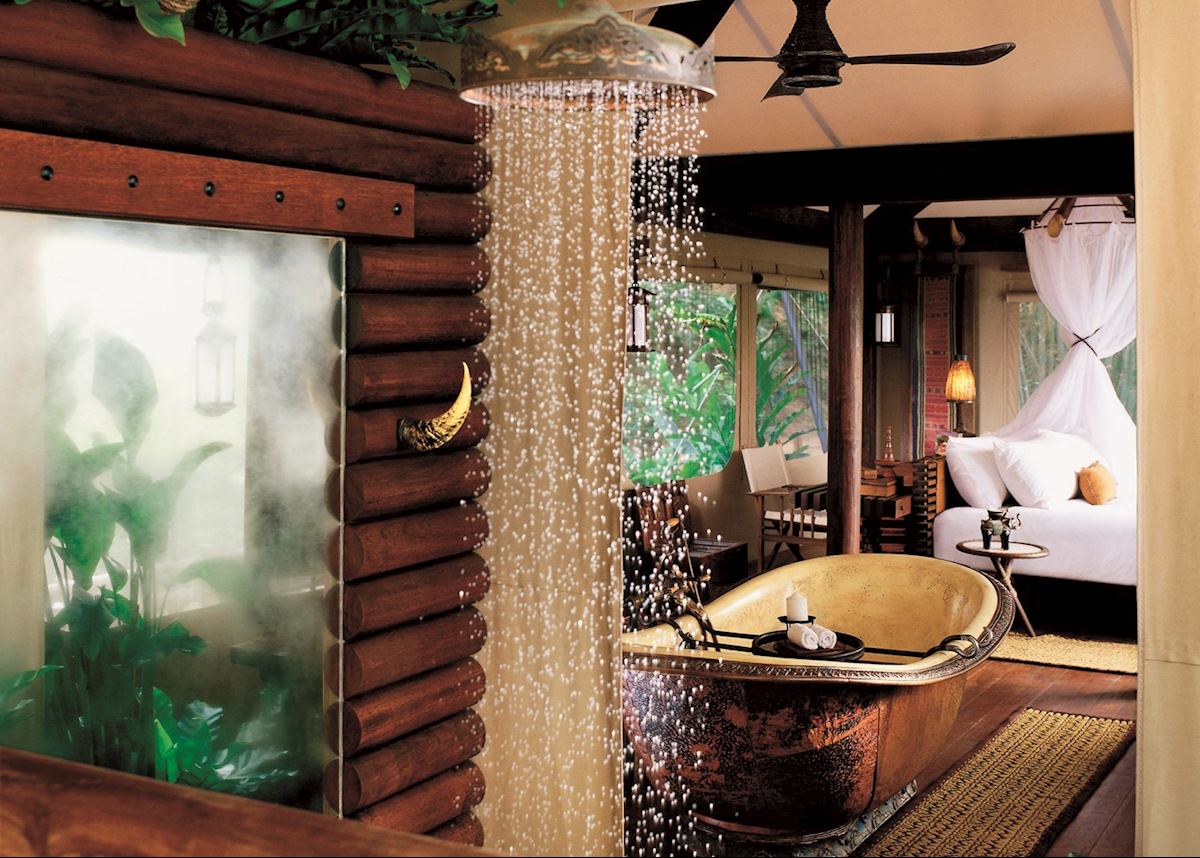 The tents at the Four Seasons camp are designed to feel like an adventurous jungle outpost — although I doubt any explorers ever had it this good. Each tent is individually perched on a stilted platform on the side of a jungle-covered ridge, overlooking the grasslands where a herd of rehabilitated elephants roam.

Inside, the tents are furnished with a collection of polished, wooden furniture, brass antiques and a bed that looks out across the Ruak River. Outside, there’s a balcony furnished with a wooden hot tub, rain shower and lounge area.

Tucked right into the northeast corner of Thailand, known as the Golden Triangle, the camp nudges the border with Burma to the west and Laos to the east. During your stay, you can take a day-long three-country tour on the Ruak River, a tributary of the Mekong, stopping at border towns in Laos and Burma.

While the camp sounds remote, it’s easy to reach by a domestic flight from Bangkok to Chiang Rai, followed by an hour and a half drive.

Spending a day with elephants

The camp runs on an all-inclusive basis, with a number of activities thrown in. For me, the standout experience was spending a day with the elephants that live on site.

Four Seasons is partnered with the Golden Triangle Asian Elephant Foundation, which rehabilitates working elephants. There are still around 3,500 elephants being put to work in Thailand, and the foundation’s remit is to move them, along with their mahouts, from employment into nature reserves and sanctuaries, and ultimately back to their natural behaviour.

As there’s not enough protected land in Thailand to fit the animals, a solution has been to join up these tracts with resorts that own large expanses of land. The Four Seasons shelters 20 elephants in its lowland forest and grassland, along with housing the mahouts who care for them.

My day with the elephants began at breakfast. As I ate in the open-air dining pavilion, I was alerted to a rustling in the surrounding tall grass. Then I could just make out the gentle curve of an elephant’s head making its way toward me, before it burst through the grass with its mahout in tow.

After being introduced, I spent the day learning about elephant behaviour — my elephant had a vehement dislike of ants, a hangover from a few once crawling up her trunk. It’s a carefully managed experience that’s only available to a few guests each day, so I advise booking in advance.

Cruising the Chao Phraya River on the Anantara Dream 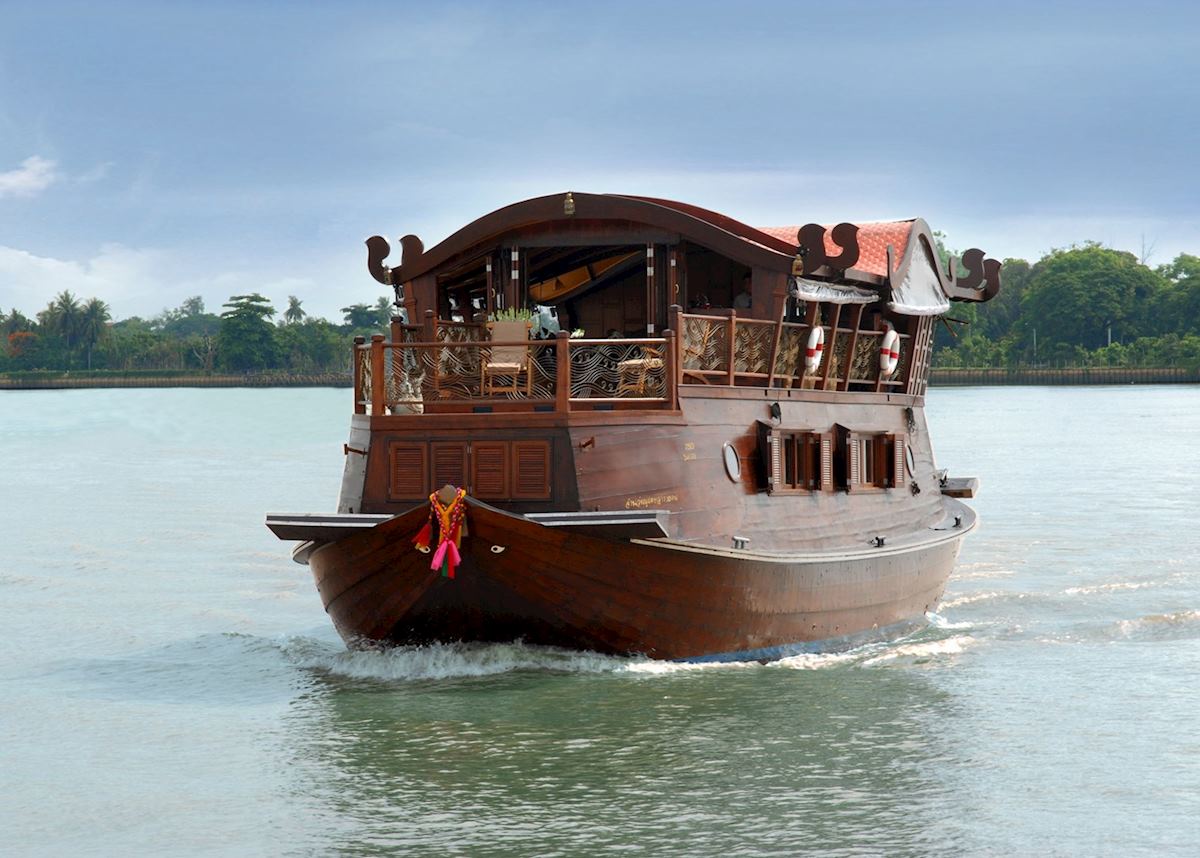 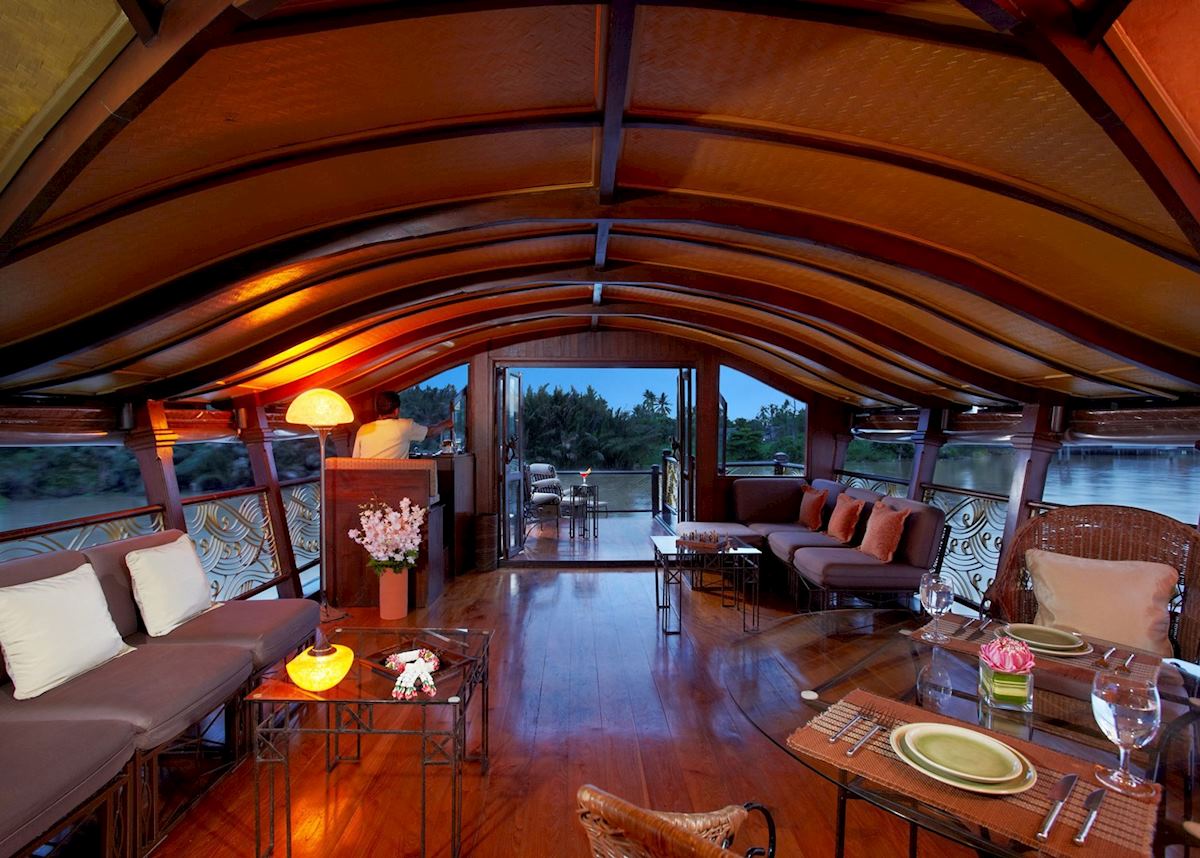 Gold-lacquered royal barges have regularly graced the Chao Phraya River for more than 700 years (and still do), giving it the nickname the ‘River of Kings’. The serpentine waterway weaves its course from central Bangkok, passing some of Thailand’s most venerated palaces and temples, to the once royal capital of Ayutthaya.

The Anantara Dream may not be gold, but its carved teak, silk-draped cabins feel worthy of its name. The 100-year-old rice barge has been carefully converted into a two-bedroom houseboat, which offers a three-day, two-night return cruise from Bangkok to Ayutthaya. You can share the experience (each bedroom sleeps up to four people) or have the boat to yourself.

The crew, which includes your personal chef, attend to your needs on board, while an experienced guide leads onshore tours of the 17th-century Royal Palace in Bangkok and a selection of riverside temples. I’d been slightly apprehensive about suffering from temple fatigue, but I needn’t have worried. You’ll see a big enough variety of styles and periods to keep the novelty alive — including Wat Arun, whose bright porcelain decoration was once used by Chinese ships as ballast.

Cooking with a local in Bangkok 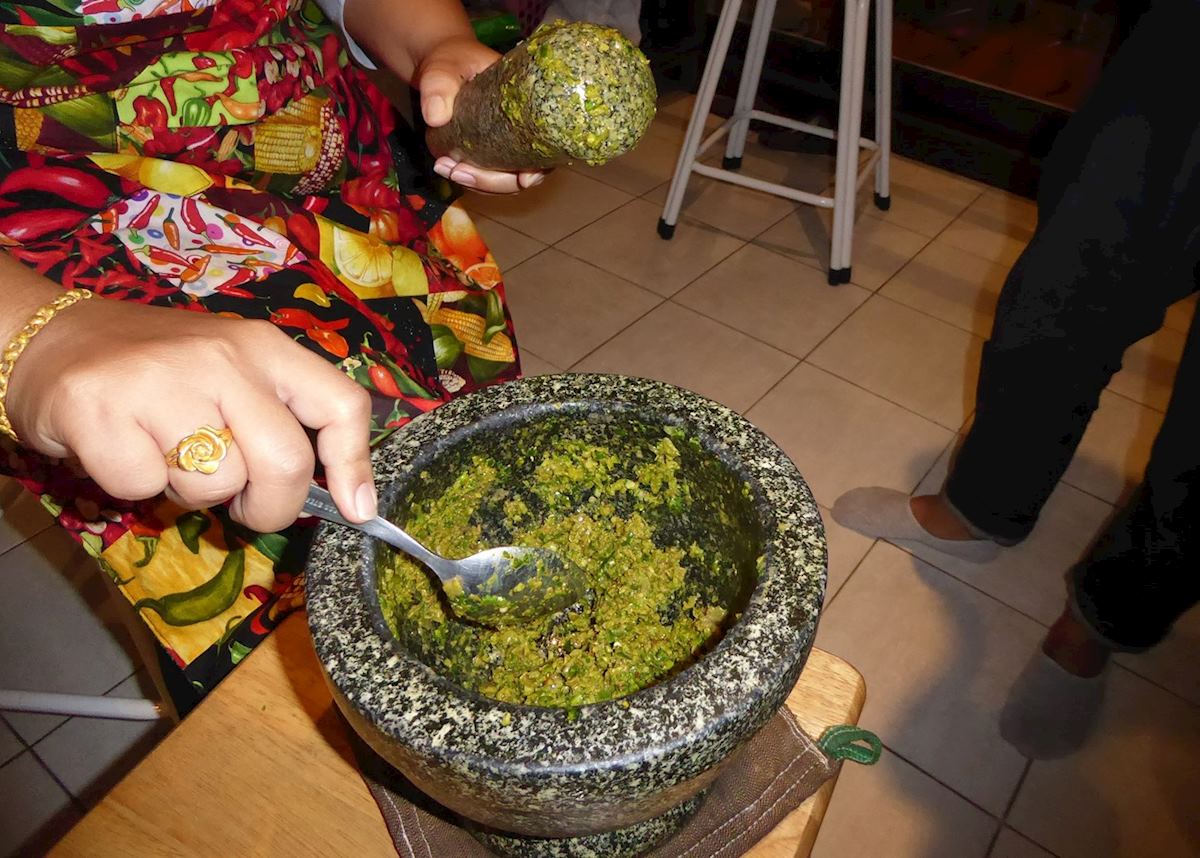 I could spend weeks luxuriating in Bangkok’s selection of high-rise city hotels with their innovative spas, Michelin-starred restaurants and infinity pools (choose the Siam Kempinski to rub shoulders with the latest Thai celebrities). The real luxury of being in the city, though, is finding an experience that connects you with its inhabitants.

Angsana has been running cooking classes from her home for years, her skills and recipes passed down from her mother who was a successful street vendor. Her kitchen, she was eager to explain, is typical of most city-dwellers’ (although very well-sized), with a long table in the middle for preparing food.

As classes run on a private basis, you’re free to choose which dishes you cook — although Angsana is happy to advise — from traditional tod man pla (fishcakes) to fakthong sangkhaya, a steam-cooked, custard-filled pumpkin that was her grandmother’s guilty pleasure.

In some restaurant-run courses you’re more of a spectator, but I left Angsana’s with lemongrass-scented fingers and flecks of curry paste on my shirt (she did offer me an apron), as well as a handful of hand-written recipes. 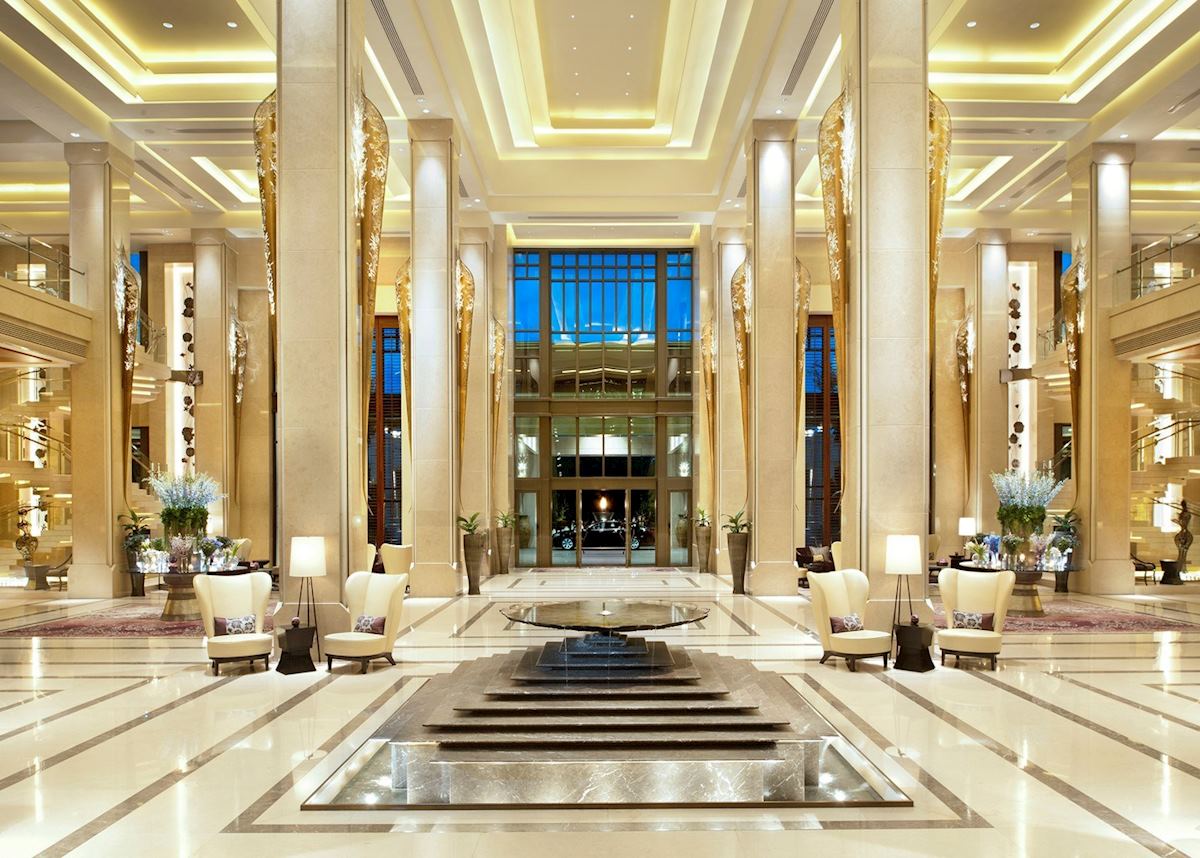 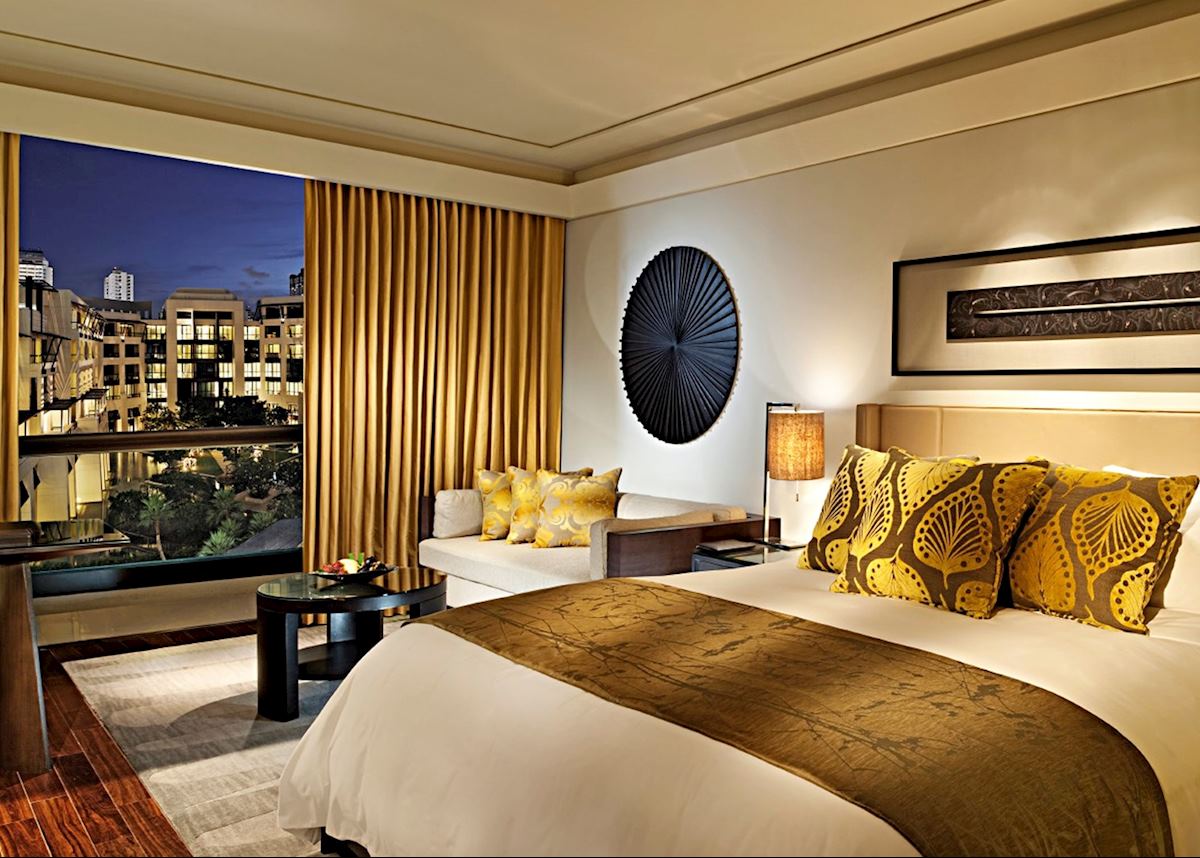 The island of Koh Yao Noi

While clusters of hotels have taken over some of Thailand’s coast, there are still plenty of tranquil stretches. Away from the party beaches, much of the coast is cared for by luxurious resorts or protected as marine reserves. 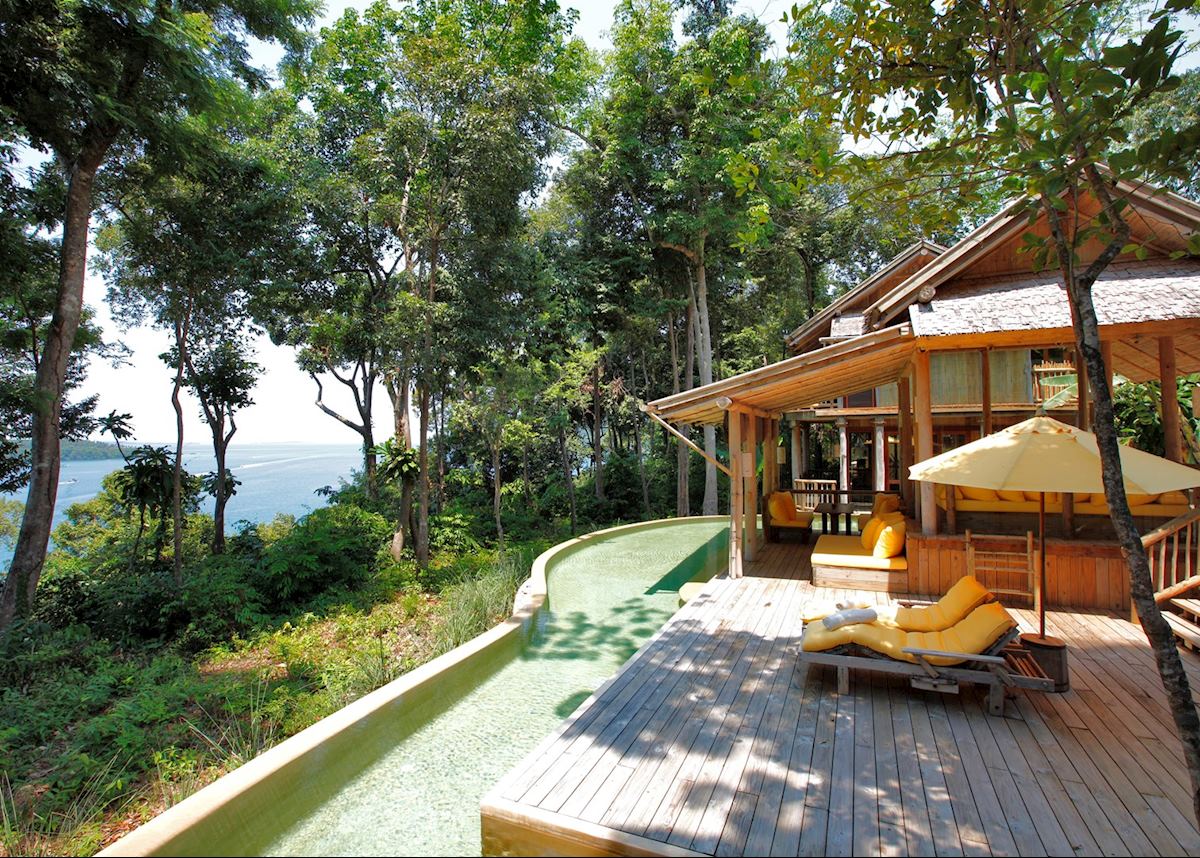 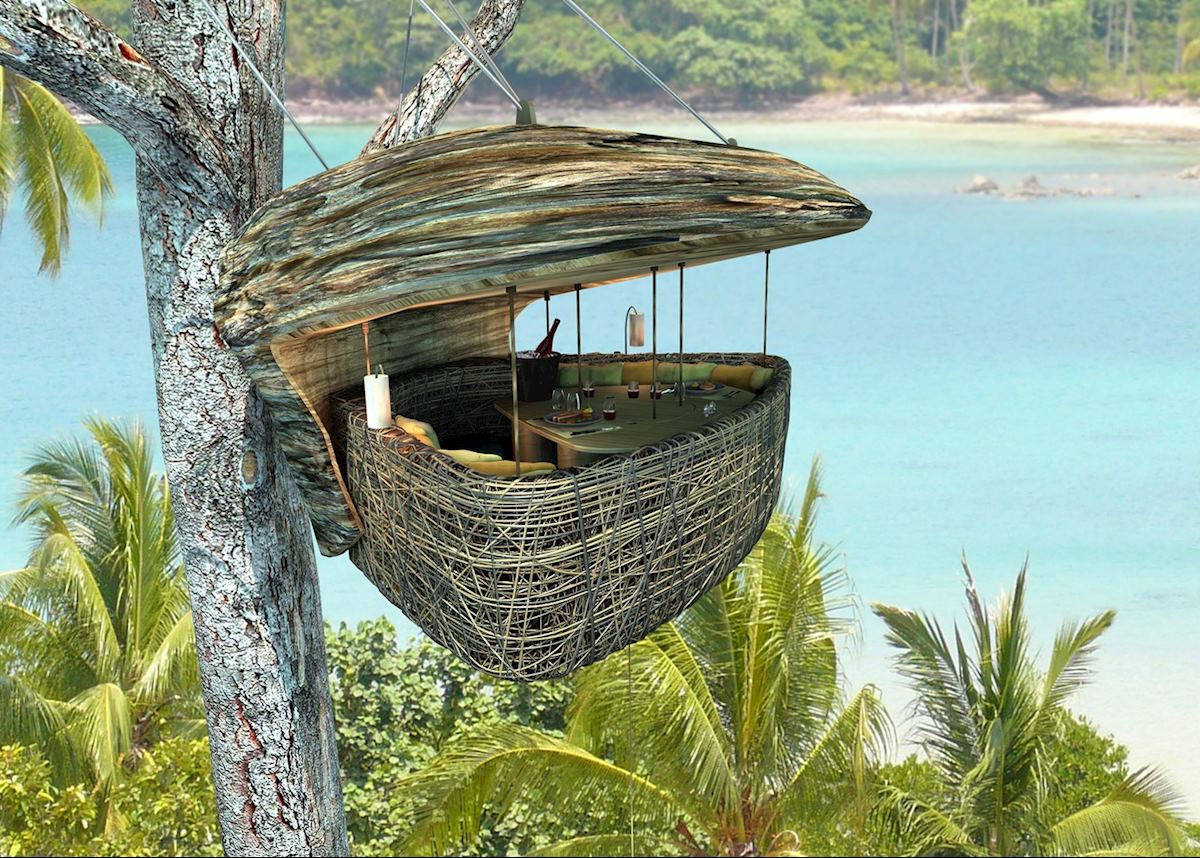 Soneva Kiri isn’t on a private island, but it certainly feels like it is. A 90-minuite light aircraft flight — with views right across the Gulf of Thailand — from Bangkok takes you to the island of Koh Kood. From here, you catch a private speedboat to skim around the coast to the hotel.

Close to the border with Cambodia, the island is one of Thailand’s largest, yet it remains the least developed. The hotel is surrounded by one of the most biodiverse rainforests in Thailand: it supports more than 100 species of butterflies alone.

Most of the hotel’s villas are larger than the average family home, and come with their own golf cart for you to get around the rambling resort. You’ll also have your own pool wrapping around a wooden terrace, which my personal butler decorated with candles each evening.

Everything here is made to wow you, from the complimentary chocolate room and ice-cream parlour to the open-air cinema. In the state-of-the art observatory, visiting astronomers will help you identify constellations and count Jupiter’s moons, while the resident sommelier is on hand to guide you through the hotel’s selection of world-renowned wines. If none of that appeals, the concierge service can concoct an activity that does.

In the open-air dining room, chefs cook meat in the earthen tandoor, pizza in the wood-fired oven and chicken skewers on an open barbecue. For breakfast, I tried the Treepod Dining experience. My waiter guided me along the coast to a tree from which a wooden pod dangled, looking like a giant acorn. After I’d settled at the table inside, the pod was winched up into the tree canopy.

At first, I thought my waiter had omitted something as my table was empty. Peering below, I looked down to query the whereabouts of my breakfast when I heard a whoop of metal behind me: my waiter was delivering my food along a zip-line through the trees.

I dined with views right out across the ocean (I wouldn’t book the experience after dark). 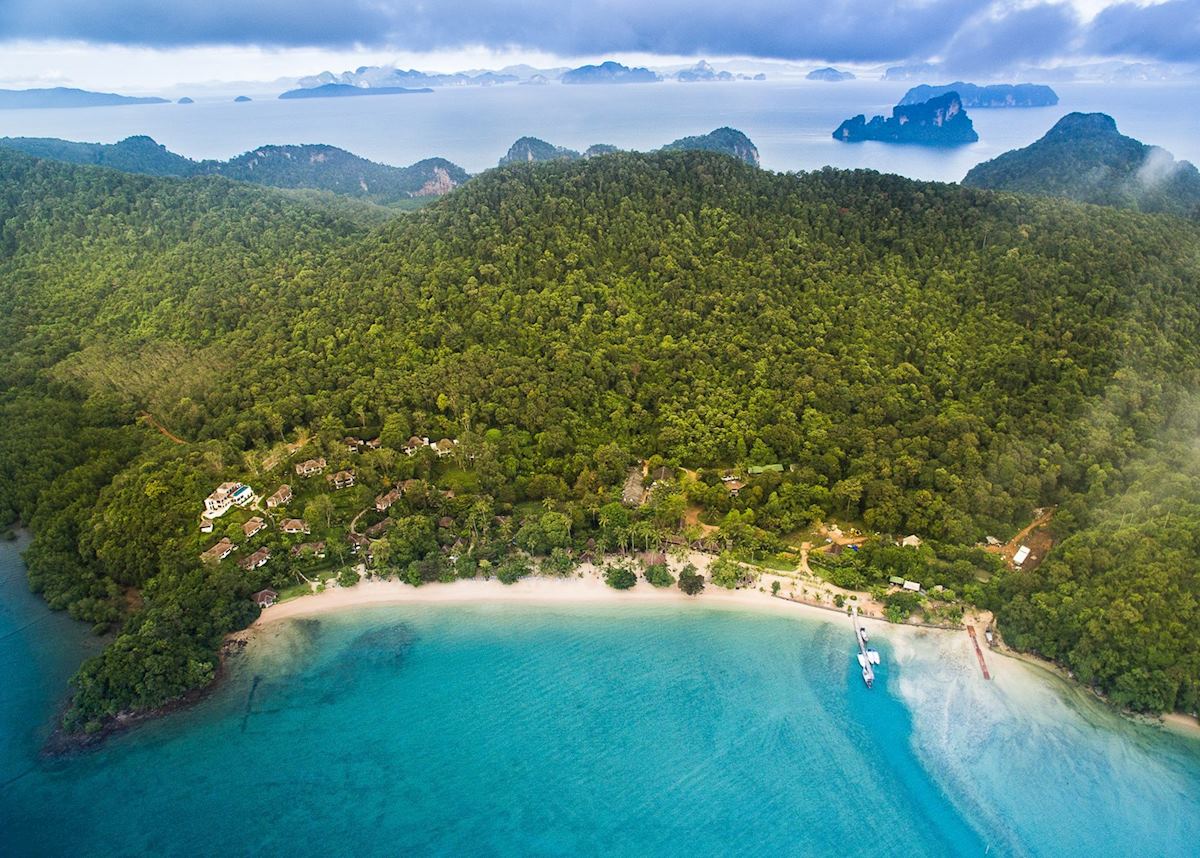 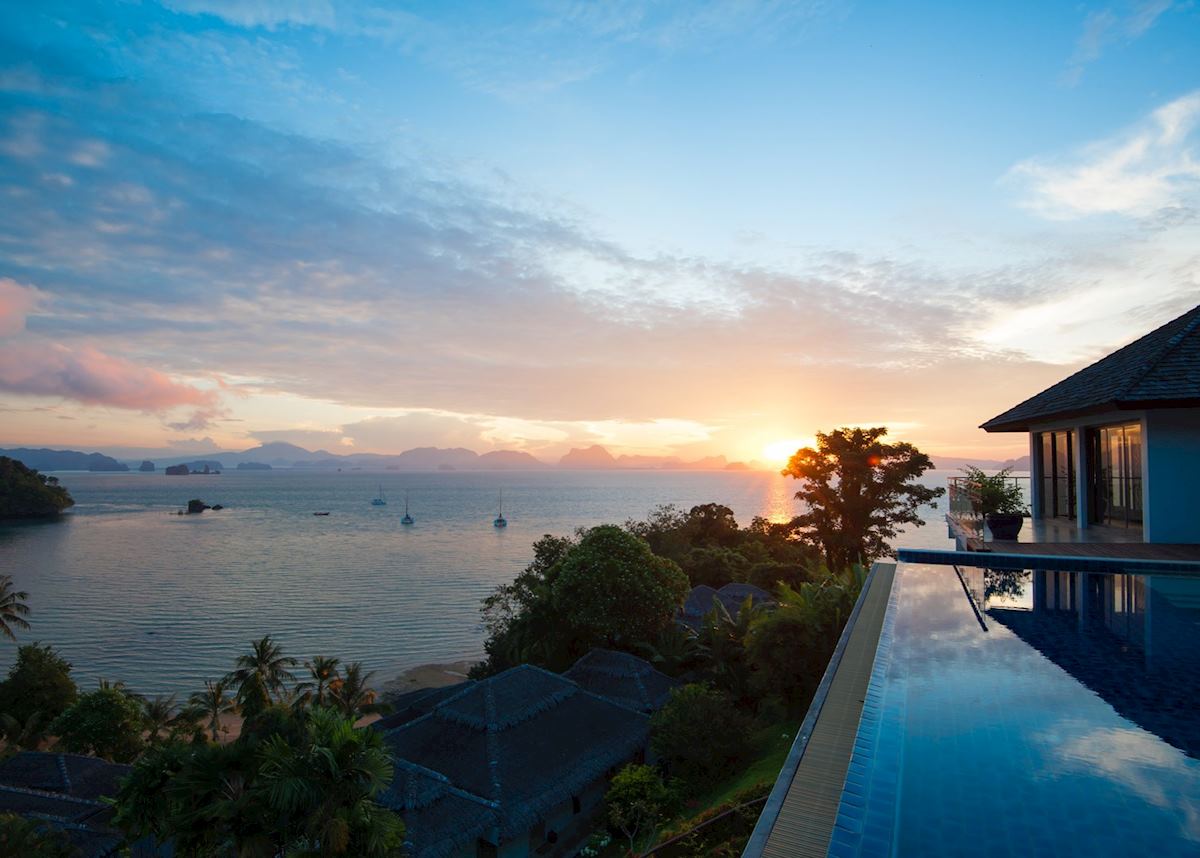 The shards of limestone that jut up from Phang Nga Bay have become Thailand’s calling card, attracting swathes of visitors as well as film crews and photographers (One of the bay’s islands, Ko Ta Pu, is colloquially known as ‘James Bond Island’ for its appearance in The Man with the Golden Gun.)

It’s possible to visit Phang Nga Bay in a day from Phuket, but it can be difficult to travel far enough to avoid the crowds. Stay on the island of Koh Yao Noi, though, and you’re already in the bay.

The Paradise is a hotel on a remote corner of Koh Yao Noi, set in its own bay. Its rooms are built into the limestone hillside that rises up behind the beach, and if you opt for the hilltop pool villa you can enjoy the sight of Phang Nga’s toothy limestone islands from your private pool. Only accessible by boat, it’s a resort that focuses on relaxation, with twice-daily yoga and meditation classes and a healthy cuisine menu to promote well-being.

Book a private boat tour and you can travel into the depths of the bay along narrow tidal channels, into the mangroves and gaping hôrng (semi-submerged caves). Set off in the early morning, and you might not see anyone else at all while you’re out.

With direct flights from Bangkok and a range of world-class hotels (I suggest the Four Seasons), the island of Koh Samui works well if you want a short beach stay before flying home. It’s also a base for exploring Ang Thong Marine National Park. An archipelago of 42 virgin islands that poke out of glassy waters, the park inspired the Utopian setting in Alex Garland’s novel The Beach.

It’s Thailand’s most-visited marine park and certain areas can get crowded, but you can charter a private speedboat tour, skippered by a local guide. Armed with sea kayaks, snorkels and a fridge full of cold drinks, you flit between turquoise lagoons and cliff-edged beaches as you please. 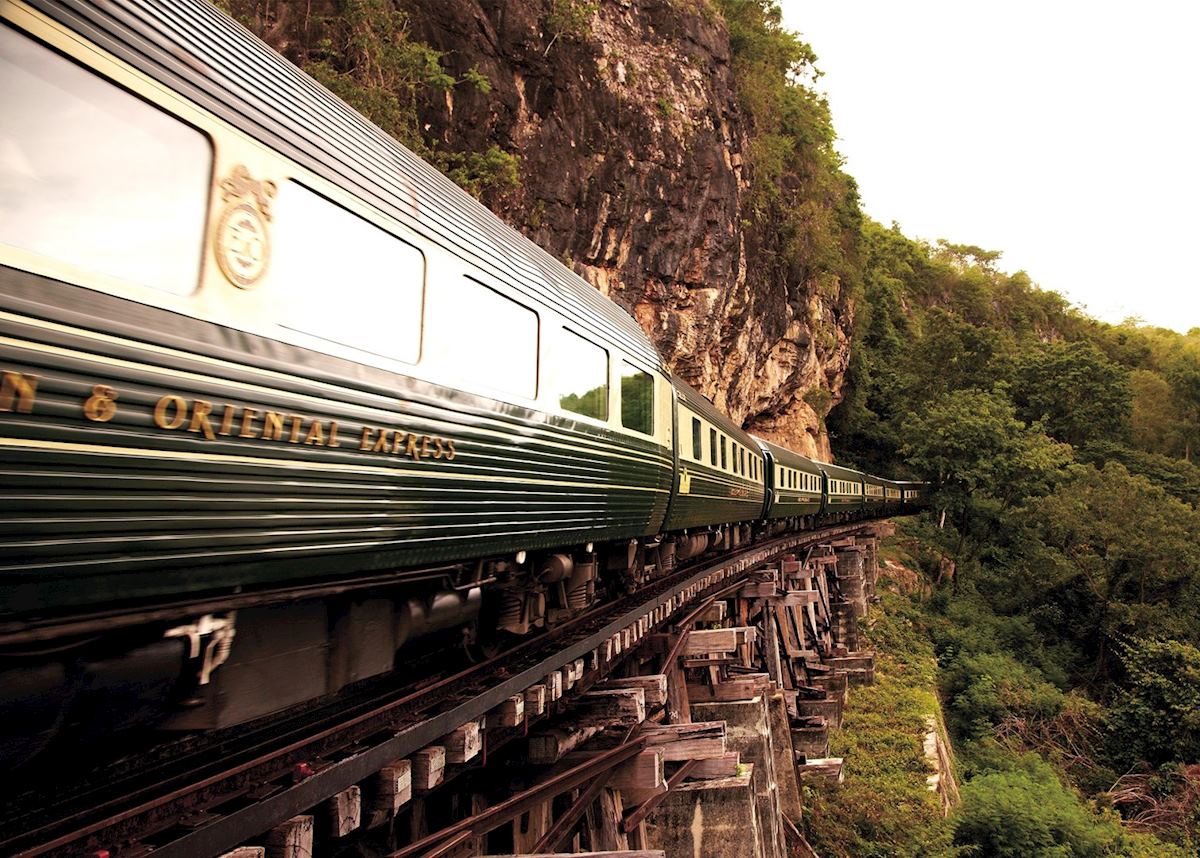 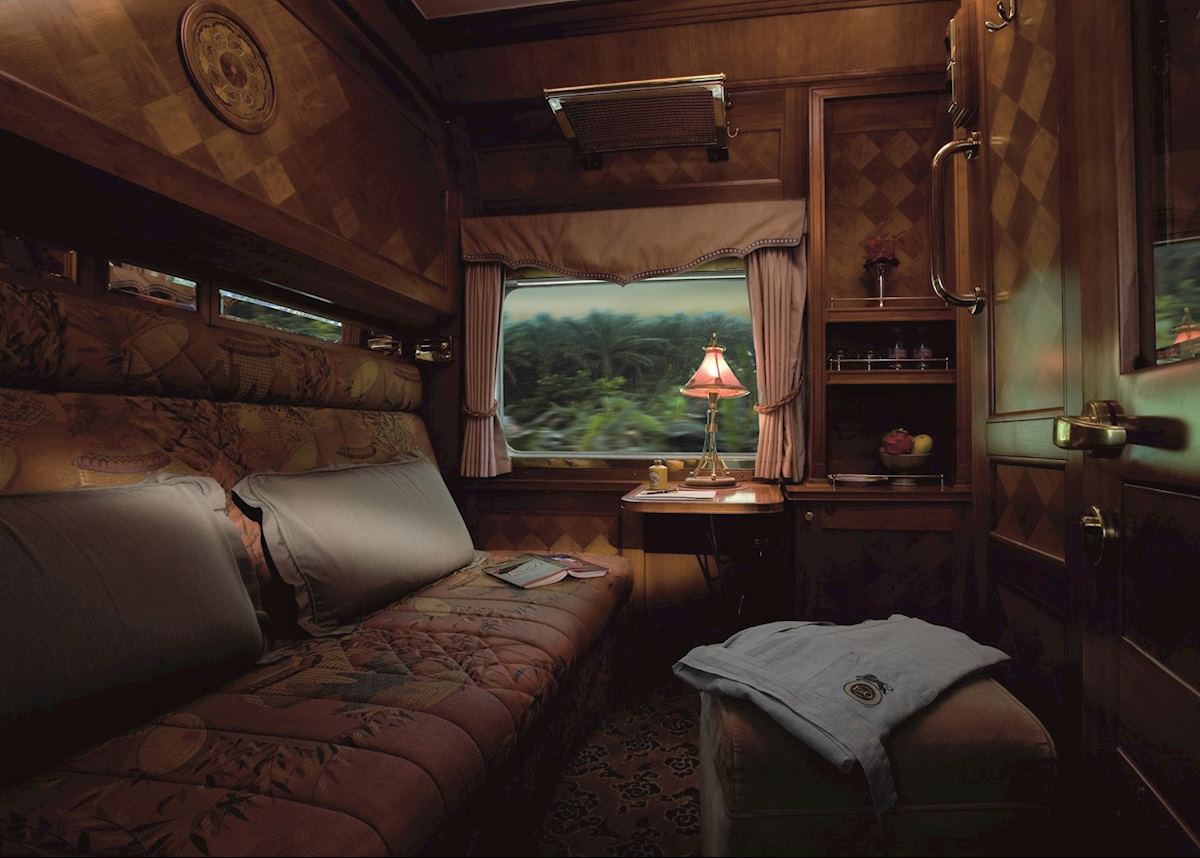 If you’re intending to extend your journey beyond Thailand, it’s easy to catch a short flight from Bangkok’s Suvarnabhumi Airport to one of the surrounding countries. But, I’d turn your attention to departing instead on the Eastern Orient Express. Before traversing south around the Gulf of Thailand, the train detours north to Kanchanaburi, where you can alight to visit the Bridge on the River Kwai and the Thai-Burma Railway Centre.

Many years ago, as a backpacker, I stood on a railway bridge in Kanchanaburi and watched as the glossy green, brass-trimmed carriages of the Eastern Orient Express passed by. Now, having seen it from the inside, I can vouch that it’s just as impressive, with private cabins and state rooms that your steward will convert from a lounge by day to sleeping quarters at night.

On the three-night journey, after detouring north, the train follows the Thai coastline, passing into Malaysia and finishing in Singapore. All meals are included, from cocktail receptions to afternoon tea. 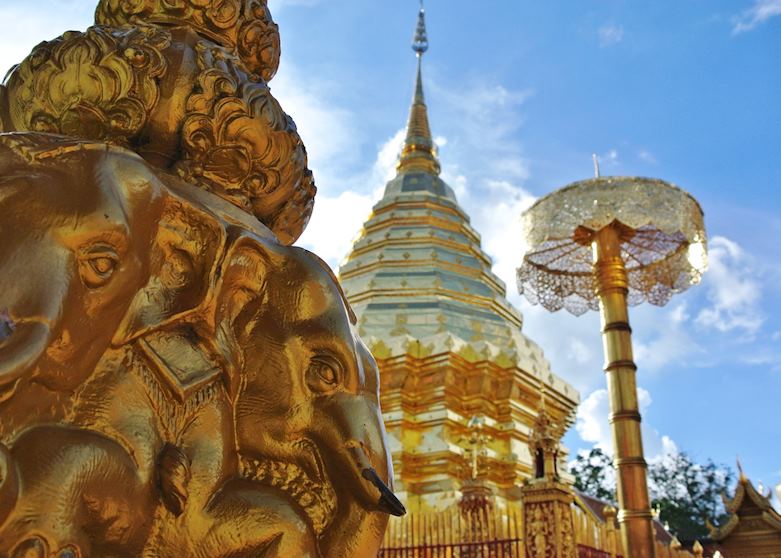 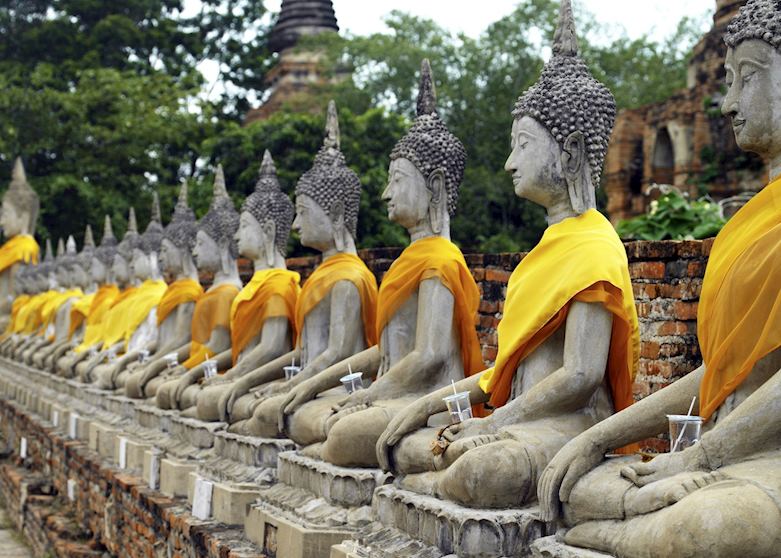 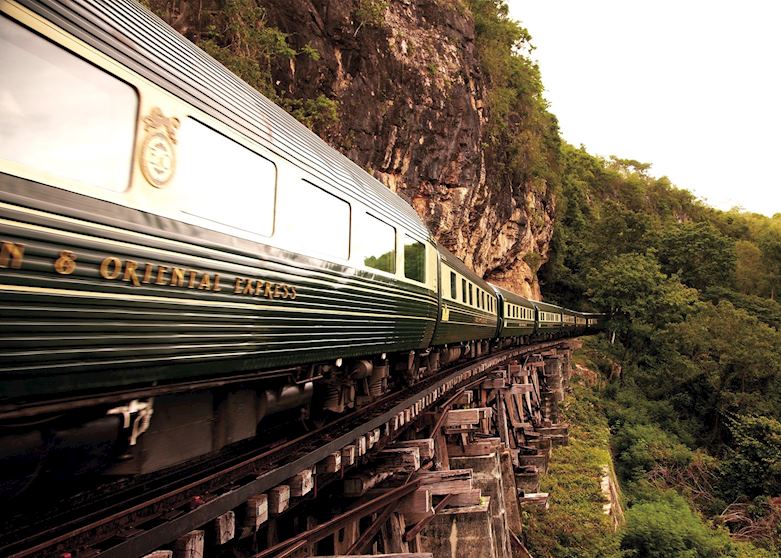 What to do in Thailand: our highlights guide Honeymoons in Thailand Cruising in Thailand More Audley luxury travel ideas