One of Italy's most unusual cities, Matera is also its oldest. The area was first settled in the 10th millennium BC, when people began to carve homes out of the soft volcanic rock that lines the ravine cleaving the modern-day town. The Romans established a settlement here in the 3rd century BC. Then, in the 7th and 8th centuries, monks built chapels into the stone, followed by local farmers seeking protection from attack. Eventually, the canyon sides became riddled with caves, connected by steps and streets.

I think that Matera is one of the most historically, intellectually and visually rich places in Italy, if not the world. The density of sandstone buildings and cave dwellings that fill the two hills make the town feel otherworldly.

Things to do in Matera

In recognition of its status as one of the oldest continuously inhabited cities in the world and its unusual troglodyte dwellings, the Sassi di Matera, the ancient part of the city, is now a UNESCO World Heritage Site. 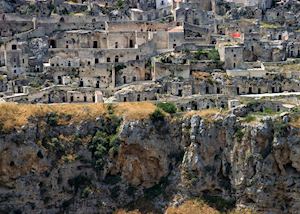 In the 18th century, wealthier inhabitants moved to the canyon top and established a new town. But, until about the 1950s roughly half the town's population lived in the sassi (cave dwellings). Poverty, malaria and dysentery were rife due to overcrowding and a lack of running water, electricity or a sewerage system. People and animals lived together, with large families cramped in small, makeshift houses.

With the sassi’s squalid conditions well known across Italy, the local government was forced to take action and eventually built new housing and forcibly relocated families. Not everyone was happy with the move, though, and older residents still speak mournfully about being ejected from their homes.

The old town's poignant history has now come full circle, however. The sassi have been gentrified and now house characterful hotels, bars, restaurants and pubs.

By night, Matera’s cliffsides twinkle with lights and by day you can wander along lanes and streets cut into the rock between the two districts of Barisano and Caveoso. There are more than 1,000 cave dwellings as well as shops, workshops, chapels and churches. You can visit sassi that have been refurbished to look as they would when they were evacuated, dine in ancient caves or explore the many rock churches.

In Caveoso, the churches of Santa Maria di Idris and Santa Lucia alle Malve have well-preserved Byzantine frescoes, while the Chiesa di San Pietro is larger and sits on the edge of a steep cliffside. Most vivid of all are the frescoes in the Cripta del Peccato Originale (Crypt of Original Sin), known as the 'Sistine Chapel of rupestrian art' for its scenes from the Old and New Testaments.

In the newer town on top of the canyon you'll find a 13th-century Romanesque cathedral with a neo-Baroque interior. Meander across Piazza Vittorio Veneto and you can look down onto the Byzantine remains of a castle, rock church and cistern. Or, visit the Museo Nazionale Ridola, which is set in a 17th-century convent and displays prehistoric and classical finds from the town and surrounding region. 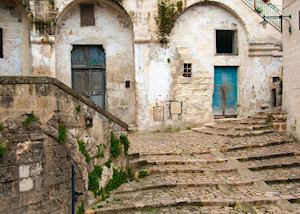 Unsurprisingly, Matera has been used as a film location on many occasions. It doubled as ancient Jerusalem in Pier Paolo Pasolini’s The Gospel According to St. Matthew and Mel Gibson’s The Passion of the Christ. The arts are particularly strong here, with many sassi containing art galleries and creative industries.

Strolling the streets today, it beggars belief that in the not too distant past Matera was 'the shame of Italy'. Its election as the 2019 European Capital of Culture (along with the Bulgarian city of Plovdiv) is a source of extreme pride for its residents.

Matera is a great place to visit at any time of year, although you’ll get the best weather conditions from April to October. July and August can get very hot with highs of 33°C (91°F) so visiting earlier or later in the season may be better for exploring. Although there’s more rain in winter, it’s a quieter period when Matera feels all the more authentic.

This sample itinerary will give you an idea of what is possible when you travel in Matera, and showcases routes we know work particularly well. Treat this as inspiration, because your trip will be created uniquely by one of our specialists.

We’ve selected a range of accommodation options for when you visit Matera. Our choices usually come recommended for their character, facilities and service or location. Our specialists always aim to suggest properties that match your preferences.

Our specialists seek out authentic ways to get to know the places that could feature in your trip. These activities reflect some of the experiences they've most enjoyed while visiting Matera, and which use the best local guides.